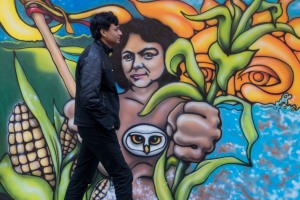 “We must shake our conscience free of the rapacious capitalism, racism, and patriarchy that will only assure our own self-destruction. Our Mother Earth — militarized, fenced-in, poisoned, a place where basic rights are systematically violated — demands that we take action.”—Berta Cáceres (1971-2016)

A decade ago, Aden Alvarenga fled everything he knew in Honduras for a land flowing with milk and honey called “California.” He journeyed north with his Tio Tejada who had been working with Berta Caceres to save sacred rivers from foreign developers cashing in on dam projects. In the months after the military coup, soldiers who were trained in the United States, ramped up their threats and intimidation on Tio and their band of Indigenous troublemakers. His witness protection program required drastic measures so he recruited his nephew to head north to stay with a cousin he barely knew in a place called San Juan Capistrano, named after a white priest who came to Turtle Island to forcibly convert Indigenous peoples to colonial Christianity.

Tio Tejada walked and talked like a Hebrew prophet. He was scripted by a roster of liberation theologians like Gustavo Gutierrez, Jon Sobrino and Dom Helder Camara. On their trek north, Tio would ramble on and on about the idols, abominations, transgressions and sins of apostasy of the American empire. Tio revered the Salvadoran theologian-martyr Ignacio Ellacuria who prescribed a copro-analysis of American culture—a study of its feces. What is consumed and digested by El Norte is delivered to plates and porches by excluding, exploiting and extracting from crucified ones in the Global South, like Aden and Tio.  For 500 years, the land of Tio’s Lenca ancestors had been hoodwinked into the white man’s world of intimidation, deception and hoarding.

What were these dark-skinned Spanish speakers like Aden and Tio doing heading for the epicenter of hell itself? It was sheer survival. Physically and economically. Tio took strange comfort, however, in the undeniable fact that they looked far more like Jesús of Nazareth than the paintings of the white Jesus and his white sheep that were hanging on the walls of approximately 73% of the churches in the States. Perhaps even more, Tio shimmered in solidarity with Jesús and his parents Maria and Jose who were themselves undocumented refugees fleeing Herod’s own coup d’etat killing sprees. Like Jesús, Aden and Tio were fundamentally shaped by resistance.

“Está todo bien,” Tio would sermonize, because the One who liberated the Hebrews from violent captivity implored the former slaves in the wilderness to never fuck with the widow, the orphan and the alien in their midst. That’s right: alien. That word was sacred to Tio. After their coyote-free border crossing, he landed a job at A’s Burgers, a legendary walk-up counter diner just off the 5 freeway in South Orange County. It didn’t happen very often, but a dozen times a year he’d hear a derisive “illegal alien” bomb flying out of the mouths of his white customers. Sometimes, it was even dropped late on Sunday mornings as the chele would roll in after their Sunday sermon to pick up a bag of breakfast burritos and a cardboard tray piled high with fried zucchini.

This is how it was in the empire. Everything was turned upside down like a chicken roasting over the fire. American culture was como un pollo loco. What was more painful than the disparaging words was the way that white Christians rendered him invisible. Like a virus. However, Tio was fluent in things secret and sacred. Like the Israelites in Egypt, people like him, far more resilient and responsible than they were ever given credit, were becoming more numerous and powerful than white America. The shrewd and oppressive ways and means of the taskmasters would soon reach a tipping point. Then the plague would come to level the playing field.

Aden reached out via Facebook messenger to see how I was holding up. It was ten days after Bernie got his ass kicked on (un)Super Tuesday and just 48 hours after the NCAA college basketball tournament was cancelled. He knew I was hurting. Aden and I first met in the Fall of 2010. We were standing in the searing September sun on the track at the high school I taught at. One of the P.E. teachers flagged me down in the hallway to implore me that this skinny ass freshmen who barely spoke English should not be wasting his talent in P.E. He should be killing it in cross country with us after school. Aden wasn’t fast. He was just courageous, tenacious, resilient, injury-proof and unrelenting. He would push himself to puke and then turn it into another gear. We went all-out all the time.

By his senior year, he was consistently our number two varsity runner. But he was the most beloved. By far. He was unanimously voted the captain of the team and he knew every kid’s name, even the slowest freshmen who had to walk during our long runs and struggled to make it up “the Beast” on Tuesday afternoons. These, too, were precious and every bit a part of the team. Aden’s capacity for kindness and comedy made every practice feel like the best church service you could ever dream up. He wore the same shirt to every meet. It was brown with white letters that read: “I’m the lazy Latino that your dad warned you about.” Most of the parents didn’t know whether to laugh or cry. But they screamed with delight when he’d kick just about every white boy’s ass in just about every race.

A decade later, he was a college graduate and in the final days of his 14-day quarantine. He came down with mild symptoms one night after his 12-hour shift at his job managing the Pupuseria his Tio now owned. He came down with a persistent dry cough and the heaviest exhaustion that he’d ever felt in his entire life. And Aden has been well-acquainted with exhaustion. However, he wasn’t really messaging me to check up or share the news of his COVID-19 positivity. He had a secret that he desperately needed to share with someone outside of his friend and family network. Aden halted his usual crystal-clear transparency because, for his inner circle, this might just be the final nail in the coffin. They’d institutionalize him. Or just ghost him. He wasn’t sure which would be worse.

That afternoon, Aden confessed to me that, after three straight days splayed out on his couch watching marathon Presidential press conferences that were mind-blowingly un-Presidential, he had developed the absolutely and completely bat-shit crazy ability to see COVID-19. That’s right: wherever the virus was lurking, his sight-lines were tinted red. It got real when he stood in front of the mirror and his lungs were glowing and pulsing through his skin just like when E.T. caught the virus and had to phone home back in 1982 at the beginning of the Reagan Revolution. Then, Aden biked sixteen blocks to the hospital and the entire building looked like it was on fire.

It made sense to me right away. This young man, representing a people derided and scapegoated and caged and deported by this President of the United States, became a walking, talking COVID-19 test kit far quicker than any corporation could develop one. “But here’s the thing,” I told him over a Zoom call later, “It makes a lot of fucking sense that you have this superpower, right? You’ve always seen the things that all the white kids couldn’t.” And for the past decade, he’d been surrounded by hordes of white kids. And they couldn’t see shit. More on point, they were trained to not see the things that mattered most.

Ever since the day that he and Tio Tejada left their native land and crossed the Suchiate River into Mexico on rafts made of tractor tires and hopped on El Tren de la Muerte for 13 hours and then fled the notorious Los Zetos drug cartel in Oaxaca and then took 8 or 9 more trains before they hiked through the desert into empire, Aden had been starring in an M. Night Shyamalan movie. He couldn’t see dead people. But he could see what was actually killing them. Capitalism. Racism. Patriarchy. All the idols, abominations, transgressions and sins of apostasy that had been targeting him and Tio, from Honduras to Huntington Beach.

Aden and his Tio Tejada migrated right into a spiritual pandemic. An entire population afflicted with conscientious blindness. They conveniently couldn’t see the invisible realities that were subsidizing their middle-class lifestyles. If they somehow did see them, they’d feel strapped by the deep shame of complicity and they’d have to do something about it. Or even worse for their souls: they would have to repress it.

Over the past decade, Aden had seen a few white folks have Damascus Road experiences. After a documentary. After a lecture in a college social science course. After reading The New Jim Crow or Between the World and Me. Or after that scene towards the end of Green Book when they walk into the juke joint and the heavens are torn apart and Spirit descended like a dove. But the more they broke rank with their friends and families, the less they fit in. They were citizens of Egypt trying like hell to take the side of the Hebrews. But it sure was painful for Aden to watch sincere white friends awkwardly cross the fine line between being white allies and being white saviors.

When it came to electoral politics, Aden and his woke white friends didn’t fit into either major party because, ever since the day Dr. King got shot, the GOP and Dems had been trying to out-tough each other as they competed for the white male vote. Both parties slashed “welfare” and corporate regulations while they injected steroids into police, prisons and the military. Aden once told me on a long run along San Juan Creek to the Pacific, “With his right hand, Obama baptized us Dreamers into the fold and with his left hand, he was locking up our older relatives in ICE detention centers.” For decades, both parties had signed off on financially and militarily supporting the corporate devastation of his native Honduras.

And yet, Aden, who turned 18 three days before the election in 2012, would have voted for Obama, whose brilliance and grace were unprecedented in the White House. If the federal government would’ve only let him. “The white guys on the right,” Aden texted me later that night, “know that it is in their best interest to limit the vote to natural born citizens and then make it as hard as possible for the most vulnerable among them to get to the polls.” Aden did not need superpowers for his statement to test positive. Trump admitted it the next day on Fox News.

Tommy Airey is a retired high school teacher and once-upon-a-time Evangelical pastor.
He and his wife, Lindsay, are blending a vocation of “soul accompaniment:” one part
pastoral-counseling, one part spiritual-directing, one part advocating-for-the-most-
marginalized. Tommy is the co-curator of RadicalDiscipleship.Net, book review editor for Geez Magazine and author of Descending Like a Dove: Adventures in Decolonizing Evangelical Christianity (2018).