Have you seen the Dos Equis commercials starring actor Jonathan Goldsmith as “the most interesting man in the world”? “People hang on his every word,” the narrator intones, “even the prepositions.” Though the ad is clever and funny, the “Stay thirsty, my friends” tagline makes clear that what’s being sold is unquenchable thirst.

Contrast this with the Samaritan woman Jesus meets at the well. What’s on offer in John 4 is “living water.” But obtaining it requires a more daring leap than the short-term gains of “Interesting Man’s” carpe diem philosophy.

Who is the Samaritan woman with whom Jesus holds his longest discussion in the gospels? First, let’s clarify what she is not. She is not a whore, nor promiscuous. She’s not spiritually dead or “hopelessly carnal,” as some male interpreters have claimed. END_OF_DOCUMENT_TOKEN_TO_BE_REPLACED 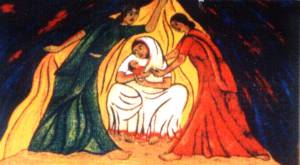 Third post in the series on radical biblical women. Written by Amanda Dalosio who lives in NYC with her family and is part of the New York Catholic Worker community.

Exodus 1:15 The king of Egypt said to the Hebrew midwives, one of whom was named Shiphrah and the other Puah, 16 “When you act as midwives to the Hebrew women, and see them on the birthstool, if it is a boy, kill him; but if it is a girl, she shall live.” 17 But the midwives feared God; they did not do as the king of Egypt commanded them, but they let the boys live. 18 So the king of Egypt summoned the midwives and said to them, “Why have you done this, and allowed the boys to live?” 19 The midwives said to Pharaoh, “Because the Hebrew women are not like the Egyptian women; for they are vigorous and give birth before the midwife comes to them.” 20 So God dealt well with the midwives; and the people multiplied and became very strong.

The account of the two midwives, Shiphrah and Puah, is set in a scene of overwhelming cruelty and oppression. The King of Egypt has enslaved the people of Israel having set taskmasters over them to oppress them with forced labor Ex1:11 who are ruthless in all the tasks that they imposed on them Ex 1:14. Yet out of this misery comes a moment of great courage. The women disregard the edict of death imposed by the empire and instead choose to remain faithful to life. And so is recounted the first biblical example of individual moral resistance to an empire.        END_OF_DOCUMENT_TOKEN_TO_BE_REPLACED

Sarah Holst’s art and reflection is the second installment on our monthly bad-ass biblical women series. If you would like to contribute to the series, email lydiaiwk@gmail.com.
By Sarah Holst
Last year I attended a workshop led by Onleilove Alston on her work uncovering and uplifting the Black Presence in the Bible.  She spoke about the Black Madonna and the importance of reading Mary of Nazareth in the context of her economic, political and cultural setting: a very young woman with brown skin, turned-out, looked-over, and, as poet Kathleen Norris puts it, “capable of walking the hill country of Judea and giving birth in a barn.”  This is the historical Mary that was called to participate in liberation and redemption, smuggling God into the world inside of her body.

END_OF_DOCUMENT_TOKEN_TO_BE_REPLACED

This month, we are beginning a year long monthly series on biblical women. Women from around Turtle Island will be honoring the women in scripture with poetry, art, storytelling, and love. This month, Joyce Hollyday starts the series with Jephthah’s daughter. If you are interested in contributing to the series, email lydiaiwk@gmail.com.

Her name is lost to us—excised by the male chroniclers of faith history who understood that to name something was to give it power. And she was about as powerless as anyone could be. Jephthah’s daughter. Young, naïve, and female. Defined, possessed, and controlled by a violent and volatile warrior-father who ended her life in a ritual murder.

So, why launch a series on biblical women with such a tragic tale? Because Jephthah’s daughter is with us still. Her story is present among us in every form of male control: in the assumption that those of us who marry men will take their names and those who choose women must be “set straight”; in domestic violence and discriminatory pay; in denial of education and forced child marriages; in genital mutilation, sexual slavery, and female infanticide. END_OF_DOCUMENT_TOKEN_TO_BE_REPLACED