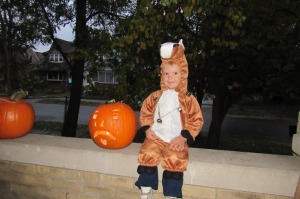 By Lydia Wylie-Kellermann as part of her series on parenting- Learning from Laughter.

With the table covered in newspaper, the three of us began carving pumpkins. Isaac embraced the gunk helping to pull it out while the Halloween music played and the moon shown out the window. When it came time to cut the faces, I sat beside him and asked what he wanted. We drew it out together in marker. He told me he wanted square eyes and a triangle nose. Out of the blue he insisted that the pumpkin have a mustache. Then I asked about the mouth. Do you want a smile? “No. It’s a sad pumpkin.” I tried to draw a sad mouth. Then he said “Pumpkin crying.” He was asking for tears. I carved out some tears falling from the square eyes. He smiled in total delight and pride at his sad pumpkin. END_OF_DOCUMENT_TOKEN_TO_BE_REPLACED