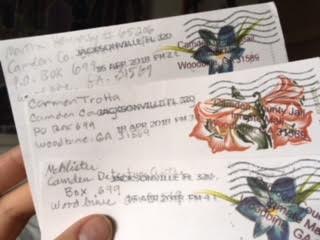 Our friend Mark sits in a jail cell again
and I stand in the lunch hour line
under fluorescent lights
at the post office with my toddler
to buy a stack of pre-stamped postcards,
the only kind acceptable to mail,
written only in blue or black ink,
no stickers, glue, glitter, or pictures,
no letters or packages. END_OF_DOCUMENT_TOKEN_TO_BE_REPLACED

Folks in upstate NY have been engaging in a long-term campaign of civil disobedience in resistance to drone warfare. Below is the reported testimony at Mark Coleville’s trial as reported on http://upstatedroneaction.org.

Mark Colville, a Catholic Worker from New Haven, Connecticut, was tried on September 18 and 19 on five charges stemming from a peaceful, nonviolent protest at Hancock Air National Guard Base, which is a drone control site located outside Syracuse, New York.    His Sentencing Hearing is coming up on December 3. Mark, who faced the court pro-se (presenting his own defense rather than having an attorney do it) was tried in DeWitt Town Court before a jury of 6 persons, with Judge Robert Jokl presiding. Mark was charged with 3 Violations: Trespass and 2 counts of Disorderly Conduct; and 2 Misdemeanors: Obstructing Governmental Administration and Contempt of a Court Order. END_OF_DOCUMENT_TOKEN_TO_BE_REPLACED