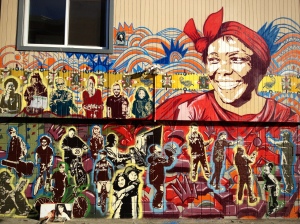 As I reflected on today’s readings, the theme they seemed to weave together is to begin Lent by reviewing our stories. With the First Reading, in which the writers of Deuteronomy are giving the reader a sort of Last Will and Testament of Moses, God’s people are reminded of their history and God’s presence in it. They are told to recount that history in ritual and celebration. We are also being reminded to reflect on our personal intergenerational stories. Who were our ancestors? How was God with them as they journeyed? How do their stories impact your story? How has God’s presence in all of our stories led us to where we are today: physically, socially, emotionally and spiritually? The First Reading reminds us to ponder these questions as we reflect on our stories. END_OF_DOCUMENT_TOKEN_TO_BE_REPLACED

Canon Ginny on the shores of the Yukon River. Credit The Rev. Belle Mickelson.

For he will deliver you from the snare of the fowler
and from the deadly pestilence;
he will cover you with his pinions,
and under his wings you will find refuge;
his faithfulness is a shield and buckler.
You will not fear the terror of the night,
or the arrow that flies by day Psalm 91:2-4

those who wait for the Lord shall renew their strength,
they shall mount up with wings like eagles,
they shall run and not be weary,
they shall walk and not faint. Isaiah 40:31

I met Mark MacDonald (National Indigenous Bishop of the Anglican Church of Canada) in the mid 1980’s at an Urban Indian ministry meeting in the States. He brought out his guitar and started playing this song called “On Eagle’s Wings,” written by Michael Joncas. I had not heard it but really liked it. It is based on Psalm 91 but the chorus from Isaiah goes like this: “and he will raise you up on Eagle’s wings, bear you on the breath of dawn; make you to shine like the sun, and hold you in the palm of his hands.” That song became the national anthem of Indian work in the Episcopal Church and was also know as “Mark’s song.” I was at another meeting and requested “On Eagle’s Wings” but was told, “That’s Father Mark’s song, we can’t sing it without him.” END_OF_DOCUMENT_TOKEN_TO_BE_REPLACED