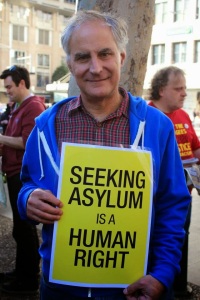 Today, we share a Facebook Post (and highlights of an ongoing strand from Friday, Sept 12) from Dr. Wes Howard-Brook, former attorney and, currently, a professor of Theology & Scripture at Seattle University. Social media has all sorts of issues, but sometimes it can serve as a really helpful forum for “overhearing” conversations about vital issues. This strand focuses on the issue of ongoing violence in the Middle East, ISIS (and other “terrorist” groups) and, specifically, the role of the American Empire in the whole affair.
——————-
Wes Howard-Brook: It’s so great to see that the Republicans and Obama agree on something. Bombing the hell out of civilians is always a popular tactic.

A friend commented: Please tell us how you would handle ISIS? Really want to know.

WHB: Why is it the job of the president of the US to “handle” a violent group halfway around the world. What has he done about, say, the Shining Path in Peru, the FARC in Colombia, the repressive and violent governments in Africa and elsewhere? And even if he actually cared about the people of Syria and Iraq (which he obviously doesn’t, given how he allowed Assad to murder hundreds of thousands of his own people, and was part of the murder of more than a million people in Iraq by US sanctions and bombing), how does bombing stop a terrorist group that blends in with the population. Have we learned nothing since Vietnam? Answer: yes, we have. Bombing is very lucrative for the “friends” who support whoever is in charge of the empire.

Friend responded: So you would just ignore, like in Syria? Maybe that is the best way forward.

WHB: No, I wouldn’t ignore. I would support nonviolent efforts at reconciliation, peaceful interventions (such as CPT) and a provision of food, medicine and other resources to the peoples of Syria and Iraq so that they wouldn’t be breeding grounds for anti-American terrorism. As Paul says,

Rejoice with those who rejoice, weep with those who weep. Live in harmony with one another; do not be haughty, but associate with the lowly; do not claim to be wiser than you are. Do not repay anyone evil for evil, but take thought for what is noble in the sight of all. If it is possible, so far as it depends on you, live peaceably with all. Beloved, never avenge yourselves, but leave room for the wrath of God; for it is written, “Vengeance is mine, I will repay, says the Lord.” No, “if your enemies are hungry, feed them; if they are thirsty, give them something to drink; for by doing this you will heap burning coals on their heads.” Do not be overcome by evil, but overcome evil with good.
(Romans 12.15-21)

Friend responded: Sorry, what is CPT? And can you give some examples of non-violent reconciliation efforts in Syria and Iraq? Really want to know. I think all this should be led locally, which is why I am asking.

WHB: CPT is Christian Peacemaker Teams. I’m sure Tim Nafziger or Sarah Thompson can fill you in on that. I don’t know of specific efforts on the ground in those places, so I can’t help you on that point. But I do know that it has been conclusively proven that nonviolence is more effective than violence in situations like this. See this.

Friend responded: Thank you. Excellent article, and i absolutely agree. How would you impliment in Iraq and Syria, assuming we cannot respectfully use Christian teams?

WHB: This is why, [Friend], I don’t generally see this, like you, as a “problem” to be “solved” by the US government. People on the ground, with actual relationships, are the ones who can bring peace. The primary underlying issue is, of course, oil. If the US were to stop the use of fossil fuels (a point on which I know you and I are in agreement) and developed clean, renewable energy, there would not be a problem like this at all. If the US government wants to “do something” to placate the crowds, providing food, water, and so forth would be the best option. Imagine if all the trillions spent to kill people were used to feed and shelter them: then the US would be the most popular nation in the world, instead of one of the most hated.

Sarah Thompson (executive director of Christian Peacemaker Teams): CPT does have Christian-indentifed teams in Iraq (since 2003) and is now accompanying Syrian refugees and their stories (since early 2014) and we also have folks on CPT teams identified with other faith traditions. We do not proseltyze and we follow local leading and the invitation of local partners only. Before IS intensity, there was a lot of violence already, some from oil companies. There is a youtube video we took of it Voice of the People. And news from CPTnet will have more info.