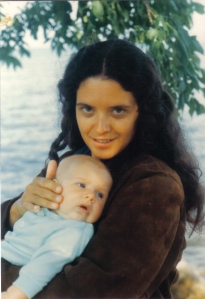 Written by Jeanie Wylie-Kellermann, she reflects on the decision of whether to baptize her daughter, Lydia. Jeanie was a writer, activist, and mother. She died after a long fight with brain cancer in 2005. This piece was published in 1986 for Detroit’s Catholic Worker paper On the Edge.

I didn’t want to baptize Lydia.

My love for her took me off guard. I’d only been able to see her and touch her for a few hours and already I wanted the world for her. I studied her while she lay in my arms to eat and she stared back. I cried often. I was overwhelmed.

In a quick constrictive moment, I wanted to draw a circle in the dirt around Bill and Lydia and me. I envisioned a brick tower rising on the circle and securing us from intrusions which might not honor the bond of love and satisfaction that held us together. I never wanted her hurt. I cried when she cried. In the flush of raging feelings which came with the afterbirth, I became anxious and impatient if nothing could be done to calm my child. Having entertained the thought, “Even if she dies tomorrow it will all have been worth it, just to know her,” I was terrified that she would die. Die, leaving a void like my father had when I was seventeen. Sacrificed on an altar to a God who routinely asks too much. I was simultaneously struck by the magnificence of what God could create and singularly disinterested in hearing the voice of that God again.

And then came the question of baptism. Water, words, community. Offering our child back to God. We would stand with Abraham at the sacrifice. We would give her to a God who models the cross. We would invite her to listen for a voice calling in the night, to vigil, to put herself at risk, to leave family and friends, to speak clearly a truth for while one can be executed. We would thereby invite her into the risks we have already elected and, by God’s grace, still will elect to take with our own lives. In the act of baptism we would wash away the possibility that our concern for her might justify a diminishing of our own obedience to our Lord’s perverse ethic of vulnerability and gain through loss.

Bill and I like our lives. Not to aggrandize the risks we do take nor to minimize that much more compelling risks taken by those living the gospel in places like Guatemala, we are nonetheless sometimes frightened. We are sometimes pushed to our limits. For the most part, I think we find the way we live exhilarating. However, this sense of freedom does not extend to any harm of long-term separation overtaking Lydia.

It’s a challenge to resist the impulse to open an IRA for her college education. We’re still planning to put her in a public school, but we are already filling out forms in an effort to determining which one.

The temptations are many.

The neighborhood. Is a home that’s been adequate for us, despite the multiple times that Jackie Trosper has broken in our back down, adequate for her? There have been seven fires in as many months in what we believe is a deliberate policy of neglect and abuse which will open up land for development. One of our neighbors is in jail for raping a child. And then, a furnace man told us two years ago that our furnace has to be replaced. At worst, he said, it could explode. One question we can postpone for several years: Where will Lydia play?

Tax resistance. Is it reasonable? Certainly it leaves us wide open at all times to the intrusion of the state. And we don’t really know the stakes. We’re willing to surrender our property, but would they jail Bill? Me? What would become of Lydia? Surely she has a right to her parents.

But then we ask ourselves what it means if the introduction of one child changes the way we understand all that we do. If this child reorders our priorities, who then will we be?

When entertaining the alternative of baptizing Lydia into this life, I finally found some resolve. I pictured her raised in the suburbs, sheltered, provided for with life insurance and college savings. Nonetheless, it was still not within our power to insulate her from nuclear threats, or cultural violence, or a society coming apart at the seams. In fact, in this scenario, I would have denied her the company of God, the only companion promising hope that all this can be redeemed.

Another alternative that falls between suburban security and our current life also seems to me to eventually promise the same thing for us. Bill and I could get, or keep, movement jobs and responsibilities. We could move to a safer neighborhood with good schools. We could pay our federal taxes, but make our concerns known to our elected representatives. We could send money to various special interest groups and teach Lydia about global relationship and the need to have respect for other cultures, for the environment, for peacemaking.

And there is nothing wrong with such a life.

But when I picture it for us, I am sad. The sadness stems from the knowledge that, whatever rationales we could offer, we would be setting limits on what we were willing to offer to God. Out child’s welfare and security would be sacrosanct and other commitments would slide. I could imagine that some of those securities would come to lay a claim on us and endure even after Lydia was grown.

But is it too strong to say, as I just did, that altering our lifestyle of provide more money, comfort, beautify, and security would be denying Lydia the company of God? Perhaps—in that nothing we do can separate her from the love of God. But I do believe that it would distance us as a family.

At our marriage Bill and I repeated John Wesley’s Covenant Prayer:

Lord God, I am no longer my own, but thine. Put me to what though wilt, rank me with whom thou wilt; put me to doing, out me to suffering; let me be employed for thee, exalted for thee or brought low for thee; let me be full, met me be empty; let me have all things, let me have nothing; I freely and heartily yield all things to thy pleasure and disposal.

And now, O God… thou art mine and I am thine. So be it. And the covenant which I have made on earth, let it be ratified in heaven.

It is something that we want very much to live. Individually, Bill and I had discovered some areas where we felt particularly vulnerable to God. Many of them overlapped—like our experience that the Bible makes very clear sense to us while in jail and our feeling that there is a (perverse) value in having to wonder if your house has been broken into or if everything you have accumulated has been burned to the ground. To insulate ourselves would be to shield ourselves from times and places where we have heard God’s voice. It would make us less able to share with Lydia and to demonstrate to her the nature of our faith.

And in so doing, we smash an idol.

The child is no longer a reason to flee from the voice of God. Instead, we carry the child, with our hearts, toward the one who utters us and calls us into being. We claim our lives in that voice and entrust each other’s to it. We loosen our hold, our desperate grip, on each other’s presence and well being.

With Abraham, we can—at God’s suggestion—five back our claim to descendants as numerous as the stars. It is enough, it is more than enough to be loved by God. Our child is safe in covenant with our God who is neither predictable nor always comfortable, but she will find there a hand that wipes away her tears, an end to her thirst and a wind that sets her loose.

On June 13, Lydia Irene was baptized with water and the spirit. She was sealed as Christ’s own forever. She, and we again with her, died in Christ.

Recently we learned that a picture of Lydia is pasted to a prison wall in Fort Worth, Texas. Ardeth Platte, who is serving six months for trespassing, leafleting and praying at Wurtsmith Air Force Base, writes:

Lydia is now pictured in the midst of the many children of all races posted above my bunk. At night, the birthing of peace leaps throughout me as I glance at them, the future justice and peace creators. In the middle of the children’s pictures is the eight Day Center’s photo of a child releasing a dove at the bombs stretched behind Eisenhower’s statement:

“Every gun that is made, every warship launched, every rocket fired signified, in the final sense, a theft from those who hunger and are not fed, those who are cold and are not clothed. This world in arms is not spending money alone. It is spending the sweat of its laborers, the genius of its scientists, the hopes of its children.”

Lydia is in good company. I can guarantee you that this tac board display provokes my thoughts, challenges my commitment and dedication and keeps us praising God.

A high school friend of mine, a Chicago stockbroker and a mother, recently visited us. She was appalled by our block, felt unsafe in our home and was angry at us for raising Lydia here.

We cant say with certainty which decisions we’ll make in the years to come. We know they are hard and will grow harder as she grows older.

A year ago, a group of us met to discuss such issues. The meeting was prompted in part by my fear that carious families would decide to move without consulting each other and that we would end up hopelessly scattered. An alternative that I saw then, and that I still hope for, would be for us to move closer together. I’m sure that if we moved onto one or two blocks, we could offer strong community for our children and also stay in the city. We would be offering each other’s children peers that are also being taught not to steal, not to lie, not to believe that fighting is impressive. We could rely on our friends to keep and eye on the children playing outdoors. And we could visit each other, without having to get everyone into assorted car seats, when we needed a break from solo childcare.

There are many things that make choosing to raise Lydia in this neighborhood sane. We’d like her to be familiar with the soup kitchen and to understand with her heart the object lessons that are apparent in hunger and charred, vacant homes.

But one of the greatest gifts we feel she can receive is a life in this community: we want her to know and feel the love of people who are alive, who don’t give a damn about money and who are willing to do with their lives what they think God is asking.

At the last Detroit Peace Community retreat, in the midst of conversation about fear—of violence, of crime, of risk—Kit Concannon said she lived the way she did because “I have all of you.”

I cant think of a better gift. We give thanks for this community now and in the days to come.

2 thoughts on “Within a Communion of Children”