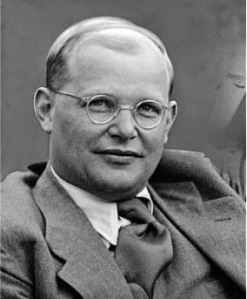 Tomorrow is the 70th anniversary of the execution of German theologian and martyr Dietrich Bonhoeffer. During his short time in America, Bonhoeffer was a trailblazer in learning from his African-American brothers and sisters, as reported by James Cone in The Cross & The Lynching Tree (2011):

In contrast to [Reinhold] Niebuhr and other professors at Union Seminary, the German theologian Dietrich Bonhoeffer, during his year of study at Union (1930-31), showed an existential interest in blacks, befriending a black student named Franklin Fisher, attending and teaching Bible study and Sunday school, and even preaching at Abyssianian Baptist Church in Harlem. Bonhoeffer also read widely in African American history and literature, including Walter White’s Rope and Faggot on the history of lynching, read about the burning of Raymond Gunn in Maryville, Missouri (Jan 12, 1931) , in the Literary Digest, “the first lynching in 1931,” and expressed his outrage over the “infamous Scottsboro trial.” He also wrote about the “Negro Church,” the “black Christ” and “white Christ” in the writings of the black poet Countee Cullen, read Alain Locke and Langston Hughes, and regarded the spirituals” as the “most influential contribution made by the negro to American Christianity.” Some of Bonhoeffer’s white friends wondered whether he was becoming too involved in the Negro community.