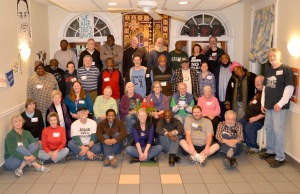 By Melvin Jones of the Open Door Community of Atlanta

*This piece was first published in the April 2015 issue of Hospitality.
———————-
August 29, 2014, marked my 20th year of being buried in the bowels of the beast. On August 29, 1994, my DeKalb County judge sentenced me to 20 years imprisonment for a voluntary manslaughter conviction that I felt, and still feel, should have been adjudicated as justifiable homicide.

Because I was an outspoken prisoner activist and prison abolitionist, the administrative politics of the Prison Industrial Complex sought to silence my justice-based, morality- grounded outspokenness. I refused to shuffle my feet, scratch my head, prostrate in submission, or kowtow in hopelessness. As a result, the beast buried me for every single day of my 20-year sentence. Still, I rise…

Arisen and resurrected, forgiven and still dedicated to justice, peace and equality, I now speak out from 910 Ponce de Leon Avenue in Atlanta, the Open Door Community. Discharged from 20 years of imprisonment, at 8:00 a.m. on August 29, 2014, I boarded a bus in Albany, Georgia, with Atlanta as my destination. I was the last person to depart the bus upon our arrival at the Greyhound station. Ed (The Agitator) Loring, Murphy Davis, Mary Catherine Johnson and David Payne greatly surprised and pleased me with their reception at the bus station. Each of them held signs that said “Welcome Home Melvin,” “Melvin Jones: This Way to Free- dom,” “Open Door Welcomes Melvin” and “God Promises Liberty to Captives!” It was such a cheerful reception into my Open Door Community family.

Five months later, I have engaged in a wealth of experiences and hospitality endeavors with the Open Door. I am ever thankful for my decision to become a resident here.

My first protest with the community and a coalition of other radical groups was joining in a rally to support higher wages for fast-food restaurant workers. Our rallying cry was “What do we want? Fifteen dollars. When do we want it? Now!”

I have attended numerous other protests with the Open Door and our affiliates, but the most memorable one that I have participated in was in conjunction with Gen Y and Black Lives Matter following the outrageous murders of Black men and women like Mike Brown and Eric Garner by white police officers. The rally started at Underground Atlanta with speeches and calls for action. Then we marched in the middle of the street, holding up traffic all the way to the Fox Theater, several miles away. At the Fox, 200 of us lay down in the entranceway to bring our fury about the killings of innocent, unarmed Blacks to the attention of those attending the Amy Grant concert that night, and to the world at large! Fox News broadcast the protest on its evening show.

On a daily basis, either at 910 or on the streets of our neighborhood, I am graced with the privilege of showing hospitality to our friends who are homeless. Sometimes, family or loved ones call us asking that one of our homeless friends return their call, and I have walked to the library or the park and told the “grapevine” to get the word out to the person that e or she should come to 910 and promptly return the call.

On Tuesday and Wednesday mornings, I hum to myself as I make large urns of coffee for our friends outside who will bring us blessings by allowing us to serve them a hot meal. During Soup Kitchen, I often give out tags for the bags that our friends carry with them all day, so we can safely store the bags while they eat with us. The job gives me the opportunity to happily greet each person as she or he comes to our home. Hospitality and love beget hospitality and love.

The Open Door Community has enriched my life, enlivened my spirit, and emboldened my outcries. Injustice anywhere is a threat to justice everywhere.