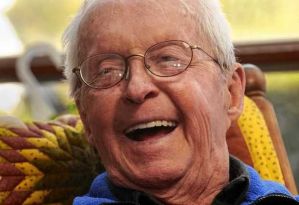 Jerry Berrigan passed away in his home at 95 on July 27, 2015. This article was published the week before on syracuse.com.

Jerry Berrigan can offer plenty of first-hand stories about giants.

Dorothy Day, one of the founders of the legendary Catholic Worker movement, was a friend. Day believed in “a revolution of the heart,” in the idea of hospitality and community for those who have the least.

When Day visited Jerry and his wife Carol in Syracuse, she spent a night at their home in the Valley.

Just over 50 years ago, Jerry traveled to Selma for the great march for voting rights, part of a contingent led by the Rev. Charles Brady of Syracuse. By sheer chance, they had an opportunity to meet Dr. Martin Luther King Jr.

That was three years before King was shot to death by an assassin. Berrigan said his overwhelming reaction – in a place where he witnessed the essence of raw hatred – was a sense of just how willing King was to put himself at ultimate risk, for a higher cause.

Decades earlier, as a young American soldier during World War II, Jerry had served Mass for Padre Pio in Sicily. Pio was revered among Catholics for bearing the stigmata, the wounds of Christ, and he’d later be canonized as a Catholic saint.

At 95, Jerry offers those tales in a voice as soft as a whisper, an English teacher pausing to contemplate the impact of each word, face illuminated by sunlight pouring into the house. Yet when asked about his larger approach to the world — how he found his way to the principles linked to the family name — he does not turn to moments found in history books.

He speaks instead of his father, asking for a glass of water.

Of his mother, telling a stranger to come in.

Of the moment when Jerry pushed a doorbell at a back door in East Syracuse, and the gift was the strength that sustains him today.

In those stories, amid times of global grief, he finds his hope.

Jerry and his brother Dan are the last surviving siblings of a Syracuse family renowned for activism. Dan and Phil, another of six brothers, became Catholic priests. In 1963, after witnessing King’s “I have a dream” speech, they wrote an open letter to The Post-Standard, challenging Syracuse to confront rigid borders of segregation.

“Those who help others to freedom,” Dan and Phil concluded, “have themselves taken the first step toward becoming free men.”

In that way, like Jerry, they lived out a family creed. A few years later, their opposition to the war in Vietnam – including the burning of federal records at a draft board in Maryland – led to arrests that gave Dan and Phil an international profile, and put them on the cover of Time Magazine.

Phil died in 2002. Dan, in fragile health, lives with other retired Jesuits at Fordham University.

Until their arthritis grew too severe for them to use their pens, he and Jerry would write to each other every week. Even now, when it is difficult for them to speak by telephone, Jerry’s grown children serve as intermediaries in sending messages back and forth.

In their 90s, the brothers share an appreciation that became their way of life:

They are among the last witnesses to the quiet mission of their parents, Tom and Frida Berrigan.

Jerry still follows the daily news of the world, the relentless accounts of war, terror and bloodshed. Asked if his belief in peace remains unshaken, he responded with a smile that seemed to rise from nowhere, and he answered by telling a few stories ….

The Berrigans, devout Catholics, often worship at St. Lucy’s Church, where Jerry said he defines his faith by the example of his mother:

During the Great Depression, when he was a child, the Berrigans lived near some railroad tracks in Galeville. Wandering strangers, hungry and jobless, often traveled past their house.

A man once came to the door, his body trembling as he asked for food. Frida didn’t know him, but she could tell he was ill. She feared for his well-being. She brought him in. He stayed for months, until he rebuilt his strength. To the Berrigan boys, Jerry said, he was simply Mr. Kirby.

Once he left, the Berrigans never heard from him again, but the point – for Tom and Frida’s six children – had been made.

“We are not to reject anyone,” Jerry said.

His father was a union organizer, an early activist in efforts to confront the ongoing racial divide in Syracuse. Jerry described his dad as “a peaceful man,” and one of the son’s most vivid memories is a day when Tom Berrigan came home so exhausted from his shift on a lighting crew that he stepped off a truck and collapsed onto the grass by their house.

Jerry asked what he could do to help. Tom said he’d like a glass of cold water. More than 80 years later, Jerry remembers what the most fundamental of gestures, at that moment, meant to his father:

For years, Jerry taught composition, literature and Shakespeare at Onondaga Community College. He and Carol were close to Rev. Ray McVey, a selfless Catholic priest who embodied the Dorothy Day philosophy. They joined McVey in visiting prisoners in jail. They helped him establish Unity Acres, a place of respite for homeless men.

Jerry was arrested and jailed so often for taking part in peaceful protests that he’s lost count, he said, of how many times he wore handcuffs.

From all of it, this treasury of stories, he said the greatest moment in his life occurred in that back yard in East Syracuse. For years, Jerry and Phil studied to join the Josephites, an order of Catholic priests dedicated to the African-American community. Eventually, Jerry decided to step away.

In 1954, he was invited to a gathering at the home of Peg Snyder, who was dean of women at Le Moyne College for seven years and would become a groundbreaking voice at the United Nations for improving the global status of women. Carol Rizzo, one of Peg’s friends, came over to share slides of a trip to Italy. When she heard someone at the back door, she answered it.

After 61 years, Carol and Jerry both remember that instant when they first stood face to face. They were married in autumn 1955. They’d raise four children. Jerry speaks of them as the core of all he did. As for Carol, he describes her with three words:

Through her, over the years, he could always find his way to his.

Long ago, he decided against becoming a priest for what he said was the most fundamental of reasons: “I wasn’t holy enough.”

Carol, upon hearing that, reacts with disbelief. What she sensed when she met him, she said, is what he still demonstrates each day:

Jerry Berrigan, she said, is “the holiest man I’ve ever known.”

One thought on “Jerry Berrigan dies at 95”