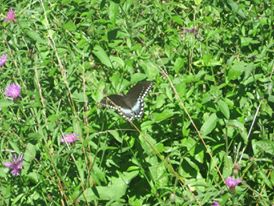 By Kim Redigan. First published in the Summer edition of On the Edge.

The assault on beauty in these times is brutal, unrelenting, traumatic as we fall ever more deeply into the nightmarish throes of what Naomi Klein calls “shock doctrine.” It doesn’t take a prophet to see that we are living through the end times of a ruthless economic system that is willing to soil its own nest and destroy its own children in order to feed an insatiable appetite for all that is good and God-given. A system, demonic by design, predicated on every kind of violence imaginable.

This is a profoundly biblical time. A time of empires collapsing and beastly boots on the back and portentous signs in the drone-filled skies. A time of white men’s desperate fingernail scratches along history’s walls. A time of young black men with hands raised toward the heavens while they are cut down like saplings. A time of revelation when the curtain is being yanked back and we are given the terrible grace of seeing what we’re really up against.

Violence does not have the last word.

In times such as these, I find myself turning to the Book of Revelation which reminds us to keep our eyes on the prize with the assurance that the “moral arc of the history does [indeed] bend toward justice” and that the deadly idols of our time will come crashing down by the weight of their own untruth and ferocity and that beauty will win in the end.

As we witness the breathtaking assault on the poor – locally and globally – orchestrated through structural adjustment plans that promote sweatshops and water shutoffs as the inevitable cost of doing business, scripture reminds us that “murderers, idol-worshipers, and all who love and practice deceit” Rev. 22:14) will not, ultimately, win.

The powers and principalities that have their manicured hands around the throats of the poor have been with us all along, although this particular generation seems especially vicious. Empires always fall hard, and this one is no different.

So, what are we to do in times like these? How do we “hold on,” as the song instructs in this cataclysmic moment? Where do we plant ourselves as the ground literally trembles beneath our feet, Mother Earth’s revenge against those who are despoiling her splendor and fracking with her in every way possible? How do we live in the midst of apocalypse when everything around us is falling apart?

We meet and march and organize, but there is much deeper work to do. These are times that call for mourning. Intense, garment-rending, heart-wailing, teeth-gnashing grief for the unspeakable pain being visited upon creation and the human family. Empires do not know how to hold the powerlessness or embrace the vulnerability inherent to grief and lamentation, so they pick up the gun (the ultimate instrument of weakness) and turn to violence.

Can one really look at our world without being driven to grief?

I will never forget visiting the small, sunlit Palestinian village of Biddu and witnessing the violence of row after row of ancient olive trees being cut down to their roots by aggressive chain saws wielded by Israel soldiers. I was literally knocked to my knees by this attack on beauty. It felt as if the assault on one olive tree were an assault on the entire world.

I had a similar experience last summer when it felt as if all the evil of the world were encapsulated in the single act of shutting off water on a mother and her children in Detroit. These revelatory moments mark our souls leave us doubled over in grief, and oblige us to slay the beast with the only weapon we have and the one it fears most – beauty.

In times such as these, we need a defiant insistence on beauty. An unyielding commitment to beauty in the face of the crass and tawdry commodification of . . . everything. From sex to seeds to schools, it’s all up for grabs. Beauty exposes the ugliness of this fear-based, death-dealing system and reveals its ultimate impotency.

Beauty is wild and untamed and always resists in unexpected ways. She refuses to comply with those who seek to make her their slave and she fights back in her own colorful and inexplicable way.

Beauty goes toe-to-toe with the powers of this world and laughs in their pinched, unhappy faces. Whether she takes the form of a brilliant orange poppy growing out of a wall in the West Bank or a plateful of tomatoes grown in a backyard in Detroit, she reminds us that to live in apocalyptic times is to live in an awful and graced moment, a moment when the old must pass away so that something new can taking root. “Behold, I make all things new.” (Rev. 21:5) For those who embrace her, this is a cause for celebration. For those invested in the present order, this is a grave threat.

When I think of olive trees being cut down and water being shut off, I again turn to Revelation where John speaks of angels and a river of life-giving water and a fruit-bearing tree that heals the nations and tears being wiped away. (Rev. 21:4; 22:1-2) Again, I remember that God is not mocked and that beauty will have the last word.

As the present system implodes around us, we are called to pick up the shards and use our pens, brushes, shovels, and hammers to create something new. We are called to plant, paint, dance, and delight in one another. Our battlefield is the garden, the kitchen, the front porch.

This is revolutionary work. This is the work of “creating something new in the shell of the old” during harsh and terrible times. In the midst of things collapsing around us, we must embrace beauty in order to resist all that militates against life and love, even while we grieve all that is under attack.

We defy the powers by raising a fistful of flowers and insisting on the primacy of beauty in the midst of apocalypse. As this age passes away, we plant seeds and sing songs and learn about a different kind of power, remembering always that God is not mocked and that beauty will have the last word.