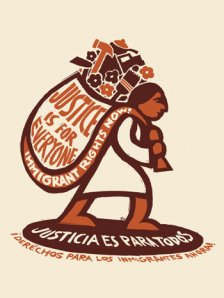 Amid our usual array of alternative-Christian-chic denim and earth-tone fleece, 4-year-old Angelita sparkles like a gem. Her hair is braided with colorful ribbons, and she’s wearing what I presume is her Christmas outfit: a bright sweater patterned with bold red flowers, a black velvet skirt, and shiny patent leather shoes.

A couple that is part of Circle of Mercy, my faith community, has agreed to care for Angelita and her older brothers if her parents are forcibly sent back to Guatemala. As we hear the details of the legal arrangement, Angelita sits in her father’s lap, snuggling against his chest. It’s a bittersweet gift, I think, as Angelita’s mother tearfully expresses her gratitude.

While most eyes were distracted elsewhere during the end-of-the-year holidays, the Obama administration announced a stepping-up of deportations of undocumented Central Americans in 2016. They wasted no time. Just hours past New Year’s Day, ICE (Immigration and Customs Enforcement) carried out pre-dawn raids in Georgia, Texas, and here in North Carolina. Altogether 121 immigrants—all women and children—were swept up and threatened with return to the perilously violent situations from which they have fled.

The sweeps in our state happened in the larger cities east of us, but fear and a sense of terror are running high in these mountains where I live. In the weeks since the raids, we’ve listened to stories like that of Angelita’s family and collaborated with local Latina/o communities and organizations to respond, working to get in place an emergency response network to provide transportation, secure legal support, and monitor traffic checkpoints where immigrants are often stopped and sometimes seized.

Circle of Mercy has joined the new sanctuary movement, a network of churches accompanying and harboring individuals and families threatened with deportation. It’s the resurrection of a resistance effort of the 1980s, when civil wars and political violence first drove many Central Americans north. I had the privilege then of interviewing several of the indicted pioneers of that movement, which those of us at Sojourners magazine called a “conspiracy of compassion.”

But the roots of offering sanctuary go far deeper, of course. Churches and university campuses gave shelter to young men refusing to fight in the Vietnam War, and enslaved persons running toward freedom found safe haven on the Underground Railroad. Churches opened their doors to Christian fugitives targeted by the Roman Empire, and long before that the ancient Hebrews declared temples and even entire cities places of refuge for persons accused of crimes. We claim a long tradition that can offer empowerment and courage for the moment we face—as we cling to an abiding hope that Angelita and her family will stay together.