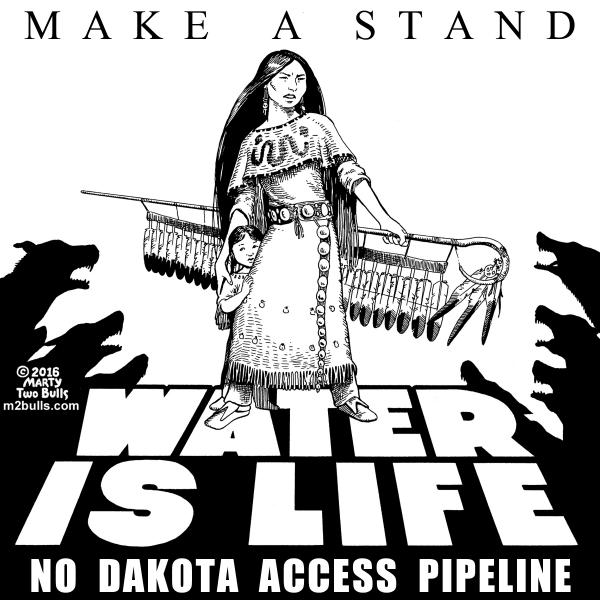 A message from the United Church of Christ:

To the broader church:

As Christians, we, the undersigned clergy, are conditioned by the gospel to stand on the side of the persecuted and the jailed. As such, we are compelled by our faith to stand with the water protectors of Standing Rock, who have pricked the conscience of a nation and the world. In opposing the Dakota Access Pipeline that would carry oil from North Dakota to Illinois, they have resolutely declared that they are not protestors but protectors and defenders acting out of a sacred obligation which affirms “water is life.”

In a pattern familiar to our faith, they have stood as peacemakers while government authorities and hate-filled hecklers deride them as criminals, rioters, and terrorists. With moral indignation, we have watched as children, women, and men have joined in prayer and song only to suffer at the hands of those wielding batons and pointing rifles.  With justified outrage, we have heard of how those arrested have been strip-searched and humiliated. With acute offence, we have witnessed an escalating, militarized response to acts of nonviolence.  We have witnessed multiple law enforcement agencies and the National Guard protecting the brazen and wanton acts of corporate powers determined to have their way. As these events unfold, we are aware of the context of race that defines this reality. In a letter to the Attorney General, Standing Rock Chairman Dave Archambault II writes, “This country has a long and sad history of using military force against indigenous people–including the Sioux Nation.”

For these reasons and more, we have joined together as clergy to issue two calls:

To our fellow clergy who are able to travel, we invite you to join with other clergy in Standing Rock on November 2nd and 3rd. As the Rev. John Floberg of the Episcopal Church writes in his appeal to clergy of all denominations, “Our vision is a day of protective witness in solidarity with the Standing Rock Sioux Nation and with the water protectors.” If you are unable to join with other clergy on these dates but would like to come later in the fall or winter when support will still be needed, please coordinate with the Rev. Brooks Berndt, the Environmental Justice Minister for the United Church of Christ.

To all people of faith and conscience, we invite you to also take a stand of solidarity through the following actions:

2 thoughts on “Standing Rock: A Clergy Call to Action”