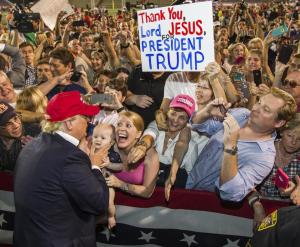 We shall not cease from exploration.
And at the end of all our exploring
Will be to arrive where we started
And know the place for the first time.
T.S. Eliot

Eighty-One Percent of white Evangelical Christians voted for Donald Trump earlier this month. This awfully revealing statistic, and my month-long visit to Southern California suburbia, has given me reason to reflect on the white Evangelical Christianity that “saved me” when I was ten, kept me pure in adolescence and then socialized me into early adulthood. It was a passionate faith that I eventually had to unfriend after going on a journey of questioning, praying and studying the deeper, more complex realities of life in both the world and the church.

There were all sorts of factors within Evangelicalism that eventually left me jaded, best summarized by the title of Mark Noll’s The Scandal of the Evangelical Mind (the first line of the book: “The scandal of the Evangelical mind is that there is not much of an Evangelical mind.”).   The error-free-and-self-evident Bible, hell as an afterlife destination for “unbelievers,” all the repressing and obsessing over sexuality (including the condemnation of gays and lesbians) and the all-powerful, all-male, everything-is-under-control God on the throne: these formed the four walls that eventually became a prison cell for me. About a decade ago, I made my Evangelexit.

I’m still a follower of Jesus though. I may have flown the coop, but I’m still part of the zoo. I’m a card-carrying member of the quirky coalition refusing to allow white Evangelicalism to have the final word. Sure enough, we are a hundred generations into the Christian experiment and the good news is that Christianity is a contested concept. Today, there are more than 22,000 Christian denominations offering differing versions of the Way. We can breathe easy: there is not one thing called Christianity. In fact, there are only christianities. Lower case. Plural. This has always been the case.

To take up the challenge of radical discipleship does not mean that we are on the same team as christian leaders and communities with beliefs, ideas and practices that we find embarrassing, repugnant or unfathomable. The Tradition is at its very best when the intramural competition is at its fiercest. There has always been a minority report committed to an inclusive, prophetic scripting of Jesus’ life—alternative to an Establishment narrative that prioritizes personal piety and a guarantee of how to stay out of hell when you die. As Dr. King preached, “Only a ‘dry as dust’ religion prompts a minister to extol the glories of Heaven while ignoring the social conditions that cause men an Earthly hell.”

This minority report has included christian communities, some well known and others unheard of, who consistently spoke truth to power, who swore off violence, who pledged solidarity with the marginalized and oppressed of society, who cherished voices of the indigenous, women, gays and lesbians and those of others races, ethnicities and creeds. This tradition includes imperfect communities through the ages with funny names like the desert mothers and fathers, Franciscans, Benedictines, Waldensians, Anabaptists, Quakers, American black slave religion, the Southern Christian Leadership Conference, Maryknoll sisters, Catholic Workers, the Plowshares Movement and Christian Peacemaker Teams.

In Donald Trump’s America, this minority report witness to the crucified God will be more important than ever. Our biggest mistake, though, would be to completely write off the tactics of our well-funded fundamentalist friends. The North American radical discipleship movement (all those struggling for church renewal and social change) has much to gain by nailing down the scouting report on two vintage Evangelical strengths: their contagious love for the Bible and a passion for changed lives. We radical disciples desperately need both right now.

The Bible, contrary to the Evangelical imagination, is not so much a cohesive, easy-to-read manual, but a collection of competing, critically-examined posts, each diverse text brimming with potential to rescript our lives in subversive ways. The New Testament illuminates a Jesus who doubled-down on an anti-imperial God full of justice and self-donating love, siding with the scapegoats of society over against wealthy and powerful religious and political elites. The original disciples worshipped and resisted in a very similar context to the one we find ourselves in today: communities of faith and conscience attempting to live discontinuous with the imperialist white supremacist capitalist patriarchal forces that hold the culture in captivity.

The Bible gives us the rich imagery and substance to counter what Thomas Merton diagnosed as “vague liberal slogans and pious programs gestated in the smoke of confabulation.” Unfortunately though, too many of our churches are throwing out the Bible with the backwater! Where white Evangelicals are prone to selectively “proof text” Bible verses to emphasize piety, we radical disciples can commit ourselves to reclaiming the entire canon with socio-historical, literary and narrative criticism that challenges us to push beyond symptoms (personal) to address systems (political). Climate justice, the full dignity of sexual minorities, the essentiality of black and brown life, epidemics of addiction, abuse and mental illness—these are not just the great moral issues of our time. They are thoroughly “biblical.” I can’t think of a more timely spiritual practice in this lead-up to Inauguration Day than a daily study schedule engaging scholarship from the list of Top 100 Books on the Bible and Social Justice.

Evangelicals, ultimately, get their name from their most prized spiritual practice: evangelism. These Jesus followers, in ways we often find obnoxious and awkward, are stalwart in their commitment to invite “nonbelievers” into the Kingdom. It is a strategic goal, infused into everything they do. Evangelicals have poured resources into studying how to pursue people with sincere questions and designing ministries that cater to the “felt needs” of friends and acquaintances. Of course, it helps to have the privilege, power and possessions that empire has afforded them, but Evangelicals value personal relationships, cultivating warmth, kindness and hospitality to be more effective in their mission to connect with all those who need “to get saved.” So should we.

This is what we are up against: while white Evangelicals extol the glories of Heaven, we refuse to ignore the social conditions that cause men and women an Earthly hell. While we commit to naming just how catastrophic things become, our greatest challenge, in a world of denial, is to reject despair by inviting a thirsty world into a clear-eyed hope. Make no mistake: we ought not water down our prophetic message. Our evangelism starts with an embodied apologetic, proving the righteousness of our cause, not through coercion, but by living out conversion in compelling communities. We attract, never promote. But in order for our movement to grow, we must invite. We can be more constructive about utilizing our style, grace, creativity and compassion to build bridges and organize a broader base of people of faith and conscience committed to transformative and adventurous experiments of solidarity, resistance and healing. This is precisely what people are yearning for everywhere, but struggling to find anywhere.

Of course, it’s a lot easier to pour our energy into demonizing the opposition. Instead, the radical discipleship movement can transform our animosity into opportunity, channeling our time, passion and resources into more constructive experimentation. In the next four years, a multitude of well-resourced, well-educated white Millennials who have grown up in Evangelical homes will inevitably become jaded with the political justifications and theological gymnastics of their parents’ generation. I could list many of them by name. These younger post-Evangelicals are starved for the complex honesty of an energizing spirituality based in dire reality. In this vital moment in history, while we distance ourselves from the core message of white Evangelicalism, we can subversively cherry-pick elements from their game plan that have proven effective. This, after all, is how the underdogs always win.

2 thoughts on “The Evangelexit Strategy”

A note from Wes: after 33 years of studying, teaching and writing on the Bible, I’ve felt a strong call to develop a 21st century, postpandemic means of inviting people into a deep engagement with the stories of our ancestors in faith. With no small irony, the idea developed out of my being forced to teach online all last school year, which led me to develop some basic skills in video production. I found that I could do it and enjoyed it very much! Here’s the link to the “trailer” video.