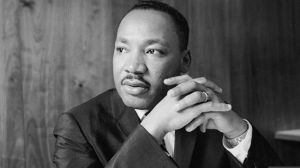 From Michael Eric Dyson in his book I May Not Get There With You: The True Martin Luther King Jr:

At the heart of the conservative appropriation of King’s vision is the argument that King was an advocate of a color-blind society. Hence, any policy or position that promotes color consciousness runs counter to King’s philosophy…”I have a dream,” King eloquently yearned, “my four little children will one day live in a nation where they will not be judged by the color of their skin but by the content of their character.” Of the hundreds of thousands of words that King spoke, few others have had more impact than these thirty-four, uttered when he was thirty-four years old, couched in his most famous oration. Tragically, King’s American dream has been seized and distorted by a group of conservative citizens whose forebears and ideology have trampled King’s legacy.

We have been ambushed by bizarre and sophisticated distortions of King’s true meaning. If we are to recover the authentic purposes of King’s address, we must dig beneath his words into our own social and moral habits. Only then can the animating spirit behind his words be truly restored. If we have been as deeply marked by his words as we claim, we need not fear that by putting away his speech we are putting away his ideals. After all, his ideals will have penetrated the very fabric of our personal and public practice. If King’s speech has failed to reshape our racial politics sufficiently, it might be a good idea to huddle and ask where we have gone wrong. In the long run, we will do more to preserve King’s moral aims by focusing on what he had in mind and how he sought to achieve his goals.

As things stand, “I Have a Dream” has been identified as King’s definitive statement on race. To that degree it has become an enemy to his moral complexity. It alienates the social vision King expressed in his last four years. The overvaluing and misreading of “I Have a Dream” has skillfully silenced a huge dimension of King’s prophetic ministry.

One explanation is that the American hunger for amnesia is too great. And where amnesia fails, nostalgia succeeds.