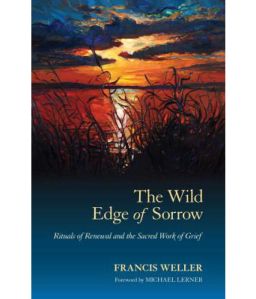 A Review By Tommy Airey

I’m someone who strictly reads books with a pen in hand. I do, after all, have standards. Francis Weller, though, is someone who writes books that force me to rearrange my standards for what gets underlined. His recent release The Wild Edge of Sorrow: Rituals of Renewal and the Sacred Work of Grief (2015) follows that trend. One-fourth of my copy is penned up. If I applied normal standards, though, it would easily be two-thirds. Paragraphs swim through waves of sentences pounding the reader with profundity. For the most part, I’m a typically unexpressive, work-it-out-in-my-head white heterosexual male. Weller, though, sparks something deeper in me. I found myself nodding, slapping inanimate objects, muttering out loud “Yep, holy shit.” An example from early in the book:

What I have come to see is that much of the grief we carry is not personal; it doesn’t arise from our histories or experiences. Rather, it circulates around us, coming to us from a wider expanse, arriving on unseen currents that touch our souls.

Weller is drawing on thirty years of experience in the therapy room, concisely summarizing Jung and Freud, relaying many stories that arise from clients. But he also peppers us with quotes from poets like Rilke and Rumi, Mary Oliver and David Whyte. The icing on the cake is the way he draws on indigenous wisdom and soul-tenders like Pema Chodron and John O’Donohue.

The core of The Wild Edge of Sorrow contains a summary of what he calls “the five gates of grief:”

I came to this book with high expectations, not only from the multiple recommendations that prodded my purchase, but the intense relevancy vice-gripping my own life journey. I read it on sabbatical in the wake of the one-year anniversary of my father’s death, but also fresh off saying goodbye to beloved Detroit, our home for the first two years of our ongoing suburban refugee experiment. But like Weller puts it, the grief just kept piling up, traffic stalling to a halt, spilling out of all five gates. And here’s the kicker: I’m not alone. Weller claims this is the case for everyone. Good luck with grief-proofing your life.

I found there was much that I loved and had lost: dad, father-in-law, old coaches, basketball itself, my teaching career, Detroit, painfully broken relationships (and others cherished that just dissipated with distance and/or time), folded church experiments, my grandparents whom I barely knew, thousands of students I got to know in the classroom who have vanished to college and adulthood, old pets and girlfriends–in that order (only half-joking) and even Evangelical Christianity. This, of course, is just a start, but it has all flown by, hardly time for goodbyes, my feelings French pressed down as Life poured over into new pastures with very little pastoral help.

The gate entering “the places that have not known love” was most fascinating for me. Weller calls these “neglected pieces of soul,” the parts of ourselves that we hold in contempt, that we’ve banished into detention centers on the outskirts of who we are. It’s impossible to grieve for something that we feel is “outside our circle of worth.” Again, this is nearly universal. Weller laments that “we live in a society drenched in shame.” Our feelings of worthlessness and self-doubt are legion, much of it due to what he calls “slow trauma,” not dramatic events that happen to us, but all the love and attention that has been withheld.

In a powerful side-note, Weller cautions readers to avoid the widespread blame flung at so many parents:

While many of us suffered mightily because of unconscious parenting, we must remember that our parents were participants in a society that failed to offer them what they needed in order to become solid individuals and good parents.

Human beings, for millennia before the advent of civilization, were nurtured and supported from birth by a village, not a nuclear family. This has been a disastrous shift—yet another thing to grieve.

The gate leading into “the sorrows of the world” contains within it, a powerful paradigm shift for our Western mind. He cites Jung, Dr. King, Einstein and others to animate yet another devastating loss of indigenous conceptuality. We do not have a soul within the body, but instead, we live within the soul of the world, “enveloped in a field of consciousness.” We are interconnected, interdependent, sharing a powerful mutuality. When forests are clear-cut in the Amazon and when water is shut-of to low-income residents in Detroit, we feel the pain at a subconscious level.

The violence, oppression and injustice wear us down, no matter how much we try to run from it or medicate it. We suffer greatly from both amnesia and anesthesia—a painful cycle of forgetting and numbing. Weller implores us to get out of our individual denial bubbles and embrace what psychotherapist Miriam Greenspan calls “intervulnerability,” an increased awareness of the suffering all around us, in both humans and more-than-humans, and to focus our attention and energy on healing the whole.

Francis Weller is a voice we radical Christian disciples were already in dire need of. Then along came Trump. This new season is going to be an Olympiad of practicing intervulnerability, unregulated grief getting fracked out of this gate leading to the sorrows of our world, soaking our souls with legalized eco-terrorism and scapegoating crusades. We’ll need to meditate on and memorize key parts of this sacred text so we can quote it to our comrades, in and out of the trenches.

Our grief wells up intergenerationally too. As it turns out, our ancestors had plenty of unwept sorrows that drove them into denial and copings. I think of my Grandma Billie who lost her mom when she was eight. She was whisked away to stay with an aunt for more than a year and when she returned, dad had already been remarried: to the teenaged nanny. Billie ended up marrying a man fifteen years older than her—a drinking, smoking, workaholic who campaigned for George Wallace. The patriarchy was thick. Billie died on her sixtieth birthday. I’m just getting to know her now. According to the indigenous wisdom extrapolated by Weller, her grief continues to haunt me—only I can do something about it.

The Wild Edge of Sorrow, I’m quite sure, is shelved under “self help” at most bookstores. This is unfortunate. This is “spirituality” in both the deepest and widest sense of the category. Weller calls us, page after page, towards Spirit with a capital “S,” wooing us with an exquisite roster of all stars from many traditions and disciplines. This dream team is fine-tuned. They have chemistry on the court. I’ve read many excellent books over the past few years. This one’s the best. And don’t forget to buy a new pen with it too. You’ll need it.

4 thoughts on “The Wild Edge of Sorrow”