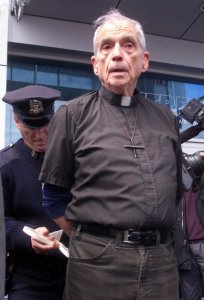 From the prophetic mouth of the late Dan Berrigan, on the 1st anniversary of 9/11 (An Interview with Amy Goodman on DemocracyNow, September 11, 2002):

An anniversary like this induces—seems to me, induces silence rather than a lot of words, but I’ll try. A few minutes after this horrid event a year ago, the phone rang. I was working at something. And a friend from North Carolina said, “Something terrible is happening in New York City.” And I said, “What?” and so on and so forth. And my first reaction was, I guess, right out of the gut rather than the heart, and I blurted into the phone, “So it’s come home at last.” Sympathy and tears came later, but that was the beginning. And I had a sense that that came from a very deep immersion in what I might call a hyphenated reality of America-in-the-world, hyphen in-the-world.

I was under American bombs in Hanoi in ’68. We spent almost every night, Howard Zinn and myself, in bomb shelters. It was quite an educated moment to cower under the bombs of your own country. There was a period of very intense reflection after that—that would be in February. Three months later, with my brother and seven others, I went to Catonsville, Maryland, and burned the draft files. I had seen what napalm did to children and the aged and anybody within the swath of fire in Hanoi. I had seen what happened to Jesuit priests who get in the way of America in Salvador. In ’84, I met with the Jesuits who were later murdered at the university there. I had tasted American courts and American prisons. I’m trying to explain my first reaction: So it’s come home at last.

Within a week or so, I opened the Hebrew Bible to the book called The Lamentations of Jeremiah. And I found there a very powerful antidote to the poison that was running deep in the veins of authority here. Evidently, this bystander of the destruction of the holy city was giving us permission to go through an enormously redemptive and healing labyrinth of emotions, emotions that one would think superficially the Bible would not allow for. But he allows the bystanders and the survivors to speak of enormous hatred of God, a spirit of revenge against the enemy, a guilt in view of one’s own crimes and inhumanity, a hatred of those who have wrought this upon us, etc., etc. These are all the tunnel, the very deep tunnel, of psychology and spirit that the Bible opens before us. I began to understand that unless we went through that, we would never come out to the light again, and that that would be true of myself, as well. I began to understand that the foreshortening of that lonely and difficult emotional trek was a clue to Mr. Bush and the war spirit, and that unless one were allowed the full gamut of human and inhuman emotions, one would come out armed and ready with another tat for tit.

One thought on “Dan Berrigan: ¡Presente!”