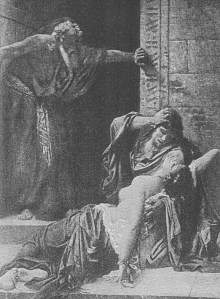 There have been two special occasions in my life when I have become agonizingly aware of the special fear women feel over the threat of sexual assault.

The first happened when Nancy and I were counting the days before our wedding in 1973. Every couple weeks she came in from where she went to school in New Jersey to meet me in a chaplain’s office in New York City. We were doing a series of premarital counseling sessions.

She was late that evening, and I was feeling a mixture of irritation and concern. When she finally arrived, her face—paler than ever—still bore the marks of terror. She had stopped along the highway to check what she thought might be a bad tire. And a stranger had assaulted her.

She was lucky to get away without physical harm. But the psychic wound was deep. It’s hard—maybe impossible—for us men to fully appreciate this kind of trauma unless it happens up close and personal, to someone you love as much as life itself.

To get inside such an experience, we men have to have our hearts directed in intimate ways.

My second such experience was more public than personal. In 1992 I was part of a group of Jews, Christians and Muslims visiting the war-torn Balkan region of southeast Europe, to the country formally known as Yugoslavia. War had previously broken out in the Slovenian and Croatian regions which were now declaring independence from Yugoslavia’s federated republic. Most of the shooting war now centered in Bosnia and Herzegovina, an ancient culture whose lands once formed the western boundary of the former Turkish Empire. Because of this, many Bosnians were Muslims. But many others were of Serbian ancestry, a culture dominated by one of the eastern Orthodox traditions of Christianity. Although their cultures had lived in relative harmony for many years, deep rivalries stretched back to the history of the Crusades a full millennium ago.

The Franciscan Abbott of Croatia had invited the Fellowship of Reconciliation here to bring a group to his cathedral church in Zagreb to lead an interfaith service dedicated to affirming that God was neither a sponsor of nor a partisan for any side in this war.

I was ill prepared for the testimonies of numerous Bosnian Muslim refugees and countless aid and human rights workers. Time after time we heard the confirmed stories of Serbian militias raping Bosnian women and then putting them on a bus for transport to Croatia, each with a hand-painted sign reading, “Here comes another busload of little Chetniks,” the colloquialism used to indicate Bosnian militias.

Rape has always been part of the culture of warfare—by every side and in the service to every cause. (And I don’t mean to imply that Serbs committed all the atrocities of that conflict.) Apparently, though, this was the first time in history when rape of women by men became a conscious and intentional battle tactic.

I came home from that trip very nearly stunned into speechlessness. Who can fathom such brutality?

This same question comes to mind after hearing the earlier story from the book of Judges. I suspect many of you are hearing it for the first time. The story’s terror is nearly pornographic in nature.

We could easily spend a week with this one chapter. Though it’s not easy to pick up in a first reading, the characters, plots and subplots, coded language and highly dramatized narratives are as elaborate as they are concise. You have to know some history and other biblical literature to catch all the nuances. The original author, the later editor, and the even-later compiler of this material all had interpretive points to make.

And that doesn’t even get us to the question of why this violent and obscene material is in our Holy Book in the first place. To that question I will simply say: The Bible may be the original “reality” show. The mess we now get on TV is there in this ancient literature. If you happen to think the Bible is loaded with uniformly nice, sweet, “godly” characters, you haven’t done much reading. Misogyny, among other morally-debased activities, is all over the place.

We’ll have to leave such dilemmas to a later time. Suffice it to say, I happen to think just such a body of literature is what helps us see and resist the violent and profligate culture in which we now live. Of course there are differences between now and then. Which is why this material requires some work if we are to comprehend and learn from it. But there are also profound points of convergence between this text and our context.

Oddly enough, the central character in this story is one that remains nameless and one who never speaks. Her identity is always subsumed in collective references that include the accompanying servant and two donkeys. She is a concubine, something like we would think of as a mistress; only she is not “kept” in luxury. Her social status is actually less than that of the servant. Her owner is a Levite, a member of the professional religious class in ancient Israel. And there is no scandalous inference to his ownership of her. Just as today, generally speaking, there is no special significance assigned the scandalous rate of domestic abuse against women in our supposedly “enlightened and advanced” culture.

Let me point out just a few of the points to consider.

The first significant clue comes in the very first line of the story, where it says, “In those days, there was no king in Israel.” Calling attention to this fact is not so much an argument for a return to monarchy, but simply an indication that the structures of public justice had collapsed. The text is implicitly tied to a related fact mentioned in the chapters surrounding this story, where this line is repeated: “every man did what was right in his own eyes.” This opening line is a clue about how we are to interpret what comes next.

The second line of the narrative mentions what for the original audience was a startling turn of events. It’s something we pass over without noticing. The story says the unnamed woman fled her master’s house. A revolt is underway, and it is centered around a nameless nobody.

Of course, the revolt is quickly quashed. Everyone in this Circle knows what it’s like to be involved in quashed revolts—revolts in our everyday lives against dehumanizing behavior in our neighborhoods and workplaces, in the formation of local economic policies, state and national funding priorities, political corruption creeping in, even within the institutions we love and support . . . sometimes even into the church itself. People who are still grasped by a different vision—of affordable health care, of educational institutions devoted to genuine learning rather than propaganda and cultural assimilation, of genuinely equal opportunities for both women and men—we get beat down and quashed so often that we begin to think we’re crazy.

One of the reasons worship is so central to our lives is because this is the place and time we get together to remind ourselves that we’re not crazy. That a different world is not only possible but is promised. Which is why one of the Bible’s most persistent themes is: don’t give up, stand firm, persevere, don’t be afraid. Part of our calling involves a kind of revolutionary patience (Dorothee Sölle).

I don’t need to repeat the callously brutal facts of the rest of the story: of whole communities committed to rape; of men protecting their own status and safety by sacrificing the lives of women. In her book, Texts of Terror, Phyllis Trible offers this commentary:

“Of all the characters in Scripture, she is the least. Appearing at the beginning and close of a story that rapes her, she is alone in a world of men. Neither the other characters nor the narrator recognizes her humanity. She is property, object, tool, and literary device. Without name, speech, or power, she has no friends to aid her in life or mourn her in death. Passing her back and forth among themselves, the men of Israel have obliterated her totally. Captured, betrayed, raped, tortured, murdered, dismembered and scattered—this woman is the most sinned against.” (pp. 80-81)

The story closes, with the woman’s dismemberment and the scattering of her body parts to the far reaches of the land, the text’s final words are instruction for the whole population to hear and heed: “Has such a thing ever happened since the day that the Israelites came up from the land of Egypt? Consider it, take counsel, and speak out.”

But as Trible reminds us, even the best English translations cannot do justice to the original Hebrew, where all of the verbal forms and the object in this statement are written in feminine gender. Literally, if awkwardly, translated it becomes “And all who saw her said, ‘SHE was not, and SHE was not seen such as this from the day that the people came up out of the land of Egypt.’” In other words, the unnamed woman, the one with no status and object of unspeakable terror, is at the center of this story demanding our attention.

The narrative closes with three imperatives: “Consider this, take counsel, and speak.” But again, the original is so much stronger: The first comment is not a suggestion; it is an imperative. And it’s not just “consider this” or “think about this.” It’s more like: “Direct your heart.” It is a NOW HEAR THIS! And not just in general, but “to her,” to this abused woman. God’s interest is tied up in, is synonymous with, the interests of this woman.

Then, “take counsel,” immerse yourself in this deforming tale and let it inform and reform you.

And finally, “speak.” Declare. Advocate. Demand a listening attention. Be a nuisance if you have to.

The silence must end, sisters and brothers—but here especially I am speaking to my brothers. To find the wherewithal to do this, our hearts must be directed to the stories of forgotten and unnamed sisters. They have names, and we must learn them. They have histories and we must tell them. In the end, we must nurture a vision where our security and theirs are bound up together.

Lord, hear our prayer. May it be so.

Ken Sehested is author and editor of “prayerandpolitiks.org,” an online journal at the intersection of spiritual formation and prophetic action.

One thought on “Sermon: She was not: The Bible’s most vividly brutal story, and why we must read and remember it”

Another Amazing Offering from Geez Magazine