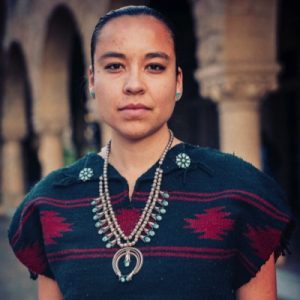 By Lyla June Johnston (right), a Diné singer, writer, and activist specializing in intergenerational and inter-ethnic healing, as well as Indigenous philosophy. This essay is [re]posted with permission from her Facebook page.

I spend a lot of time honoring and calling upon my Native American ancestors. I am keenly aware that my father’s people hold a venerable medicine as well. He has ancestry from the Great Sacred Motherland of Europe.

But one day, as I sat in the ceremonial house of my mother’s people, a wondrous revelation landed delicately inside of my soul. It sang within me a song I can still hear today. This song was woven from the voices of my European grandmothers and grandfathers. Their songs were made of love.

These grandmothers and grandfathers set the ancient medicine of Welsh blue stone upon my aching heart. Their chants danced like the flickering light of Tuscan cave-fires. Their joyous laughter echoed on and on like Baltic waves against Scandinavian shores. They blew worlds through my mind like windswept snow over Alpine mountain crests. They showed to me the vast and beautiful world of Indigenous Europe. This precious world can scarcely be found in any literature, but lives quietly within us like a dream we can’t quite remember.

As all this was happening, I peered into the flames of our Diné hoghan fireplace. These Ancient Europe voices whispered to my heart to help me understand. “See, our songs are not so different from your Diné songs,” they seemed to say with a smile.

In this moment, the moment I first acknowledged and connected with my beautiful European ancestors, I could do nothing but cry. It was one of those messy, snotty, shuddering cries, where my face flowed over with tears of joy and sorrow. It was the cry of a woman who met her grandmother for the first time. I always wondered where she was. What she looked like. What her voice sounded like. Who she was. And now, for the first time, I could feel her delicate hands run through my hair as she told me she loved me. I sobbed and I sobbed and I sobbed.

But then, as thousands of European ancestors swirled around me and reassured my fearful heart, I wished I had honored them sooner. I wished I hadn’t disowned them. I wished I knew how beautiful they were. I wished I could have seen through the thin wall of time that dominates our understanding of Europe. I wish I could have realized the days when Indigenous Europeans were deeply connected to the earth and to kinship. In my mind I told them I was so, so sorry for forsaking them. But, of course, they did not care. They only held me tighter and assured me they would be with me to the end.

The sweetness of this precious experience changed me forever. I have come to believe that if we do not wholly love our ancestors, then we do not truly know who they are. For instance, I get very offended when people call Native Americans “good-for-nothing drunks.” Because by saying this, people don’t take into account the centuries of attempted genocide, rape and drugging of Native American people. They don’t see the beauty of who we were before the onslaught. And now, I am offended when people call European descendants “privileged good-for-nothing pilgrims.” Because by saying this, people do not take into account the thousands of years that European peoples were raped, tortured and enslaved. They do not understand the beauty of who we were before the onslaught. They do not understand that even though we have free will and the ability to choose how we live our life, it is very hard to overcome inter-generational trauma. What happens in our formative years and what our parents teach us at that time can be very hard to reverse.

European women were burned alive, drowned alive, dismembered alive, beaten, raped and otherwise tortured as so-called, “witches.” It is obvious to me now that these women were not witches, but were the Medicine People of Old Europe. They were the women who understood the herbal medicines, the ones who prayed with stones, the ones who passed on sacred chants, the ones who whispered to me that night in the hoghan. This all-out warfare on Indigenous European women, not only harmed them, but had a profound effect on the men who loved them. Their husbands, sons and brothers. Nothing makes a man go mad like watching the women of his family get burned alive. If the men respond to this hatred with hatred, the hatred is passed on. And who can blame them? While peace and love is the correct response to hatred, it is not the easy response by any means.

The Indigenous Cultures of Europe also sustained forced assimilation by the Roman Empire and other hegemonic forces. In fact, it was only a few decades ago that any Welsh child caught speaking Welsh in school would have a block of wood tied to their neck. The words “WN” were there-inscribed, standing for “welsh not.” This kind of public humiliation will sound very familiar to any Native Americans reading this who attended U.S. Government boarding schools.

Moreover, our indigenous European ancestors faced horrific epidemics of biblical proportions. In the 1300s, two-thirds of Indigenous Europeans were wiped from the face of the earth. The Black Death, or Bubonic Plague, ravaged entire villages with massive lymph sores that filled with puss until they burst open. Sound familiar?

The parallels between the genocide of Indigenous Europeans and Native Americans are astounding. It boggles my mind that more people don’t see how we are the same people, who have undergone the same spiritual assault. The only difference between the Red Story and the White Story is we are in different stages of the process of spiritual warfare. Native Americans are only recently becoming something they are not. They are only recently starting to succumb to the temptations of drugs, alcohol, gambling, self-destruction and the destruction of others. Just as some Native American people have been contorted and twisted by so many centuries of abuse, so too were those survivors of the European genocide. Both are completely forgivable in my eyes.

Now I see I have a double-duty. I must not only honor and revitalize my Diné culture, but also that of my European ancestors. This ancient Indigenous European culture is just as beautiful as Native American culture and was just as tragically murdered and hidden from history books.

And so, some years later, armed with this new understanding, I traveled to Europe. I scaled a beautiful mountain in Switzerland to see if I might hear hints of ceremonial songs in the wind. I stepped upon the earth guided by those grandmother and grandfather whispers. I plucked a strand of hair from my scalp and placed the offering upon the earth, still wet from morning dew. I ambled through the forests enchanted by the new sights and smells. And I did see glimmers of visions of the villages of yesteryear. And they were full of Earth People living out harmonious community. And, they had beautiful music.

As the sun went down, I fell back on the grass and looked up to the sky. At the time, I was going through a very painful separation from a person I loved. To my surprise, it felt as if the earth was pulling all the sorrow I was carrying down into her core where she could transform it into beauty. The sky was speaking to me about how I didn’t need to worry, that I would be happy again one day. The earth and the sky healed me that day from the great weight I had carried for months. It was a special reunion with the mountains of my foremothers.

In 2009, archaeologists came across a female effigy believed to be the Goddess of the Earth buried inside of German soil. The radiocarbon dating tests came back. They indicate that this clay deity was molded by European hands 40,000 years ago. 40,00 years ago. This is the time she beckons us to. This is the world she hopes we will remember: where man and woman alike, held the soil in their hands and saw the value and sanctity of women and of the Mother Earth. This is the world that still flows through our veins, however deafened we have become to it. With prayer we can learn to hear it once again.

I compare this earth-based, Indigenous European culture to the witch-burning psychosis of the first and second millennia. I cannot help but ask myself, when and how did this egalitarian, earth-loving, woman-honoring culture, become the colonial, genocidal conquerors that washed upon American shores? Could it be that our beloved Indigenous European ancestors were raped and tortured for so many thousands of years that they forgot who they were? Could it be they lived in a pressure cooker of oppression for so long that conquer-or-be-conquered is all they knew? Yes, I believe so.

Our task is to shake the amnesia. To not be ashamed of our European-ness, but to reclaim our beautiful grandmothers, to reclaim our venerable grandfathers, to reclaim our lost languages, our lost ceremonies, our lost homelands and become one with the Great Sacred Motherland of Europe once again. The European diaspora is spread all throughout the world, searching the planet for something that lives is inside. I promise you will hear it when who climb the mountains of Switzerland! Of Scotland! Of Tuscany! Of Hungary! Of Portugal! Of the Great Sacred Motherland of Europe! Just because bad things happened upon her bosom does not mean she is bad.

Our task is to honor our ancestors, even those who caved beneath the weight of systematic destruction and became conquerors themselves. Our task is to remember that we are those beautiful Earth People. The ones whose love and prayers were so strong that they could carry 25-ton blue stone monoliths for miles and miles and build the sacred place of prayer known as Stonehenge. That is who we are. When we remember this, the healing of our lineages comes full circle. When we remember this, we will no longer need to borrow spiritual practices from other cultures (although that can be very helpful when there is nothing else to hold onto.) When we remember this, we will remember that the fates of all beings are intertwined with our own. When I remembered this, I found whole-ness in my self—no longer a half-breed, but a daughter of Two Great Lineages, Two Great Rivers that ran together to make one precious child.

This is the story of how I became whole. Some days, it feels like both fire and water live within me. They dance and swirl around one another. In the morning when I wake up, each bows to the other, honoring themselves as equals, as beautiful. When I go to sleep at night they wish each other good dreams. They teach me how it could have been when Columbus first stepped upon Taino shores: a meeting of two long lost brothers, embracing each other and celebrating their unique cultures. They teach me how things can be for our children in the future.

Because that’s what matters most, doesn’t it? Not how the story goes… but how it ends. We each hold a pen. Let us co-author a story of how humanity fell in love with itself and its Mother Earth once again.

**For more from Lyla June, listen to this podcast interview with Eric Garza.