Decades ago, Alice Walker suggested that the White House should be run by twelve grandmothers. I spent my Wednesday at the state capital bearing witness to the obvious brilliance of her proposal.

It was almost two years since my first visit to Lansing, days after the Flint water poisoning scandal broke out like an upper respiratory infection.  The brutal part: both viruses still linger.

Back then, business brought my friend Mike to Michigan. But his heart and his camera prodded him all the way to Capitol with me to brave a single-digit-wind-chilled protest during the Governor’s annual State of the State address.  A year later, the state’s Civil Rights Commission issued a scathing 135-page report naming “systemic racism” as a major factor in Flint’s water contamination. Redlining, white flight to the suburbs, intergenerational poverty and “implicit bias” were all chronicled as contributing to the unnatural disaster.  Fifty years after the Kerner Commission report, history came full circle.

A few months after my first visit, Republican Governor Rick Snyder and President Obama drank water from a tap for assurance purposes. Since then, scores of residents have died from bacterial pneumonia, breathing in the steam from their showers. In Detroit, too, the coverage of water shut-offs came and went. The situation has only gotten worse, tens of thousands of residents denied running water in their homes indefinitely.

This dire reality is what prompted me to join a team from the Detroit People’s Water Board coalition pleading with state representatives to support a hearing for bills that would protect seniors, children and the sick-and-injured from water shut-offs and that would reduce the draconian punishment for residents who turn their water back on after the city shuts it off (the current sentence is five years in prison–the same as multiple offenders of heroine possession).

The Capitol Building in Lansing sits four miles west on Michigan Avenue from the 15,000-seat Breslin Center where the #5 ranked Michigan State men’s basketball team suits up for home games.  I bought a ticket for nine bucks and tapped my white privilege to secure a tenth row seat among a sea of white Baby Boomer alumni clad in green. I just had to get a better angle on their star sophomore Miles Bridges. The one from Flint.

Tom Izzo, the hall-of-fame head coach of the Spartans, is currently trying to keep his job with the same playbook Gov. Snyder successfully used after Flint: deflection and resilience. In the aftermath of the Larry Nasser sexual abuse scandal, ESPN unleashed an investigative report more-than-hinting at sexual assault cover-ups in the football and basketball program: “a pattern of widespread denial, inaction and information suppression.” In her brilliant and courageous piece, MSU alum Jemele Hill put it this way:

Michigan State seems to have invested a considerable amount of time protecting its image and reputation while disregarding the welfare of young women at their most vulnerable and in desperate need of support.

Like Hill, I, too, love Izzo (although I don’t know him personally as she does). He seems to do just about everything right. He seems to care about his players and more than just about winning. And he seems to keep winning with players that stay for four years while playing defense and rebounding and diving on loose balls. And on top of all this, he seems to be one of those leaders that my old college basketball coach Bill Mulligan reverently called “no-bullshit guys.” If, like me, basketball is in your bones, Izzo seems to have been dreamed up by James Naismith himself. 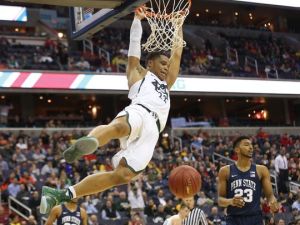 Bridges pulled down nine boards and dropped twenty-three points on Penn State, including a two-hand tomahawk dunk in traffic that sparked the Spartan student section (“The Izzone”) into a frenzy. It was another double-digit come-from-behind win.  Deflection and resilience.

It didn’t sound like the Izzo that I seemed to love.  He was scripted and pandering.  Steele followed up by asking when he might provide a full account:

I think there will be a time when I’ll be able to speak. But it isn’t right now.

What did you know? When did you know it? Appropriate questions for men in charge. Everyone deserves to know the answer to these (and more).  Immediately.

I would say to (parents) that if you don’t feel comfortable with your children at Michigan State, take them somewhere else because we’ve got a long list of people that want to go to Michigan State and there are some wonderful people left.

As it turns out, Michigan is the epicenter of “Adventures in Completely Oblivious White Dudes.”

This Sunday, over a billion Christians worldwide will go to church and read the old passage from the prophet Isaiah that depicts the everlasting Creator sitting on a satellite throne high above the earth peering down upon “grasshoppers” of humans. This is the One who “brings princes to naught, and makes the rulers of the earth as nothing” and who “gives power to the faint, and strengthens the powerless.” This is a God who defies the addiction to power, the deflection and resilience of mostly white male leaders.

But here’s the rub: this prophetic God calls on the young and the restless for justice to wait upon the Lord.  To wait?  Awkwardly, God sounds an awful lot like Governor Snyder and Coach Izzo and Ambassador Secchia.  Do we worship the God of deflection and resilience?  No way.  We are called to contest biblical testimony when it does not follow the pattern that Dr. King called “the fierce urgency of now.”  Jesus insisted, “Time’s up! God’s reign of justice is on the verge!” A theological spin move is desperately needed.

The secret of the Scripture is that there is an eternal contest over who God is and what it means to follow Her.  The God made known to Jesus was determined by a compassion (Greek splagchna) that ancient Jews described as feeling the pain of others so intensely that one experiences “a burning in their bowels.” This empathy on steroids demands action.  Jesus names the unclean spirit and casts it out. Immediately. Even on the holy Sabbath day.

The grandmothers are ready to lead.  Now.  We don’t have time to wait for additional comments.  Before we blink, it will be too late.

One thought on “No Additional Comments”