The files of Civil Rights elder Ruby Sales have opened and gifted us with stories of freedom fighters of yesteryear.  May their stories never be forgotten. This is a sample, with descriptions from Ruby:

The indomitable and courageous sister SNCC leader Gloria Richardson (right) of the Cambridge, MD movement during the Southern Freedom Movement standing up in all of her Black women soul force power to White police. As the debate rages around the nation about good of bad policing, this picture reminds us of their systemic roles of using violence and terrorism to maintain the social order of White supremacy. Lest we forget this picture reminds us of the courage and front line struggle of our sisters.

Gloria Richardson is still alive and in her 90’s.

This is Mildred Thompson (left) internationally known visual artist who is best known for her abstract art and sculpture. I met Mildred through Audre Lorde when I was a graduate student at Princeton. Mildred and I developed a deep bond that lasted until she died of cancer.

Mildred was a student of Lois Mailou Jones and James Porter who were both artists and professors at Howard . Her work can be found in major museums in America, Germany and France. Mildred’s partner, Donna Jackson resides in Atlanta. 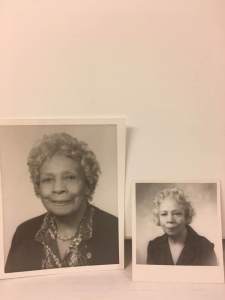 My dearest mentor and friend Dr Dorothy Porter Wesley (right) known as the Dean of African American letters. Prime mover and builder of the Moorland Spingarn Collection and then Library at Howard University. Bibliographer and African American scholar who helped Kwame Nkrumah build his library. Every scholar of African American Studies of a certain generation came under her tutelage. His first husband was the famed artist and scholar, James Porter, and her second husband whom she married in her early eighties was the renowned historian Charles Wesley who had also been President of Wilberforce and West Virginia State.

As much as I loved her she did not tolerate fools gladly. She either liked you or was indifferent. Thank God she liked me because I learned so much from her. She was a staunch supporter when I first came to DC in the mid 80’d to begin a life.

One thought on “Ancestors Rise Up!”