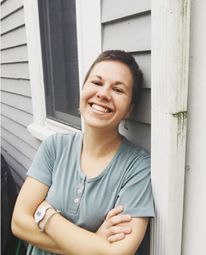 Last year for my Sociology senior thesis, I chose to research the interactions between two environmental justice (EJ) organizations in a majority-Black city with a rich and complicated history of EJ work. I had made connections with folks in the EJ movement when I had lived there for a few weeks the previous summer, and I figured that studying these two organizations would be a perfect way to both learn more and get involved in work that I was drawn to. I did some background research, and then traveled to the city for a week to do interviews with members of both organizations. After documenting my findings, I submitted the paper and got a near-perfect grade on the first draft. I was proud of my work, and I was rewarded and praised for it.

A few weeks later, another Sociology professor proposed that we submit my paper for publication and I enthusiastically agreed. But first, I thought, I wanted to check with the two organizations. Given the city they are based in and the nature of their work, it would have been difficult to ensure that their identities remained completely anonymous if I went forward with publication. And given that my research had exposed some conflict between them, I wasn’t sure they’d want their identities going public. So I pulled up separate emails to the directors of each organization, attached the final draft, and clicked send.

Within a couple hours, I had received angry replies from both of them that shook me to my core. They were both upset by the content of the paper, and deeply concerned when they realized that the other director was also given access to it. One in particular, who I had come to regard with admiration and respect, felt especially betrayed and misled.

I was completely shocked, disturbed, and deeply ashamed. That night I experienced somewhat of an existential crisis, and couldn’t stop thinking about the project and where I had gone wrong.

On one hand, according to conventional practices of sociological research methods, I had done very little wrong. Throughout the thesis process, I followed all of the standard protocols that I had learned in my previous years of Soc. classes: I had all of the participants fill out consent forms; I gave them a general overview of what I was studying; I transcribed all interviews to a T; and I followed models of data analysis that were academically and sociology sound.

Looking back on the process, I began to see that the integrity of my project was threatened by the absence of some pretty critical questions. For example: What does it mean to be a young white student from a majority-white liberal arts college studying two Black-led organizations in a majority-Black city? What consequences might my identity have on the accuracy and validity of my paper? What consequences might my identity have on the groups I was studying? Who am I accountable to in doing this research? Who might stand to gain from it — and who to lose? Whose voice(s) does this research amplify? Whose does it diminish? Is my research informed by lived experience and/or established relationships with those I am studying? Even if this is an important story, is it truly my story to tell?

Asking these questions may have helped me predict the unforeseen consequences of my project, and could have prevented me from causing so much harm to the groups I worked with. Considering these questions may also have caused me to redirect my research to a topic that was more relevant to my own identity and lived experience (for example, a thesis examining white privilege/white supremacy on the Hamilton Campus, or exploring how white students came to conceptualize their own whiteness). I hold myself responsible for not asking myself these questions during the time of my research, and I also recognize that no one in my department asked me these questions either. I see this as representative of my own weaknesses and blind spots, as well as those of many social science programs in general.

In the days and weeks that followed, it became clear to me that I had placed myself in a story that has played out time and time again. I joined a long, long, long legacy of white people (or, more generally, people from privileged groups) trying to tell stories that are not our own and doing a pretty terrible job at it. In both academia and everyday life, white people are so accustomed to telling other people’s stories that we may not realize how much unintentional harm this causes — both to others and to ourselves.

Because here’s the thing: No one actually needs us to tell their stories for them.

People of Color have been telling their own stories for years. When we, as white people, stop trying to tell other people’s stories for them, we invite more space in our lives to actually listen.

And here’s the other thing: when we, as white people, allow ourselves to listen to other people’s stories, we also create space to more fully examine our own.

Some of our stories, as it turns out, are hard to face. I know that for myself, thinking of my own relationship to whiteness often produces an immediate reaction of confusion, guilt, and shame. It can be — and perhaps should be — deeply uncomfortable to sit with many of the stories that we have inherited and continue to manifest in our lives.

Sharing this story has been difficult for me. It’s forced me to hold space for some seriously difficult questions as I’ve acknowledged both my own mistakes and the shortcomings of my chosen academic discipline. It’s reminded me that no matter how many anti-racism workshops I attend or organize, I am still going to really, really mess up.

This experience has helped me better understand the dangerous side effects of white people identifying ourselves as “allies.” When we label ourselves as such, even unconsciously, we can trick ourselves into thinking we won’t make mistakes (– oh, no, I’m not like those other racist white people. I’m an ally!) And when we do mess up, we can be even more reticent to talk about the experience because we’re so worried about what other people will think. What the “ally” label can obscure is that we, as white people, have made countless mistakes — and we will necessarily make countless more.

Because, by the very nature of our Whiteness, we will mess up in the work for racial justice. Yes, even if we proudly consider ourselves well-intentioned and/or well-educated and/or “woke,” the messing up part is unavoidable. But what’s important is that we are open to listening, acknowledging our mistakes, and talking to others without getting paralyzed by guilt or fear.

I have come to understand that talking about and acknowledging the experience of Whiteness — in all its violence, confusion, and pain — is a crucial first step for all white people who wish to move towards collective liberation. Our stories are the ones that we need to reflect on and (eventually) tell. A recent teacher of mine, Reverend angel Kyodo williams, says it well: “We’re not talking enough about the fear that white folks hold as a result of race… I’m talking about fear of one’s own self, because you don’t know how to have the conversation, because you feel shame about where you’re located in that conversation, about how to locate yourself” (excerpt from Radical Dharma, p. 51). Learning to honestly locate ourselves in conversations on race can help us better discern which stories are ours to tell, and help us more truthfully and courageously share our experiences with others.

On the night that I received those angry emails from the directors, I wrote down some of the questions that were sitting heavy in my heart, and, in closing, I’d like to share some of them with you here. I still don’t have the answers, and I certainly have a long way to go in my own (lifelong) process, but I believe that it’s both necessary and urgent to keep asking + reflecting + examining. I invite you into these questions with me, and also invite you to reflect on the questions, growing edges, fears, guilt, shame and pain that you hold in your heart. Let’s keep sharing our own stories and sitting with each other in our most honest, vulnerable, and powerful complexities.

6/23/17 – 12:06am
What do I do when I have hurt others unintentionally? How do I move forward when I’m not even sure what I’ve done? What purpose would guilt serve me? Shame? Anger? Embarrassment? How do I live in this complexity? Why did I do what I did? Who let me? How did I let myself? How do I forgive myself even when others can’t or won’t? How do I both forgive myself and hold myself accountable? Who am I accountable to? What does accountability even mean? Can I find a way to let this experience open me rather than close me? What would that look like? What would that feel like? Can I find a way to absorb this experience without losing my shape? How do I stay in this even when it would be so much easier to run away? Can I find a way to stay present? How do you incorporate lessons from the past and visions for the future into the present? What would it mean to “fix” this mistake? Can I? How do I gain trust in the future? How do I practice honesty? How do I sincerely express my deepest apologies? How do I love myself even after I’ve made a mistake? How do I stay grounded in community?

I would like to express my gratitude to the folks involved in my thesis research who shared their critique and frustration with me, and used their time, energy, and resources to help me better understand my own story. I acknowledge and am grateful for the deep cultural roots of Native American and Indigenous storytelling that I have benefitted from, and which inform my perspective on storytelling today. And I extend thanks to other white folks who have publicly talked about their own mistakes and helped me find the courageous space to share my own.

Finally, since completing my thesis, I have also been inspired by the concept of Community-Based Participatory Action Research, which according to The Advancement Project aims to be:

• Community-based: Grounded in the needs, issues, concerns and strategies of communities and the community-based organizations that serve them
• Participatory: Directly engaging communities and community knowledge in the research process and its outcomes
• Action-based and oriented: Supporting and/or enhancing the strategic action that leads to community transformation and social change\

This framework holds researchers accountable, and it allows for communities to truly tell their own stories with and through the research. I’ve found that this framework can also be applied outside of social science settings to help us evaluate other forms of informal research, story-telling, and media. I am grateful for the CBPAR model and all of those who have contributed to its development and implementation.

2 thoughts on “Telling my own story”