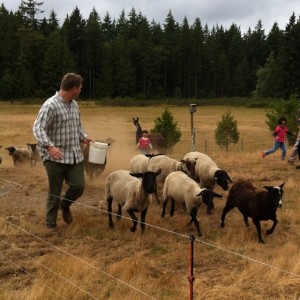 Sheep are not sexy.

Many biblical commentators struggle with language for this most archetypal figure, oftentimes casting them in unfortunate ways.  In a brief review of the 9 commentaries on the Gospel of John, which contains the reading this week, I counted no less than 6 which noted that sheep were “stupid,” “dumb,” or “dirty.”  (And, equally surprising, all noted how the role of Shepherd in the ancient world was one of ill repute.)  Perhaps that is correct, but if sheep are dumb it is in the same ways as you and I.  Namely: they seek out their own self-preservation, reacting to circumstances and perceived threats, often making rash decision based on incomplete knowledge.  Sheep lack depth perception, meaning they see shadows and pools of water as mysterious threats to be avoided.  (I don’t know about you, but I often lack vision too.)

I’ve spent a bit of time with sheep, as a one-time shepherd-in-training, when the environmental non-profit I helped to manage inherited an old estate with a half dozen sheep and a llama.  Over the years of living there we added several dozen to its ranks, moved several thousand bales of hay, bottle-fed rejected lambs on cold spring mornings, and, most transforming of all – loaded and drove many of these creatures (that we loved, no doubt) to the butcher, to their deaths.

It is this dance of life and death, and of the giving of life for another, that John’s Jesus is concerned with in this week’s Gospel reading.  And it’s no surprise that the image of Shepherd and sheep lies at the heart of it.

The Shepherd / sheep relationship is common across the Hebrew Bible and New Testament, ranging from the sentimental verses of our Sunday school years, (“The Lord is my shepherd, I shall not want” Ps 23; or “We are his people, and the sheep of his pasture” Ps 100), to the savage judgments of the Hebrew prophets, conveniently left out of the lectionary (“Woe to the Shepherds who destroy and scatter the sheep of my pasture! Says the LORD” Jer 23).  The Shepherd is an image used of God, but also applied at various points to appointed human agents, such as Joshua: “…appoint someone over the congregation… so [they are] not like sheep without a shepherd. So the LORD said to Moses, ‘take Joshua…’” Numbers 27:17-18

Jesus ministry includes an ongoing confrontation with the appointed Shepherds and God’s prophetic judgment on their willingness to sacrifice these beloved for the sake of profit.  Indeed, John 10 is a continued discourse Jesus had directs at the Pharisees – one of the “thieves and bandits” or “hired hands” of this story.  John describes this confrontation in characteristic parabolic richness and the paradox of Gospel reversal.

We begin John 10 with a shepherd who “goes in” by the gate – leading his sheep who follow his voice.  Yet just as the gatekeeper opens the gate, the verbs reverse and the Shepherd “leads them out.”  Many interpreters struggle to make sense of this strange pen and the peculiarity of the gatekeeper.  Most sheep pens in the ancient world were simple and hastily assembled rock enclosures (if ancient shepherds are anything like modern ones, they’d spend no more time, energy, or money for building fences/pens than is absolutely necessary!)  Thus, sheep might be safely corralled at night with the Shepherd laying down in the opening forming a gate.  But of course, these make-shift pens in the wilderness wouldn’t have an appointed gatekeeper to let them in or out.  There was one place that a gatekeeper would be appointed and this is a dark and dreadful place I have led many sheep to – which is the house of slaughter.

Of course, in ancient Israel the slaughterhouse was also the house of prayer – as sheep are a primary source of sacrificial flesh and blood, offered to God.   It would seem Jesus, in recounting this tale of sheep, is leading his listeners on a familiar journey to the heart of his conflict – in the Temple, where the sheep are regulary led for ritual slaughter.  But here, in metaphorical reversal, just when the gatekeeper opens the gate for the sheep to “go in,” the Good Shepherd “leads them out.”  (10:3).

You see, we may know the punchline – “I am the Good Shepherd.”  But perhaps our flannel-graph Jesus carrying fuzzy lambs on his shoulders and our recitations of Psalm 23 “I will fear no evil” has led us to overlook the heart of the matter.  For in John’s Gospel this same one who in Chapter 10 claims to be the Good Shepherd, was first introduced by John the Baptist back in chapter 1 with the stunning words, “behold the lamb of God who takes away the sin of the world.”

Thus, this Eastertide, we pause to remember the Good Shepherd who become the sheep, and whose faithfulness led to a Roman Cross – a horrible image of death which the whole of John’s Gospel anticipates.  Adding yet another layer of symbolic interest, Jesus – the lamb of God, the Good Shepherd – then says, “I AM the Gate.”

“I am the gate; whoever enters through me will be saved. They will come in and go out, and find pasture…” (John 10: 9).  No longer is the “gate” opened by an unknown gatekeeper towards face sacrifice in the Temple (for, as Jesus says, “all who have come before me are thieves and robbers”).  Unlike in the Synoptics, John’s Gospel begins with the Temple cleansing, marking this as the central conflict in his life and ministry.  Rather, now the Good Shepherd who has laid down his life for the sheep, rises to lead them out to find “good pasture” and his disciples towards “life and life abundantly” (10:10).

This puts all of the thieves, robbers, and hired hands on notice – that all those who align their lives with systems of Empire that sacrifice human life and livelihood for the sake of some ‘higher’ aim, are on the way that leads to death.

“The thief comes only to steal and kill and destroy; I have come that they may have life and have it to the full.” (John 10:10)

Here we confront one of the most perplexing paradoxes in the way of discipleship.  For in finding the way that leads to life, Jesus followers must face death head on.  As Bonhoeffer wrote, “When Christ calls a man (sic), He bids him come and die.”  This is the meaning of our Baptism – having died with Christ we might rise with Christ. To mix the language of John’s Gospel with that of St. Paul, we might say that the Good Shepherd became the innocent lamb, so that his sheep might offer themselves as “living sacrifices.” (Rom 12:1)  Doing so means we first confront the violent systems of sacrifice that sustain ‘business as usual’ in our 21st Century global Empire.  What forms of sacrifice are we being asked to make in order for the world to keep plunging along?  As climate chaos threatens us from all sides, who or what are we supposed to sacrifice to preserve our “lifestyle” – or might we hear the Good Shepherd and the invitation to another way?

Here in British Columbia, we are in the midst of a public battle over the expansion of the Kinder Morgan pipeline, with the federal government claiming this project is “in the public interest” (even if it sacrifices Canada’s commitment to the TRC recommendations, UNDrip, and the Paris Climate Accord).  Some are predicting that this conflict will become our Standing Rock.  But how might the Church hear the voice of the Good Shepherd, calling forth another way?  Will we put our bodies in the way of this brazen profit-making menace, standing with indigenous leaders who seek our solidarity?

On a smaller scale, I think of friends living here in Victoria who labour under thousands of dollars of student debt – their freedom sacrificed to secure a job which, 5 years after graduation, still doesn’t exist.  Or of others who have taken out 35-year mortgages – decades of paycheques already sacrificed to the privilege of residing in this “livable” city.  Meanwhile, the poor are always with us and the retired rich contemplate the fancy loopholes in the newest tax code…  It is to all of these who labour and are heavy-laden that the voice of the Good Shepherd calls – to close the gate on those death-dealing ways and to lead us out into a good and broad pasture, to life abundant.

I am no longer a shepherd of sheep.  Last year I traded my time on the farm for a more urban life with my family.  But as I begin a formal discernment about a call to ministry I find myself contemplating the Shepherd and his sheep.  For it is the same divine mystery that undergirds all of our creaturely existence – our lives are held by a grace not our own.  May we see and hear and know this and lay our lives down in the places we live, for the sake of all God’s sheep.

Matthew W. Humphrey lives, works, plays and prays on Songhees and Esquimalt territories, in the Cecilia Creek watershed, in Victoria, BC.  He is an educator and writer, working part-time for A Rocha Canada, a Christian conservation organization, and entering discernment for the priesthood with the Anglican Church of Canada.  Along with his spouse, Roxy, and three children, he hopes to take care of sheep again one day.

Wild Lectionary, a weekly reflection on land, creation and environmental justice themes in the texts of the revised common lectionary, is curated by Laurel Dykstra, gathering priest of Salal + Cedar, Coast Salish Territories.