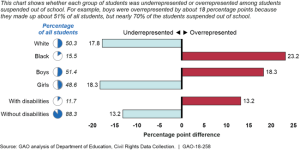 A new Government Accountability Office (GAO) report released last month, “K-12 Education: Discipline Disparities for Black Students, Boys, and Students with Disabilities,” reminds us once again that suspensions and expulsions continue at high rates and offer grave risks to students. The report by this federal monitoring agency reviews data from the Education Department’s Civil Rights Data Collection on school discipline trends across the country, provides a more in-depth look at discipline approaches and challenges faced in five states, and reviews past efforts by the Departments of Education and Justice to identify and address disparities and discrimination.

The GAO reminds us all of the profound ways school discipline affects students and can impair both their childhood and adulthood. For example, “research has shown that students who are suspended from school lose important instructional time, are less likely to graduate on time, are more likely to repeat a grade, drop out of school, and become involved in the juvenile justice system.” It also notes children experiencing school discipline often have behavioral issues affected by challenges outside the classroom, which are often more acute for poor children – especially children of color, who are more likely to be poor.

The report makes a strong case that there is still much work to be done and we must insist that this administration keep moving forward with solutions – building on what we know is working. We must resist current attempts to move us backwards and instead protect students from discriminatory practices. There are good superintendent-led examples out there to build on.

The GAO’s analysis examines six categories of discipline: out-of-school suspensions, in-school suspensions, referrals to law enforcement, expulsions, corporal punishment, and school-related arrests. It examines the data by race/ethnicity, sex, disability, and poverty level, and included studies of illustrative school districts in California, Georgia, Massachusetts, North Dakota, and Texas. Overall, the GAO found that Black students, boys, and students with disabilities were all disproportionately disciplined in the 2013-2014 school year (the latest available data) and that disproportionality is widespread and persistent despite the level of school poverty, type of disciplinary action, or type of public school attended (e.g., traditional, magnet, charter, alternative, or special education).

A closer look at some of the sobering findings:

School districts included trauma, mental health issues, social media (including bullying and other conflicts), immigration status, gang involvement, drug use by students or parents, lack of parental guidance and support, and situational barriers like transportation, jobs, and responsibilities at home among the many challenges that affect student behavior or attendance and can lead to discipline issues. There is a clear recognition in finding after finding in the report that more attention and resources are needed to help schools reduce disparities in discipline, not less. That overall finding is critically important now as Secretary of Education Betsy DeVos seems intent on the Department doing less rather than more to protect children from discrimination in suspensions and expulsions and other areas and reversing what progress has been made.

In 2014 the Department of Education and Department of Justice jointly released an extremely helpful school discipline guidance package to address these kinds of inequities in school discipline and reinforce the meaning of the non-discrimination requirements under Title VI of the Civil Rights Act. Yet the Education Department under Secretary DeVos now threatens to withdraw that guidance. The Children’s Defense Fund strongly supports the 2014 guidance package and the GAO report’s findings help reconfirm why it must remain in place for our nation’s children.

The guidance reaffirms the obligation school districts and those directly serving students have to ensure discrimination does not interfere with a student’s right to learn and succeed. It makes clear to all superintendents and other administrators, teachers, aides, parents, and students that students have legal rights to be free of discipline policies that push students out of school and can promote serious inequities in their educational opportunities. The law in this area is clear and has been for more than 50 years; the guidance brings legal protections together with practical steps districts can put in place through their school discipline policies and practices to comply with these nondiscrimination requirements. It has helped communities recognize and praise good policies and challenge the bad. Positive discipline practices are key to ensuring all children are treated fairly and all students can feel respected and supported in safe schools where they have equal educational opportunities.

The Children’s Defense Fund has been highlighting the disparate impact of school discipline policies on children of color and poor children since the publication of our 1975 report, School Suspensions: Are They Helping Children? Too much of what we learned then remains true today. It is critically important that the 2014 Title VI Guidance be maintained and that it not be made easier for schools to push children of color, boys, and children with disabilities out of school with impunity in a disgraceful race to the bottom. We must not in any way weaken our efforts to move forward to create a level education playing field for all children.