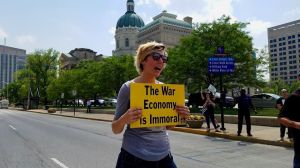 This week I was arrested. I was in jail for over 14 hours.

We sat or huddled in the women’s cell atop either hard cement benches or hard metal bunks (with no mattresses) covered by dried and crusted bodily fluids and years of dirt. A guard saw our sunburns and assumed we had contracted a rash from being in the cells. Without windows or clocks we were deprived of our sense of time. The fluorescent lights lit everything into a brightly illuminated nowhere. It took over 9 hours until we had access to our phone call. From the architecture, to the way guards ignored or yelled at us, everything was designed in a way to strip us of our sense of self and power. At one point, I overheard a guard saying “A beating would not harm that one.” It was a very long 14 hours in jail.

Why did I do this? Why would I go through such an ordeal, stripped of my freedom and dignity?

Because I am a Christian.

I follow a brown-skinned Palestinian Jew named Jesus. The Jesus who preached “blessed are the poor” and who was poor himself. The Jesus who told the parable about the Good Samaritan, defying the racism of the time. The Jesus who pointed people to flowers and birds to learn about God’s abundant economy of grace. The Jesus who died on a cross executed by a conspiracy between the religious elite and the mightiest military power of the ancient world.

The Jesus who risked arrest for his witness.

I am trying to follow Jesus in naming the evils of poverty, racism, environmental degradation, and the military industrial complex. The same evils that Rev. Dr. Martin Luther King Jr. pointed out in the original Poor Peoples Campaign right before he was killed. Now, 50 years later, those evils have increased as the Audit “The Souls of Poor Folk” documents.

Did you know that to afford a two-bedroom apartment at minimum wage you need to work 84 hours a week? How we can call ourselves Christians and put the Ten Commandments up in front of court houses while so blatantly disregarding the fourth commandment of Sabbath Rest?

As I followed Jesus by risking arrest, I met him in jail.

I met Jesus in the woman who shared her jacket with me when I was shivering.

I met Jesus in the woman who gave me a look of utmost gratitude when I offered to walk behind her in line to cover her because her pants ripped open exposing her bum when the police took her in.

I met Jesus in the woman who was arrested for crying too loudly and uncontrollably at her brothers hearing.

I met Jesus in the woman who called the cops to protect her from her ex-boyfriend; she got arrested, and he went free.

I met Jesus in the woman who was so inspired by the Poor Peoples Campaign and that we were there with her in jail; she kept asking for more stats. (like did you know that 51.9% of US children under the age of 18, that is 38,200,000 children, are poor or low income? Or did you know that 10, 002 people died in 2017 while waiting for the judge’s decision on their disability benefits application?).

I met Jesus in the woman who joined in when I initiated a game of 20-questions, leaving us laughing when we could not guess the word ‘deodorant’ even with the hint “I promise you, there is none of this in this cell.”

I met Jesus in the woman who named the violence of the system when she said “why does it feel like all the criminals are out there? And the victims in here?”

I met Jesus in all of the women who shared their stories and supported each other by listening to the intense pain they had gone through.

Those 14 hours in jail were intense, worldview shifting, hours. I was humbled, honored, helpless and hopeful. I joined the Poor People’s Campaign: A National Call for Moral Revival because I wanted to follow Jesus, and I was surprised to meet him in the putrid overcrowded jail cell.

One thought on “Why Would I Do This?”