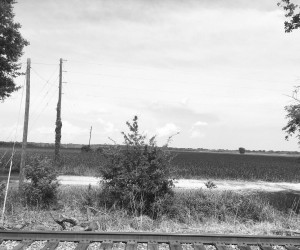 Pilgrimage Reflections: The Gospel and the Politics of Race

White gravel crunched under our feet. Body weight shifted to stabilize the self while beholding evidence of history that destabilized the world.

We stood facing nascent corn stalks that stretched on for miles. Deep in this field once stood a four-bedroom house, the home of 64 year-old Rev. Mose Wright, the uncle of 14-year old, Emmett Till. The reverend was a sharecropper, a farmworker that turned over a portion of his crops to the plantation owner G. C. Frederick each season to remain on the land. The Southern system forced sharecroppers to borrow money from the plantation store to access the tools and equipment necessary to harvest the crop. These emancipated families were enslaved again by debt.

The crop then was cotton—Mississippi King cotton to be exact. It was the same seed that fueled the “second Middle Passage,” which transported nearly one million enslaved souls from the Upper South to the Deep South in the years between the signing of the Declaration of Independence and The Civil War.

Emmett Till boarded a bus in Chicago, bound for Money, Mississippi in August 1955.

Mr. Charles McLaurin, Mississippi Civil Rights Movement organizer, was our guide that day in May 2018. Standing in front of rubbled remains of the Bryant Grocery and Meat Market, Mr. McLaurin shared the story of Emmett Till. Pastors, professors, activists and students from across the U.S. gathered around. We were on a one-week pilgrimage to understand the message of The Gospel at the intersection of politics and race. Money, Mississippi was our second stop after beginning our journey in the hallowed halls of the Equal Justice Initiative’s Legacy Museum and walking its labyrinth companion, the National Memorial for Peace and Justice (otherwise known as The Lynching Memorial) in Montgomery, AL.

Mr. McLaurin shared details we hadn’t heard before—details that shrank the narrative gap. Emmett Till had survived polio as a child and had a speech impediment. He was a stutterer. He was a visitor, unfamiliar with the abject brutality of Southern white supremacy. He was trying to impress new friends who dared him to ask Mrs. Carolyn Bryant for a date. With typical early-teenage bravado he said he could get a date with her, but when he entered the store this stuttering young boy simply bought a piece of candy and left. Thinking he did make advances, his daring “friends” ran away, leaving the impression that he had just done something wrong.

With our backs to Bryant Market, we gazed across the two-lane highway and the train tracks and the raised gravel road that lined the field. According to Timothy Tyson’s The Blood of Emmett Till, it was here that Carolyn Bryant, her husband, Roy, and his half-brother, J.W. Milam who carried an Ithaca-brand U.S. Army issued .45 caliber semi-automatic strapped to his hip, drove their pickup truck along the gravel road to Rev. Wright’s home on August 28, 1955—days after the incident in the store. Rev. Wright came out to meet them. They demanded the boy and eventually barged into Wright’s home, snatching Emmett from his bed. Carolyn identified him. They tied him up, laid him in the back of their truck and took him away into the darkness.

They took him to an old plantation willed to one of the men’s family. I don’t think Emmett understood the situation he was in,” said Mr. McLaurin. “He was from the north. He didn’t understand the brutality of Mississippi.”

McLaurin continued, “I don’t think Emmett thought they were going to hurt him at all.”

According to Tyson they pistol whipped him. They beat him for nearly an hour. They gouged out his eye. They ripped off part of his ear. They broke his femur and crushed his skull. They drove his not-dead and not-unconscious stripped body 10 miles across the county line to the Tallahatchie River. They attached a 70 lb. cotton gin fan to his body with razor wire and shot a .45 caliber bullet into his head. Then they dumped Emmett in the river.

Carolyn Bryant confessed to Tyson in a 2008 interview that she had lied: Emmett had done nothing to her.

Ten of the 22 of us on the pilgrimage were people of African descent—from the diaspora; African-American and Latinx. I invited those of African descent to join me in a special ceremony at the edge of the field. Those of European descent stayed by the Bryant Market, watching and praying.

We stood there, gravel beneath our feet. With a sea of corn before us, we knew that beneath the corn lay soil. Mixed in that soil was the blood of Emmett Till, the sweat and tears of his ancestors, and the cries for freedom of centuries of enslaved Africans. One by one, we gave thanks to these ancestors. We acknowledged their struggle. We thanked them for struggling. We acknowledged our accountability to them. Then we walked to the field and poured libations—water—a symbol of life for those whose struggle gave life to us.