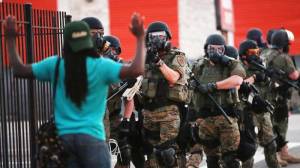 An excerpt from The Washington Post (8/22/18), reporting on what the data is saying about police militarization.

A new study published in the Proceedings of the National Academy of Sciences has found that there’s little upside to militarized policing. The study looked at data from Maryland, where a state law required that police agencies in the state submit biannual reports on how and how often they used their SWAT teams. The law was in effect from 2010 through 2014, after which the legislature allowed it to expire. Author Jonathan Mummolo performed a statistical analysis of the Maryland data and crime rates, officer safety data, and race.

…SWAT teams are usually justified with the argument that they’re needed to confront hostage takers, active shooters and other immediate threats to public safety (and situations in which SWAT teams tend to perform well), but in practice they’re mostly used to serve warrants on low-level drug offenders. The Maryland data showed us that 90 percent of SWAT raids in that state were to serve search warrants. Half of those were for nonviolent crimes, with the overwhelming majority of those being drug crimes. About a third of the raids resulted in no arrests.

Utah is the only other state to experiment with requiring police agencies to report on the use of SWAT teams. The first batch of numbers, released in 2015, showed that 83 percent of SWAT deployments were to serve search warrants for drug crimes. Less than 5 percent of deployments were in response to a violent crime in progress. Just three of 559 reported raids — or 0.5 percent — turned up illegal firearms.