By Tommy Airey, co-curator of RadicalDiscipleship.net and the author of Descending Like a Dove: Adventures in Decolonizing Evangelical Christianity 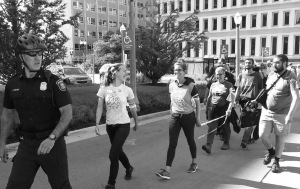 On that Spring day in Lansing, when Lindsay joined the band of holy rebels getting arrested for civil disobedience (right), I participated in civil discourse with a police officer hired to keep the peace at the peaceful demonstration. Despite the overtime pay, he wasn’t happy. He confessed that he was reluctant to support anyone too lazy to get off their butts to get a job. I shared with him the data—there are hundreds of jobs for hundreds of thousands of applicants. But he had a comeback: “No way. I see help wanted signs everywhere.”

During times like these, I feel a deep soul tension. I strive to recognize, despite our vast differences, my conversation partner’s indwelt dignity. But the reality is that he represents a pool of humanity highly unlikely to join in any authentic attempts to eradicate poverty. This isn’t apathy. It’s about my own recovery. The first step is there to remind me of my utter powerlessness over the preconceived notions and premeditated devotions of others.

The spirituality of Al-Anon is slowly prodding me to search below the surface of things. To seek to understand where the policeman is coming from. To cultivate genuine compassion. But Dr. King’s choice is ever before me: tranquility and the status quo or justice and humanity? The latter leads me back to those below the poverty line. There really is just one question concerning those “perishing on a lonely island of poverty in the midst of a vast ocean of material prosperity.” How did they get to the island?

Many agree with the officer that the secrets to success are work ethic, study habits, resiliency, obeying authority and staying clean and sober. That’s all it takes, they say. They point to exceptional achievements like Obama and Oprah. They claim that everyone has the opportunity to be just like them. I used to believe this. But this old script is no longer compelling.

I studied the system and visited the island. I have heard countless stories—at the soup kitchen, in the shelter, on the street and walking through homes that do not have running water. These outcomes don’t stem from sinners making bad decisions, but from powerful people scripting sinful polices that devastate poor communities.

Sure enough, the cop was right. “Help Wanted” signs are everywhere. They remind us of Jesus’ ominous warning that the poor will always be among us (Mark 14:7). As long as we are hard-hearted and tight-fisted with our policies, they always will be (Deuteronomy 15:7-11). Like cancer, structural sin has painful symptoms that must be tended to: homelessness, unemployment, predatory mortgage lending, climate catastrophe, pay cuts, slashed pensions, bloated utility rates, meager access to nutritious food and health care, dysfunctional democracy and Donald Trump. Help wanted!

But capitalism itself must be given an aggressive dose of chemotherapy.  The roots of this disease are watered by a large pool of exploited workers and a steady stream of extracted resources. This is why Rev. Dr. Martin Luther King charged that the whole system must be uprooted. Anything less is unconscionable. Fund education. End overseas military invasions. Mandate a living wage. Invest in health care. Create real jobs. Close prisons. Regulate the wealthy and powerful. Turn on the water. Action verbs are unavoidable.

Alternative facts that blame the victim simply cannot be tolerated—particularly from men dressed in uniform and those perched on pedestals. In fact, I’m learning that giving them any attention at all is a losing game. Sometimes silence is better than civil discourse. Right now, I need all the time and energy I can give to both transformative projects and the tending of my own soul. All I can do is follow the more-than-human (nature) and those chronically treated as less-than-human (women, queer folk, people of color). After all, these have been resisting and rising above the propaganda for millennia. They are the leaven in the loaf, summoning radical hope.