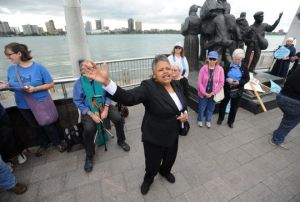 By Kim Redigan, an Advent reflection on Luke 3:1-6 for the Faith Outreach Committee of the People’s Water Board (Detroit, MI)

Today’s Gospel opens with a litany of the strong and mighty – the political and religious powerbrokers of their time. Ruthless men whose cruel governance in partnership with their corrupt religious lackeys oppressed the people in a thousand different ways. A violent alliance based on greed and domination with no tolerance for resistance or rebellion.

Does this sound familiar?

Today’s political and corporate tyrants embrace the same imperial imperative – to crush and control by any means necessary. Here in Detroit, water is used as a weapon in the hands of those who have crafted a well-woven matrix of subjugation and theft that includes water shutoffs and home foreclosures as part of a violent gentrification project that has created a diaspora of displaced citizens and a web of private security and surveillance systems to keep the people in line. As in the time of Jesus, many religious leaders either look the other way or are actively complicit, sometimes profiting handsomely from a relationship based on a mutual love of money.

But this is Advent, which means an invitation to turn away from the mind-numbing noise of downtown diversions and the superficiality of the commercial season. A time to get quiet and listen more deeply. A time to look to the margins where the water flows wildly and anything is possible. This is the promise of Advent.

And so it is this year that voices once again cry out in the desert.

On this Advent night, the voices of those directly affected by shutoffs are not stifled. Despite the heavy yoke placed on the backs of people by unscrupulous politicians who refuse to implement a water affordability plan, those who have struggled to keep the water flowing organize town hall meetings in their communities to build circles of resistance one neighbor at a time.

On this Advent night, a water-protecting pastor from the Brightmoor community has finished a week-long food basket delivery to families that included contact numbers for help with water billing issues.

On this Advent night, another pastor and a young activist hold vigil wrapped in torn blankets in the Ingham County Jail for standing in solidarity with the poor, including those whose children can be seized by the state for the sin of living in families that cannot afford to pay for water.

On this Advent night, friends in Flint continue to call out a governor and his accomplices who worship a god created out of the profits of poisoned water.

It doesn’t take a prophet to recognize these voices crying out in the wilderness for water justice. All it takes is a heart attuned to the real power in our world. Not the power of mayors and big money. Of presidents and prelates. There is another kind of power – resilient and bold – that lives on the edge of things.

Advent calls us to the desert where we can better hear the voice of the One who calls us to a bitter but blessed baptism of resistance to the tyrants of our time. Tyrants who have not yet learned to humble themselves before the sacredness of the water and the fierce tenacity of everyday people committed to waging love in the wilderness where the real power lives.