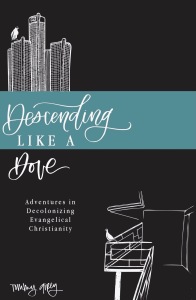 By Oscar Cole-Arnal (Oz)
A review of Descending Like A Dove: Adventures in Decolonizing Evangelical Christianity By Tommy Airey

As of April 4, 2018 I have lived a half century pilgrim’s existence hounded, kicked and prodded by the Spirit through weird and wonderful emissaries thereof.  Of course, she had to act this way, precisely because I am of that abominable character best described as a white old fart privileged male—you know that demographic who helped give our world the gifts of Donald Trump and Doug Ford.  So I say to the Spirit and her visitations to me—bring em’ on and more of the same.  Yes, as a young Lutheran pastor well on the road to pastoral and academic success in my first pastorate near Pittsburgh, my world became upturned by martyr’s blood, not my own, but that of Martin Luther King Jr.  With his shed blood pouring from Memphis into my heart, my family and I vowed to disdain our privileges and realign our lives after his model.  So we became civil rights and antiwar activists, strong supporters of Cesar Chavez’ boycott—going to jail, facing baton-wielding cops, having anonymous life threats and ending my paid vocational career in Waterloo, Ontario teaching Church History at the Lutheran Seminary there.  Since retirement, I remain active in a local group called the Alliance Against Poverty.

Although in every step of this journey, in spite of fears, ambitions and pain-in-the-ass arrogance, I could point out the Spirit’s surprises, I underscore now the most recent—that of the fine book by Tommy Airey entitled Descending Like A Dove: Adventures in Decolonizing Evangelical Christianity.  I discovered Brother Tom, quite by accident on the “Radical Discipleship” website, and immediately abandoned my “twelve-step” program to stop buying books and redistribute the saved money in radical anti-poverty Jubilee actions.  Although I refuse to blame the Spirit for such profligate behavior, She did manage to grip me through Brother Tom’s words and journey.  I suppose it would be pushing my luck with this relentless blast of Pentecostal wind to blame her for the four additional copies of Tommy’s book which are now in my hands.  Yet I do plan to pass out these four purchases among my co-radical on-the-street comrades.  So I leave you with a profound taste of Tommy’s compelling gift of that Pentecostal wind that has captured the expelled wind of this 77-year old fart (pun-intended):

While Roman citizens in Philippi placed their faith in Caesar, their Lord and Savior, whose imperial forces would protect them from barbarians from the north, the Philippian Christians pledged allegiance to Jesus.  Heaven for Paul was simply the anti-Rome.  It was the divine anti-imperial force of love, compassion, justice and kindness, incarnated in the body of a prophetic Jew who challenged the colonial script and its enforcers (p. 196).

So I leave you with one final appeal, while continuing to need the support of sisters and

Brothers like yourselves and Tommy, to stand like collected doves over against the Pax Americana and its Canadian sycophants by grabbing Brother Tom’s book and wielding it as both “shield of faith” and “sword of the Spirit” and going into battle well-armed to follow that “kick-ass” radical Galilean peasant Yesua bar Miriam.