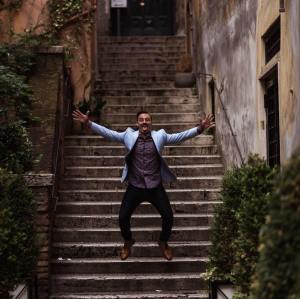 *This is the 15th installation of a year-long series of posts from contributors all over North America each answering the question, “How would you define radical discipleship?” We will be posting responses regularly on Mondays during 2019.

What is radical discipleship? As I reflect on this question, the image of deep-dirty soil comes to mind. As many contributors have reminded us via this wonderful online community of resisters, the word ‘radical’ comes from the Latin radix or radic meaning roots. Therefore, radical discipleship is the inherit, deep and primary essence of apprenticeship concerning the brown Palestine prophet and peasant. As the Rev. Dr. Miguel De La Torre reminds us in, The Politics of Jesús: A Hispanic Political Theology (Rowman & Littlefield, 2015), this is nevertheless saying “no” to Jesus.[1] That is, it is the rejection of a comfortable, gnostic, white supremacist savior. Radical discipleship is about going to the roots of our tradition, to recover the profoundly deep solidarity of Creator’s love demonstrated in the one who was crucified on Good Friday in unity with the crucified communities of our world.[2] However, it is also about going deep into the roots of who we are. It is about revealing the beloved community as the unique creation that the Creator birthed us to be. In my case, it is about being Latin-X.

From the outset, it is crucial to note that although the terms “Hispanic” and “Latino/a” are used interchangeably within the U.S., they do not represent the same collection of people but rather embody a diversity of people groups from Iberian, European, African, Native American and Asian dissent. As Edwin David Aponte notes, “[g]iven the diverse origins and complex history involved, it is difficult to speak of Latin Americans as a homogeneous group. And yet, all are incorporated into the Hispanic/Latina(o) ethnic group in the United States.”[3] Thus, although Hispanics or Latino/as share commonalities in geographic location and history, (i.e. the colonization by European Empires,) they make up a diversity of cultures, ethnicities, religions and languages.

Furthermore, labeling people with preconceived stereotypes and generic categories ignores their unique characteristics and limits their distinct contributions to society. The terms Latino/a and Hispanic not only fail to capture the uniqueness and diversity of the groups of people they aspire to represent, but these labels have historically been placed on this group thus creating a form of colonization whereby the group being named is only able to see themselves through the interpretive lens of the dominant culture.[4] Therefore, the term Latin-X[5] is a means of expressing the unique cultural and religious contributions from the myriad of communities that make up this portion of creation.

I agree with Dr. Michelle González Maldonado’s lecture entitled, “So Now We Are Latinx? Reflections on Race, Culture, and Identity within Latino/a Theology and Religious Studies”[6] whereby she argues that the term Latinx is predominately elitist, used by highly educated Latinas and Latinos in North America rather than the marginalized masses across the rest of the Americas, i.e., Latin America. However, I find the term useful as it is a gender-neutral alternative to the masculine. In a culture entrenched in maschismo (patriarchy) this term incorporates all of God’s family, even the gender nonconforming. Furthermore, it is a means of empowerment that allows for us to name ourselves rather than permitting the dominant culture the ability to name us.

Language shapes our imagination, which shapes our praxis. As a follower of Jesús, Latin-X is about digging down deep into the roots of our community to uncover a better way of being the beloved community that God has created us to be. It is about making Jesús presente, aka, what Dr. Ada Maria Isasi-Diaz (Mother of Mujerista Theology) calls the “kin-dom” or familia of God.[7] It is a means of embodying our faith in Christou. The “X” being the first letter in the Greek Christou, Latin-X is the way that our culture and community embodies the life and teachings of Jesús from a Latin perspective.

[2] Humanity and indeed all of creation.

[5] For more on the background of Latinx see this article:

[6] This lecture was delivered at the Hispanic Summer Program in 2018 and can we listened to here:

[7] The metaphor “kingdom of God” is rejected for the following reasons; 1) it is irrelevant today because we live in a world that hardly has kingdoms anymore, 2) it often invokes a history that has anti-Jesús values (religious wars, colonization, etc.), 3) it is gender exclusive as it refers to male sovereigns and reinforces the male image of God. Isasi-Diaz, “Indentificante con Nosotras: A Mujerista Christological Understanding,” 43-44.

Furthermore, Isasi-Diaz writes, “[i]n mujerista theology we believe kingdom is an ineffective and dangerous metaphor, for it suggests an elitist, hierarchical, patriarchal structure that makes possible and supports all sorts of systemic oppressions.” This not a reestablishment of the traditional nuclear family which represents private, individual group set concerned with boundaries rather than welcoming inclusively to all who make life pleasant and possible. Isasi-Diaz also notes the nuclear family is often more focused on production and accumulation rather than on family relationships. Ibid, 44-45.