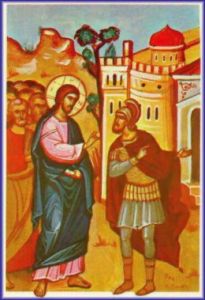 By Wes Howard-Brook and Sue Ferguson Johnson, on this Sunday’s Gospel text (Luke 7:1-10)

All the dynamics of this week’s passage from Luke’s Gospel are “wrong.” For instance, how are we to imagine Jewish elders in Capernaum speaking on behalf of a Roman centurion? Further, they paint him as the primary patron of their synagogue. And not only this, but the centurion sends the elders to Jesus, at this point in Luke’s narrative, an itinerant preacher and healer with no official authority at all. Finally, Jesus praises the centurion for having a faith that Jesus has not found among the people of Israel. What could be going on here?

Let’s take a step back and consider where this story fits in Luke’s wider narrative. It follows immediately after the Sermon on the Level Place (6.17, Gk, topou pedinos). The thrust of the Sermon—as with all of Luke—is the proclamation of jubilee, the great “leveling” that provides a fresh start for all, including the earth. At the heart of the Sermon is 6.27-35, Jesus’ extended reflection on the central command: “love your enemies.” Only Luke has Jesus repeat this command for emphasis (6.27, 35). Whereas Matthew’s Sermon on the Mount calls for his largely Jewish audience to engage in active, loving resistance to Roman repression, Luke is speaking to an audience likely comprised mostly of young Roman men, to whom he is appealing to reject their formation into the dominant culture and to claim the Way of Jesus instead.

Our current passage follows immediately after the end of the Sermon, where Jesus has contrasted a house built on a solid foundation with one built on no foundation at all. Some commentators have read Luke 7.1-10 as evidence of Luke taking a “soft” stance on the Roman Empire. However, in this narrative context, we can hear the passage for what it is: a shocking example of what “love of enemies” looks like in practice.

Let’s pay closer attention to the story’s details. One key element is that the centurion himself is never actually present. Twice he sends surrogates to engage Jesus. At first, this might seem to be a function of his lofty status: why go oneself when one has minions to do one’s bidding (a point the centurion concedes in 7.8). However, the true reason for his reticence emerges through the words of his “friends”: “I am not worthy to have you come under my roof” (7.6). This lofty representative of the occupying military force deems himself of lower status than this Galilean street preacher!

The passage reveals the way that the patronage system upon which the Roman Empire was built works. The Jewish elders appear to be “clients” of the centurion’s patronage. Their proclamation that he “built our synagogue” (7.5) doesn’t mean, of course, that the military man raised the beams and laid the bricks. Rather, it suggests that his financial support enabled the synagogue to be built. In exchange, the elders do their part, representing their patron to Jesus by declaring his “worth.” And shockingly, they add to this that the centurion “loves our people.” In other words, it is the centurion himself who is practicing love of enemies!

This is indeed a breathtaking claim. Imagine a group of local Afghans, for example, speaking on behalf of an American Army major “who loves our people,” so that the major can gain access to a local Afghan village healer. Or consider a Nazi officer being praised by local Jewish leaders. We can imagine Luke’s audience gasping as they heard this story for the first time.

From the centurion’s point of view, Jesus is the superior patron. The centurion’s need is desperate: one of his “honored” (7.2, Gk, entimos) slaves is on the edge of death. Nothing in the centurion’s Roman world can provide help. The centurion, having “heard about Jesus” (7.3), gambles his public reputation on behalf of the slave. He presents his need to Jesus via his clients, who publicly compromise his valued reputation on his behalf.

Jesus’ own response is equally shocking. He, like the Pentecost crowd (Acts 2.7), is “amazed” (Gk, ethaumasen) a word usually reserved for people’s responses to divine actions (e.g., Luke 1.21, 63; 2.18). He turns from the centurion’s clients to his own followers to express his shock that such faith could be found here, outside of the people of Israel. Without Jesus speaking the word that the centurion requested, his clients return to the house to find the slave healed. The centurion’s “house” embodies Jesus’ word to build on the solid foundation of enemy-love.

The story echoes in part another story already mentioned in Luke: the healing of the Aramean army commander, Naaman, by Elisha (2 Kings 5; Luke 4.27). But in that story, it is the foreign military man himself who is in need of healing. Here, it is a “mere” slave, yet one highly honored. In a few brief strokes, Luke’s story undermines the “ground” (see Lk 6.49) upon which Roman society was built: patronage, honor, and fixed social hierarchy. So much for being “soft” on the empire!

Our story calls us to a radical discipleship that remains shocking. Nothing is more “un-American” than loving enemies. And for all our national propaganda about “equality,” we remain deeply entrenched in a rigid social hierarchy that keeps immigrants, people of color and other “outsiders” near the bottom. Our presidential election cycle promises, regardless of the outcome, to continue both the “hate” of enemies and the maintenance of an unjust socioeconomic hierarchy. Even the “socialist” candidate promises to continue American warmaking, and has offered little more than to soften the hard edges of our economic stratification. The Way of Jesus remains, as always, a scandalous shock to the system.

In this Pentecost season, then, we must remember that it is only with the embodied presence of the Holy Spirit that we have any chance of garnering the courage and the clarity to live into this week’s Gospel. In our own locale, a group of courageous queer students and students of color have been occupying the Matteo Ricci College at Seattle University for two weeks now, seeking to be heard as they demand a just and inclusive curriculum. Facing into hate speech and death threats, they repeat the mantra: “we fight because we love.” (For more on this movement, see this) Their witness is a tangible expression of the power of the Spirit to en-courage people into dynamic witness that embraces all in the quest for justice. These students are not seeking to “defeat” enemies, but to push all parties into transformation that results in institutional and individual justice. May their witness, and the witness of many others around us, inspire all to engage Jesus’ shocking command to enemy-love. 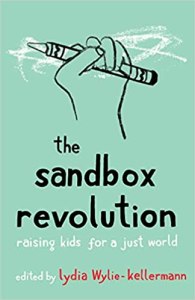