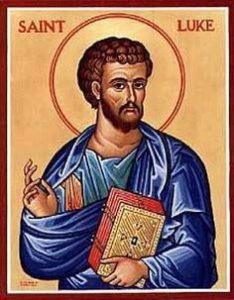 In the soporific summertime, it is easy enough to lie back, close one’s eyes, and fall into a tranquil sleep. Indeed, many of us could use more sleep, driven as we often are by the exigencies of empire into never-ending task mode. Perhaps ironically, getting more sleep could help prepare us for Jesus’ word to us this Sunday: stay awake (12.32-40)!

The church cycle offers us Lent and Advent as seasonal opportunities to practice anti-imperial wakefulness. With school out, though, the church year seems to take a break from the call to faithful vigilance. But the lectionary surprises us this week, just as Jesus’ message within the text from Luke gives us images of surprising arrivals. Perhaps equally surprisingly, a close listen to our Gospel text invites us to hear precisely what we are called to stay awake against: the lure of the exploitative, anxiety-ridden, imperial economy. At the same time, we are called to stay awake for the opportunity to be servants to one another and all creation.

As always, we must begin by re-placing the lectionary excerpt into Luke’s narrative context. Chapter 12 begins with warnings against the hypocritical “yeast” of the Pharisees, who would plant into would-be disciples the lure of wealth. Only Luke portrays the group as “silver lovers” (16.14). This may not accurately reflect the historical Pharisees, but that is not Luke’s concern. For him, the Pharisees are the foil that Jesus constantly confronts with his liberating Jubilee Word. They embody for Luke the set of imperial values that his Good News aims to counter.

Jesus’ response to the threat of Pharasaic yeast is a promise and a warning: empire’s cover will be blown, but disciples will at the same time be dragged before the authorities for standing with Jesus (12.2-12).

At this point, an anonymous man from the crowd rudely interrupts Jesus to demand that Jesus serve his own greed by making the man’s brother divide the family inheritance with him (echoing Martha’s demand of Jesus regarding her sister and setting up next week’s passage about division in the family, 12.49-56). This turns the narrative directly to the question of what Jesus calls “all kinds (Gk, pasēs) of greed”. We might not be used to thinking about greed coming in different categories, so to hear what Jesus means, we must continue to engage the narrative context. His first example, written about last week by Ched, is the “successful” landowner who revels in his own agricultural bounty, who is surprised by God’s sudden demand on his life, which leaves his abundance of wealth worthless. In our cultural context, his behavior may not only not seem greedy, but even prudent: he is “wisely” preparing for retirement! His “kind” of greed is falsely imagining that the earth’s God-given fertility is somehow “his” to possess purely for his own pleasure.

Before turning to creation for examples to the disciples of a healthy attitude toward one’s daily needs, Jesus centers this section with another warning: “So it is with those who store up treasures for themselves but are not rich toward God” (12.21). He then seeks to fend off a different kind of “greed”: the urge to hoard for fear of scarcity. If the “rich fool” represents the greed of the self-absorbed elite, the next passage engages the “greed” of the poor and marginalized. Both “kinds” lead people to put their focus on the wrong things. Jesus uses birds and flowers as examples of trust in God to provide “daily bread,” in contrast to the way of empire, which promotes an anxiety-driven obsession with “financial security” (12.30).

This all sets up this week’s passage, which begins with the final of six commands in Luke not to be afraid (1.13, 1:30, 2:10, 5:10, 12:7, 12:32). Disciples, then or now, need not be possessed by the imperial demon of fear-based striving for possessions because God yearns to “give you the kingdom.” As so often throughout the religion-of-creation story in the Bible (both in Hebrew Scriptures and the New Testament) what empire offers for sale is contrasted with what God offers for free (cf. Rev 18 and 21). Note how Jesus ironically engages this very pair in his next sentence: “Sell your possessions, and give alms.” This section then is tied to the previous one even more tightly by the repeat reference to “treasure”: “For where your treasure is, there your heart will be also” (12.34).

So far, so good: Jesus consistently denounces the fear of scarcity while calling disciples into deeper trust in God’s freely provided abundance. But a first reading of the following verses seems to knock this train of thought off the rails. In rapid succession (and continuing into the verses following this week’s lectionary passage), Jesus presents a series of images that almost seem to contradict themselves, and don’t seem obviously connected to the theme of avoiding greed:

The key to making sense of this seeming shift in the story is the question with which we started here: the call to stay awake. The first image, of the “lord” (Gk, kurios, matching Peter’s and the narrator’s address to Jesus, 12.41, 42) returning from the wedding banquet and being greeted at the door by “awake” servants, anticipates Jesus’ word at 14.8-24. There, Jesus tells a group of lawyers and Pharisees about taking the lower seats at a wedding banquet, then continues by telling the Pharisee who had invited him to invite not “your relatives or rich neighbors” but “the poor, the crippled, the lame and the blind” who cannot “buy” their way into the celebration. That scene ends with a disturbing parable about the imperial elite refusing to attend a banquet rumored to include such riff-raff (14.16-24). In our immediate passage, Jesus then offers a shocking twist: the returning lord “will gird himself (Gk, periezōsmenai) and have them sit down to eat, and he will come and serve them” (12.37). In other words, being awake means, in part, being ready to end the anxious pursuit of status and power over others (facilitated by the acquisition of wealth) and becoming a servant to the servants. As Jesus will tell the disciples at the Last Supper—where they are arguing among themselves about which one of them is the “greatest”— “For who is greater, the one who is at the table or the one who serves? Is it not the one at the table? But I am among you as one who serves” (22.27).

Immediately, though, Jesus reverses the metaphor. Rather than faithful, awake servants joyously awaiting the return of the lord from a wedding, we hear of a homeowner failing to be alert to the coming of a “thief” in the night. The mention of the threat of a thief links with Jesus’ comparison of treasure resting securely in God’s realm (“heaven”) rather than being exposed to the risk of moths or a “thief” (12.33). Jesus then slyly brings this back around to the disciples: “You must also be prepared, for the Human One is coming not at the hour you imagine” (Gk, hē hora ou dokeite).

This whole section participates in a structural joke Luke seems to be making here. This message about the coming of the Lord and the consequences of not being awake/ready would seem to “fit” at the end of his ministry, just before his Passion, as we find it in Mark (13.33-37) and Matthew (24.42-51). But Luke has put this right in the center of his Gospel, where one might least expect it. In other words, being awake against the lure of imperial greed (for wealth and for status) is not limited to the “big” moments of direct confrontation, but is part of the everyday life of discipleship on the Way of Jesus. Perhaps this is what the lectionary people had in mind by planting this passage in the center of summer, too.

And it is precisely during summer that we are bombarded with images accompanied by the siren sound of “vacation.” Not the life-giving, re-creative opportunity to enjoy family, friends and the earth via picnic-table fellowship, but the status-seeking and exorbitantly expensive call to luxury hotels (don’t notice the immigrant women of color who change your dirty sheets), tropical beaches (with any evidence of the exploitation of indigenous peoples hidden from view) and fancy food (don’t ask who grew or harvested it or how the earth was treated in the process). If we are truly seeking God’s reign, we must stay awake always to how greed, in its many forms, seeks to draw us into focus on ourselves rather than our siblings who are left outside the doors of imperial banquets. Jesus has told us clearly of what the kingdom God so yearns to give us consists: the “level place” where all are provided what we truly need as we come to practice Jubilee in community.

As summer continues to unfold, may we all keep our hearts and lives focused on where our true “treasure” is: in the realm of divinely-given abundance that is poured out for all creation as gift.

One thought on “Stay Awake”