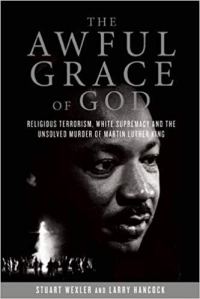 Late last month, Ruby Sales lobbed me my first reading assignment: The Awful Grace of God: Religious Terrorism, White Supremacy and the Unsolved Murder of Martin Luther King, Jr. by Stuart Wexler and Larry Hancock. Over the phone, she delivered a tutorial on its fresh relevance for late stage racial capitalism. We hung up a week before white men targeted Black and Brown bystanders in El Paso and Dayton.

As it turns out, the real terrorists are white Christians. The Awful Grace of God details the ways and means of white pastors and their KKK-congregants who conspired to kill Dr. King in the 50’s and 60’s. This clandestine movement fused religious passion, reactionary politics and the spirituality of hatred. By 1967, the price on Dr. King’s head was $100,000. The news of this rapidly circulated through federal prisons, where King’s supposed killer James Earl Ray was about to escape. Of course, this strand is still alive and well, but as King himself noted time and time again, the greatest tragedy remains “not the strident clamor of the bad people, but the appalling silence of the good people.” The grandest conspiracy of all is the collective denial of white supremacy in all its insidious forms.

For the past fifteen years, I have been studying the theological strands that scaffold this appalling silence. For the first twenty years of my Christian discipleship, I lived it. During the month of May, I embedded myself in a dozen Evangelical worship services in Central Oregon. It started with a 8:15am Sunday wake-up call at the hulking megachurch on the west side of the Deschutes River. The one with their own parking attendants. The coffee was free and fantastic. I sat in the first row, basking on the shore of a sea of singing white faces. I blended right in.

The first song portrayed God as an “unshakable” masculine “Hero of Heaven.” He conquers by being “above it all.” In between worship songs, the white Baby Boomer senior pastor proclaimed that the ultimate goal of the church is to get nonbelievers to think differently about God, Jesus and Christianity “not because we preach a certain way but because we serve a certain way.” When I came back for the coffee a few weeks later, their Millennial “Generations Pastor” stayed on message:

We are a church not marked by its policies, but in unity, together, in Jesus; we can all gather under the unity of Jesus in grace and mercy for all eternity.

Before the sermon, this is what we sang:

‘Til on that cross as Jesus died,
The wrath of God was satisfied
For every sin on Him was laid
Here in the death of Christ I live.

A few years back, the Presbyterians (PCUSA) petitioned to change the words of this song, tweaking “the wrath of God was satisfied” to “the love of God was magnified.” The liberals were dabbling in high heresy. In the white Evangelical narrative, nothing’s more important than the hellish impact of God’s wrath over human sin. We all need to get saved. Only the cross can purify us from a pissed off divinity. So the authors of the song vetoed the request. PCUSA exorcised the song from their hymnal.

In the face of overt racist gun violence, the vintage white Evangelical playbook combines civility and servant leadership with a story that saves us all from sin so we can go to heaven when we die. It is a popular priestly religion that strips Jesus of the prophetic fervor that flavors every page of the Gospels. In his instant classic The Cross and the Lynching Tree, the late James Cone lamented that an overwhelming majority of contemporary American Christians miss the main point of Jesus’ death because of their inability to connect its historical context to what mirrors present imperial realities.

Cone emphasized that Jesus’ death on the cross was not necessary. It was inevitable. As was the assassination of Rev. Dr. Martin Luther King Jr. When you are a “troublemaker” like King and Jesus, then folks feeling their privilege and power threatened will conspire to kill you. Cone calls white Americans to ponder a long-silenced perspective largely hidden from the Evangelical Christian masses. When they gaze at Jesus on the cross, Black Christians cannot help but see a God of love (not wrath) who intimately knows their deep sorrow. They are also reminded that the cross was a “public service announcement” from Roman imperial authorities: know your place…or else.

According to Cone, Jesus’ death was nothing less than a first century lynching, a brutal reminder to those on the margins that they’d better obey:

Historically oppressed peoples know for certain that civility, servant leadership and the gospel of sin management do not dismantle injustice and oppression. They never have. White Evangelical theology tackles America’s five hundred year racism epidemic with a defensive game plan that boils down to each individual simply being “not racist.” The KKK and Charlottesville and the Proud Boys serve as a convenient contrast to their good deeds and charitable foundations.

However, as professor Ibram X. Kendi points out, even the current occupier of the White House and the El Paso shooter have adamantly claimed that they are “not racist” either. In this climate, to be “not racist” does not hold any moral weight. Kendi challenges white audiences to move beyond the counterfeit category of “not racist” by becoming card-carrying “anti-racists.” This is an active, passionate, loving posture and practice. It goes on the offensive, seeking to transform the social, political and economic systems that produce massively racist outcomes. But being anti-racist requires us to confront inconvenient truths, both “out there,” but “in here” too. It is both political and personal.

Kendi’s work echoes Dr. King’s persistent call for white Americans to get in the game. In the words of King’s legendary “Letter from a Birmingham Jail,” white Christians continue to “stand on the sideline and mouth pious irrelevancies and sanctimonious trivialities.” Thoughts and prayers are tweeted as the status quo simmers. “I suppose I should have realized that few members of the oppressor race can understand the deep groans and passionate yearnings of the oppressed race,” King wrote, “and still fewer have the vision to see that injustice must be rooted out by strong, persistent and determined action.” King’s words, though, have always rang theologically hollow for white Christians. Social justice is a moot point in a world where the only thing that matters is a personal relationship with Jesus who died to save them for eternity. By faith alone, not by works. In fact, love and good deeds function as evangelistic tools to get people into the fold and saved for eternity.

However, the obsession with civility and servant leadership is not only a white Evangelical problem. White obliviousness on the Left manifests in the widespread obsession with just being nice no matter what. Meanwhile, any passionate critique of racism, capitalism or imperialism by “radicals” is denounced as being judgmental or even unloving. The supreme virtue of white liberal Christians is staying positive (no matter how negatively and violently a position is aimed at people of color ). This, too, is how the leaven of white supremacy mysteriously works through the American loaf.

Unfortunately, the multitudes are flicking away Christianity like a used up cigarette butt because they equate Jesus with his white American followers on the right and the left. Most of these post-Christians are not familiar with the liberative Christian strand that fueled the greatest social movement in American history: the Black freedom struggle. This minority report inspires daring acts that reflect a Power greater than ourselves who is totally committed to justice. This One is characterized by steadfast love (not wrath). For some, this prophetic call is too challenging. As a friend recently lamented to me, folks too often shun the radical Christian road that transcends liberalism and fundamentalism because they struggle to give up “the creature comforts and palatable exploitation” that empire provides–including the unearned (and mostly unexamined) benefits of their whiteness.

In 1979, a Congressional committee found ample evidence of conspiracy in King’s assassination. But neither Congress nor the Justice Department chose to act on the committee’s findings and recommendations. Conspiracies continue. And so, we must creatively struggle against both overt and covert forms of white supremacy with anti-racist conspiracies of our own. These are fueled by powerful theological concepts like confession and repentance, forgiveness and grace. We are complicit with racism–in our souls and in the structures that organize our lives. We can name it and claim it. But to do this, we must drop our needs for social approval and comfort. Because the cross of Jesus and the conspiracy to assassinate King remind us that our stubborn refusal to be silent might just get us killed.

2 thoughts on “Scaffolding This Appalling Silence”