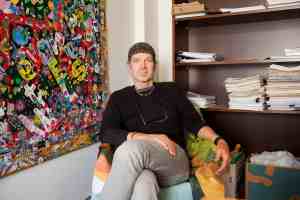 sometimes
standing on a stage of d-town city after
my black brothers or sisters have spit their joint
i feel thin
as a blade of grass, full of paint
white-washed
in the flash and taint
of my ancestors’ claims
to supremacy and land, nicety and cans
full of clams and black blood
and some days i stand dazed in the blaze of the breeze
of murmuring graves, seeing the lids slide open,
feeling the breath like sewer steam on a
winter cheek and my soul begins to peek
around the bend of the river under a cold moon
watching tecumseh canoe the straits, bearing
gourds and deer meat, firing truth straight
into my face, hoping i’ll wake from the dream
and i do, quaking in daytime fright
grasping the blight of a baked-head-hallucination
of rights and full tables, of woodward parades
of auto-company charades of mastery, rolling
over buried moccasins and living rhythms of
motown serenades and slum dog raps
on casket tops
calling the old ones back to the surface
like an army of undead soldiers on the rise, surprise!
coming to collect purses and bones
and i feel my neck shrink and my eye blink
and my throat choke before the flight sets in
and i try not to grin in terror like an inner george bush
suddenly making an outer appearance
through my flesh
i blush red
and flush gray
and tremble yellow
as the dribble of underarm trickle
makes my skin
quiver in cold blue shivers
this whiteness!

this whiteness
like a witness
to never-ending plunder
seeking to seep quietly
into every glance i would render, hoping
to be tender toward the colors
that refuse to surrender
to my fevered fever
and discover together a new planet but
the spell refuses to break
and the white cloaks the take
and the silence floats in again
like a fog
over the top of the screams.

i speak to my classroom and kin with resolve
at every turn about banks
and nooses, about cops and borders, about drones and kids with bones sticking through
their ripped pants, but the pay check still
arrives and the degrees behind my name
still open doors and the police still roar
past my buddy’s weed-scented car flooring
their fords to chase the poor kid on the bike
looking once more like a martin in a hoodie
wanting to be sure they get there before the block captain could
to plant their packet, fill their quota,
maintain their racket, and retire to the bar to
toss back a beer and pour a shot like a hot tody

this whiteness that kills, this whiteness that fills ceo pockets in the stadium of seats watching rockets off the bats of multihued jocks hired to wear high socks and lend their numbers to jackets turning tricks for the mack in the glass-closed box at the top of the stack of tiers

this whiteness i know has me
even if i do live in the city
as i pirouette in the place of sassy poetry
and flash an activist “pass”
of solidarity, trying to disguise my disgust
at my own continuing flush of compromise.
i despise the take, the make-over
the ever-flaking intention of my people to hide under suburban steeples and gucci, producing nickles with slave-holder faces celebrated
as tender and champions of independence like a hitler on a dollar bill, saluting goldman sachs without irony

i retch while i pay taxes for the fly boys in the darkened rooms to drop bombs on olive skins or zoom stocks through their banks
of computers locking prices into algorithmic mazes of phases of popped bubbles, while the bailiffs march and the investors laugh
and grandmas cry over their now homeless kids
and their own homeless lives

i long to be seen
outside this game

but one more time
i look in the mirror of color and leer and know
i have not yet dared to go
far enough back
through my tree
to an ancient family
yet living sustainably within a niche
of their own, not yet taking over others’

so far back
i get to the original feast, behind the fall
on the savanna full of mana and mothers
and the truth of us all
where black-skinned eve gives no leave
to the judgment calls her children
looking my hue to halt their cult of entitlement
rejoin the race and recirculate the take
face the hour’s demand and step forward
into a new kind of clan
putting a body in the way
of the bailiff
and a lifetime on the line . . .

offering whiteness as a sign of a time now gone
like a crime of the past getting solved
resolved to give the pale old rind its necessary decline into the remix of color
like a long-waited eclipse
of settler colonial hubris
a handcuffed fist of conquest
sentenced to release its grasp
give up its ghost and land theft
compost its fear in the new
dark soil like a nitrogen fix for the
copper-toned flash of the future
the fresh-faced host of re-birthing life
on-the-rise like a garden full of flowers
and corn
and youthful surprise.