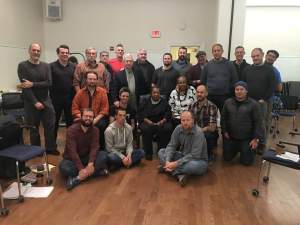 Note: this is a long working definition of Whiteness. Dr. Perkinson laid this down for a committee reflecting in the wake of The Council on the Way (right), an October 2019 gathering of white men envisioning and embodying a redemptive white male theology. The conversation over two days in Washington D.C. was conceived and coached by Ruby Sales, theologian and veteran of the Black Freedom Struggle.

What is whiteness? I would understand the paler shades of skin color that are typically referenced, when the term “whiteness” is used, as a kind of shorthand for a whole social system of infrastructure and expectation, as well as conscious/unconscious identification. It is a system that is rooted in European Christian colonialism taking land on this continent by force (either violent conquest or coercive legal imposition) from indigenous peoples and making much of that land yield “resources” by means of enslaved African peoples (as well as other coerced peoples of color, and to some degree even coerced lower and working class European heritage peoples).

Those lands and resources have been continuously reorganized by “white” political and economic elites into interlocking and mutually reinforcing social structures (a political system and manifold enterprises encompassing banking, transportation, housing, education, health care, criminal justice, etc.) that have explicitly (for much of the history of the country) or implicitly (in policy effects, even if not consciously intended) benefitted communities marked out visibly as “white” by skin tone, at the expense of people of darker tone.

Over time, that system has also given rise to shared cultural patterns and expectations among the beneficiary “white” peoples, which, despite some local differences, have taken root in a presumption of superiority over peoples of color in general, both here and abroad, affirmed in behavior either consciously or unconsciously, that also grants entitled access to many of the system’s opportunities and has led to regular aggression on other peoples’ “resources” around the globe. And in consequence, that shared cultural affinity has also tended to engender “disability” in terms of alienation from quite varied older European traditions of having lived well in place on the land back in Europe and in the form of ignorance of other peoples’ experiences, struggles and creativity.

As such, it has typically bequeathed to its adherents a “thin” or reduced capacity for rich emotional, spiritual connection and on-going respectful relationship with people who are different, in a modality of justly and sustainably sharing the earth as a commons, informed especially by indigenous wisdom both here and from the old country. In a word, whiteness is a lie, pretending to purity, erasing history and diversity, murdering the souls of Euro-heritage people in a slow motion constriction into sameness, bleeding out ancient beauty in favor of banal emptiness and increasingly rabid desperation.

A note from Wes: after 33 years of studying, teaching and writing on the Bible, I’ve felt a strong call to develop a 21st century, postpandemic means of inviting people into a deep engagement with the stories of our ancestors in faith. With no small irony, the idea developed out of my being forced to teach online all last school year, which led me to develop some basic skills in video production. I found that I could do it and enjoyed it very much! Here’s the link to the “trailer” video.