From from Amy Goodman’s interview with Naomi Klein on DemocracyNow (Sept 18, 2017).  This is Klein’s response to Goodman’s question:  When a disaster strikes, how is it dealt with, and what is it used as an opportunity for?

We need to respond to crises like this. They’re messages. They’re messages telling us that something is broken with the system. You know, these are not just natural disasters. These are disasters that have become unnatural, that have become unnaturally catastrophic, because of the impacts of climate change, but also because of the impacts of deregulation, because of inequality, of racial injustice. END_OF_DOCUMENT_TOKEN_TO_BE_REPLACED 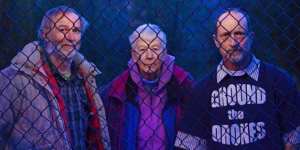 Video and report from Democracy Now!

Three peace activists who infiltrated a nuclear weapons site have been freed from prison after their convictions were overturned. In 2012, the self-described Transform Now Plowshares broke into the Y-12 nuclear facility in Oak Ridge, Tennessee. Known as the “Fort Knox of Uranium,” the complex holds enough uranium to make 10,000 nuclear bombs. The activists cut holes in the fence to paint peace slogans and threw blood on the wall, revealing major security flaws at the facility, which processes uranium for hydrogen bombs. The break-in sparked a series of congressional hearings, with The New York Times describing it as “the biggest security breach in the history of the nation’s atomic complex.” The three were convicted of damaging a national defense site. After two years behind bars, a federal appeals court recently vacated their convictions, saying the prosecution failed to prove the three intended to “injure the national defense.” All three were released this weekend until their resentencing on a remaining charge of damaging government property. They have likely already served more time than they are set to receive under their new sentencing.
http://www.democracynow.org/embed/story/2015/5/19/how_an_85_year_old_nun