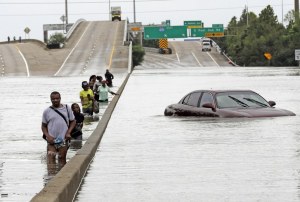 From from Amy Goodman’s interview with Naomi Klein on DemocracyNow (Sept 18, 2017).  This is Klein’s response to Goodman’s question:  When a disaster strikes, how is it dealt with, and what is it used as an opportunity for?

We need to respond to crises like this. They’re messages. They’re messages telling us that something is broken with the system. You know, these are not just natural disasters. These are disasters that have become unnatural, that have become unnaturally catastrophic, because of the impacts of climate change, but also because of the impacts of deregulation, because of inequality, of racial injustice.

And the oil industry is at the dead center of this. If we look at the way in which a storm turns from a disaster to a catastrophe, like Harvey, we see the impacts locally with the intersection of the floodwaters, with a deregulated oil and gas industry and petrochemical industry creating this toxic soup…And then you also have just the strength of the storm being stronger because of the global impacts of this industry and other industries, as well. So, the oil and gas industry is intensifying the impacts of the storm locally, on the—because of what the industry is doing in a city like Houston, and then globally, because of the cumulative impacts of burning all of those fossil fuels.

And then, who is in charge of the reconstruction but a former president of Shell Oil…We know how much of global emissions, more or less, come from that handful of fossil fuel majors. They should be in the dock, and not in charge. And here, I’m talking about Exxon and Shell and BP, and the core company, and, of course, the coal industry, that have so intensified this disaster.

So it really is a world upside down, where the people most responsible, who should, at the very least, be paying the bill for this disaster, instead are calling the shots and planning how the public’s money, which is really needed, should—in a sane world, it would be going towards paying for a transition to 100 percent renewable energy as quickly as technology allows, which is, in fact, very, very quickly, to be designed in a fair way, in a just way, which would mean that the people who have gotten the worst deal, whose communities have been poisoned by this industry, who have borne the toxic burden, would be first in line to own and control their own renewable energy, to get the jobs, you know, making sure that the workers who lose their job in this industry are retrained and ready to work in the clean energy economy. Well, do we really think that Shell is going to shepherd a process like that? Of course not. So we need a huge amount of pushback in this moment.