One day, as we were being taken handcuffed from the jail for a court appearance, a young nun who was a dear friend reached out her hand to mine in solidarity as we issued from the jail. One of the marshalls came forward in a swift, reptilian move. He crashed down between our hands with a karate blow. “Don’t touch!” It was the epitome of the system; he had said it all. 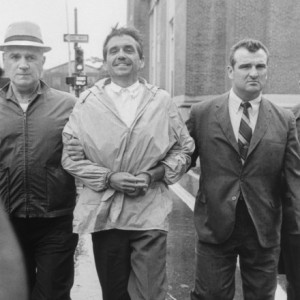 Four years later when the Berrigan brothers with seven others entered the draft board in Catonsville, MD, removed the 1A files (of those eligible for sending to the Vietnam War) and burned them with homemade napalm, those ashes too would eventually anoint my life and pastoral calling. Daniel turned that action toward liturgy, toward poetry. He edited the transcript of their conviction in Federal Court into a play of international repute, refused induction into the prison system, and went notoriously underground for four months writing and speaking from the “most wanted list,” before being captured by the FBI at the Block Island home of his friend William Stringfellow. When he was released after two years in the Federal system, Berrigan came to New York City and taught a course on the Apocalypse of St. John when I was a student at Union Seminary. Full disclosure: Dan Berrigan became to me not merely teacher, but mentor and friend. END_OF_DOCUMENT_TOKEN_TO_BE_REPLACED

By Ric Hudgens, for Daniel Berrigan, on his birthday

The story goes he walked to the podium declared “Know where you stand and stand there.” Then he sat down. 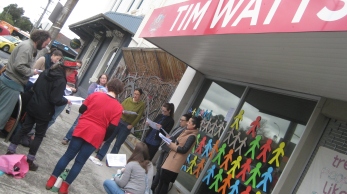 “Sing about it until it can be realised” said Ched Myers at the Kinsler Institute, a call to write, play and sing the songs of freedom until freedom is won . This is not a new idea, we sing in the tradition of so many justice movements: civil rights, suffragettes, apartheid, slavery… What songs are we singing that are calling us forward and giving us courage along the way – in this place, at this time, in this context? END_OF_DOCUMENT_TOKEN_TO_BE_REPLACED

Dan Berrigan, now of blessed memory, who crossed over to the ancestors and saints a year ago this month, has since been repeatedly quoted as saying, “If you want to follow Jesus, you better look good on wood.” Theology in a quip. He also said, though less famously, “It all started with the Resurrection…If only we would have stayed put!”

I love the particulars, the details of Matthew’s story of how Jesus refused to stay put – and more often than not, God is in the details. Let me mention a few unique to Matthew’s Gospel. END_OF_DOCUMENT_TOKEN_TO_BE_REPLACED

A Word to White Men by Bill Wylie-Kellermann