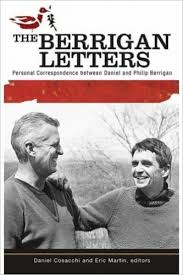 By Bill Wylie-Kellermann, written for On the Edge, A Detroit Catholic Worker paper

The Berrigan Letters: Personal Correspondence Between Daniel and Phillip Berrigan , arrived here by post unbidden from Orbis, just days before the news of Daniel’s death in NYC (+April 30, 2016+). I carried it east to the wake and funeral. It was soaked with rain in my pack during the procession from Mary House (NY CW) to the church.  Its stiff warp and wrinkle is a sweet remembrance.

The publication was initiated by Dan himself with such events on the horizon.  It is a gift, even if one that suffers from the haste of getting it into his frail and failing hands.

Even counting Berrigan-Merton and Berrigan-Dorothy Day, there is no relationship more significant to the rise of North American Christian conscience against warmaking than the fraternal love these letters trace. That the two, in collars, shared the cover of Time Magazine during the war in Indo-china is small measure.  Liz McAlister, Phil’s wife, contributes a preface which is the best possible account of that brotherhood, loving and precise.  (One might hope some day to see Phil and Liz’s correspondence, well edited, much of which would be from prison and some of which is already made notorious by the FBI).

Phil was the younger, though one might easily miss that guess – hardly the little bother. It was really he who pulled and cajoled Dan into the Catonsville Nine draft board raid (1968) as into the first Plowshares action at GE’s nuclear weapons plant in King of Prussia, PA (1980).  As he wrote after the former:

[Tom] Lewis and I can’t say enough about what it meant to have you with us.  Certainly the firey seven if not nine, looked to you for marvelous insights, good grace, and humor. ..You’ve meant the Church to me, at its best and noblest. And no one else has that asset and privilege, to the extent that I have. Luv ya. (May 25, 1968)

The letters begin with Dan’s earnest youthful piety in formation by the Jesuits, set beside Phil’s joining up with the Air Corps to fight in the Great War, and so precede both their conversions to nonviolence.  Dan early wrote a blessing: “To realize that the soldiering of this war is a vocation too – that would solve some of your difficulties and loneliness and the vague worries too shadowy for definition, wouldn’t it, Phil? …And your part is to play the game (as you are doing superbly) looking to Him Who was a good Soldier – unto death.” (Sept. 15, 1943) At warsend,  Philip hitchhiked to Woodstock to celebrate with song, drink, and a flag-borne victory procession around the seminary.

Two decades later, Phil is pioneering a new form of non-violent (even liturgical) direct action in the destruction of draft files.  As he explains to his brother, “Sorry I didn’t make the action clearer – it must have caused you great concern.  No, I would never do anything that would harm people physically – but the property that is part of these bloody gearboxes, thass another thing.” (Oct. 1967)

Their conversions were gradual, nurtured by racial struggle and travels – to Europe and the global south – all reflected.  But other sources would be needed to fully map that story. The glimpses are striking but must be sought in the fits and starts of archival availability. In some periods the letters are only in one of their voices; some periods (like 1943-51 or 1955-62) are pure silence. The care of saving or the changing of archivists figure in.

Toward the end Dan mentions visiting Dorothy Day in the forties, but she doesn’t come up in this correspondence until 1964. There is reference to Merton, but nothing about the famous Gethsemani peacemakers retreat in the fall of that same year. (Best to read this with Gordon Oyer’s recent account, Pursuing the Spiritual roots of Protest, in hand). Martin King’s Letter from a Birmingham Jail is highly lauded, but his “Beyond Vietnam” speech at Riverside Church, equally a watershed, or his assassination the following year  find no mention  – even though riots which the latter triggered fully interrupted for three days Phil’s trial for the Baltimore Four action.

What else is missing? I looked immediately for his time teaching at the University of Detroit in the early 70’s. Though it was a slightly harrowing experience for him, living it turned out above drug dealers in the downstairs flat, that was a time which seeded Day House and the Worker community here. Alas, it falls in a one-sided stretch where Daniel’s voice is absent.  Likewise for the years of the Underground Seminary which he helped shape with William Stringfellow, first in Massachusetts, then in Michigan. Be lovely to see his comments to Phil.

At least I trust so. Though archived, these letters were not written with an eye toward publication. Most have a newsy, casual, pointed and trusting intimacy. Phil, in particular, can occasionally drop a blunt aside about a friend, even a dear one, that in publication could sting with frankness. And Daniel can level the order or the academics with a deft swipe. This on teaching in Berkley:

Today 60 for the Revelation “seminar,” same sequence, I blatt for an hour, then groups. We’ll see. There is much disaffection on holy hill, the Jebs + others are now faced with an outpouring of folks and different footwork; their style is the immemorial bonhomie pipe puffing inconsequential banalities of the 60s, 50s, 40s, 30s, etc. I think they’ll just drag out the armadillo sleeping bags & crawl in. But maybe not. (Jan 1980)

The 80s are a period in which the two are archivally on the same page so the conversation is a lively back and forth. The energy of 1980, movement-wise, is amazing.  Jonah House was organizing weekly action at the Pentagon (in which the Detroit Peace Community, thereby named, participated). Dan, working the west coast, is steering students to the street and east. Though the brothers are necessarily circumspect and silent about the first “plowshares” as it approaches, it bursts into that scene taking direct action to yet another level and jumpstarting a movement still ongoing.  In its aftermath the letters show them playing inside/outside; with Phil and the seven being in, as in jail, and Dan working the outside, navigating and interpreting.

Dan once wrote to me: “Phil peddlies hardware, I peddly software.” A telling snip.

Their roles, their voices, like their handwriting differ. Phil – steady, neat, forward-leaning, clear. Dan’s a poetic and less predictable scrawl with color, illustrations, and marginal markings. Oddly, the collection includes no glimpse of either brother’s hand. I’m remembering that once, in a book from the underground days post-Catonsville, Dan himself published most of a letter from prison hand written on the inside cover of America is Hard to Find.

Phillip’s daughter, Frida, blurbed The Berrigan Letters with a caution:

Watch out! This book is going to make you pick a pen, paper, and envelope, and visit the venerable old Post Office…After reading these epistles, you will be compelled to write the people you care about and make indelible your affection and appreciation. You have been warned.

It’s not beside the point to note the downward spiral from email to facebook to twitter which so cheapens and corrupts our correspondence. We are technically seduced. Letter-writing as resistance? This book tells a relationship, a history, a style of faith and conscience in the world. But it also tells and urges a discipline of time, a discipline of relationship and community, a hand-made discipline of love.