From Chapter 24 of Howard Zinn’s A People’s History of the United States (2000).

Let us imagine the prospect-for the first time in the nation’s history–of a population united for fundamental change. Would the elite turn as so often before, to its ultimate weapon–foreign intervention–to unite the people with the Establishment, in war? It tried to do that in 1991, with the war against Iraq. But, as June Jordan said, it was “a hit the same way that crack is, and it doesn’t last long.” END_OF_DOCUMENT_TOKEN_TO_BE_REPLACED

An excerpt from the first chapter of Howard Zinn’s classic A People’s History of the United States of America (1980):

Columbus would never have made it to Asia, which was thousands of miles farther away than he had calculated, imagining a smaller world. He would have been doomed by that great expanse of sea. But he was lucky. One-fourth of the way there he came upon an unknown, uncharted land that lay between Europe and Asia–the Americas. It was early October 1492, and thirty-three days since he and his crew had left the Canary Islands, off the Atlantic coast of Africa. Now they saw branches and sticks floating in the water. They saw flocks of birds. END_OF_DOCUMENT_TOKEN_TO_BE_REPLACED

From the conclusion of “The Coming Revolt of the Guards,” chapter twenty-four of Howard Zinn’s classic A People’s History of the United States of America:

Let us imagine what radical change would require of us all.

The society’s levers of powers would have to be taken away from those whose drives have led to the present state–the giant corporations, the military, and their politician collaborators. We would need–by a coordinated effort of local groups all over the country–to reconstruct the economy for both efficiency and justice, producing in a cooperative way what people need most. We would start on our neighborhoods, our cities, our workplaces. Work of some kind would be needed by everyone, including people now kept out of the work force–children, old people, “handicapped” people. Society could use the enormous energy now idle, the skills and talents now unused. Everyone could share the routine but necessary jobs for a few hours a day, and leave most of the time free for enjoyment, creativity, labors of love, and yet produce enough for an equal and ample distribution of goods. Certain basic things would be abundant enough to be taken out of the money system and be available-free–to everyone: food, housing, health care, education, transportation. END_OF_DOCUMENT_TOKEN_TO_BE_REPLACED 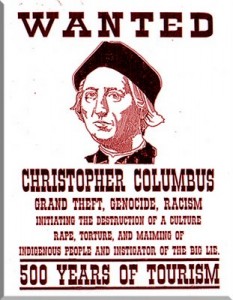 An excerpt from chapter one of Howard Zinn’s The People’s History of the United States (1980):

It is not that the historian can avoid emphasis of some facts and not of others. This is as natural to him as to the mapmaker, who, in order to produce a usable drawing for practical purposes, must first flatten and distort the shape of the earth, then choose out of the bewildering mass of geographic information those things needed for the purpose of this or that particular map.

My argument cannot be against selection, simplification, emphasis, which are inevitable for both cartographers and historians. But the map-maker’s distortion is a technical necessity for a common purpose shared by all people who need maps. The historian’s distortion is more than technical, it is ideological; it is released into a world of contending interests, where any chosen emphasis supports (whether the historian means to or not) some kind of interest, whether economic or political or racial or national or sexual. END_OF_DOCUMENT_TOKEN_TO_BE_REPLACED

Give people what they need: food, medicine, clean air, pure water, trees and grass, pleasant homes to live in, some hours of work, more hours of leisure. Don’t ask who deserves it. Every human being deserves it.
― Howard Zinn, Marx in Soho: A Play on History

From Howard Zinn’s The People’s History of the United States (1980):

The idea of saviors has been built into the entire culture, beyond politics. We have learned to look to stars, leaders, experts in every field, thus surrendering our own strength, demeaning our own ability, obliterating our own selves. But from time to time, Americans reject that idea and rebel.

From Howard Zinn’s A People’s History of the U.S. (Chapter 24: The Coming Revolt of the Guards):

However, the unexpected victories-even temporary ones-of insurgents show the vulnerability of the supposedly powerful. In a highly developed society, the Establishment cannot survive without the obedience and loyalty of millions of people who are given small rewards to keep the system going: the soldiers and police, teachers and ministers, administrators and social workers, technicians and production workers, doctors, lawyers, nurses, transport and communications workers, garbage men and firemen. These people-the employed, the somewhat privileged-are drawn into alliance with the elite. They become the guards of the system, buffers between the upper and lower classes. If they stop obeying, the system falls.

That will happen, I think, only when all of us who are slightly privileged and slightly uneasy begin to see that we are like the guards in the prison uprising at Attica—expendable; that the Establishment, whatever rewards it gives us, will also, if necessary to maintain its control, kill us.

Certain new facts may, in our time, emerge so clearly as to lead to general withdrawal of loyalty from the system. The new conditions of technology, economics, and war, in the atomic age, make it less and less possible for the guards of the system-the intellectuals, the home owners, the taxpayers, the skilled workers, the professionals, the servants of government-to remain immune from the violence (physical and psychic) inflicted on the black, the poor, the criminal, the enemy overseas. The internationalization of the economy, the movement of refugees and illegal immigrants across borders, both make it more difficult for the people of the industrial countries to be oblivious to hunger and disease in the poor countries of the world.