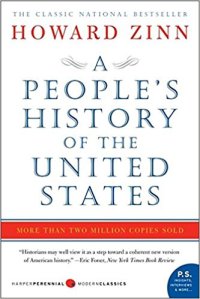 From the conclusion of “The Coming Revolt of the Guards,” chapter twenty-four of Howard Zinn’s classic A People’s History of the United States of America:

Let us imagine what radical change would require of us all.

The society’s levers of powers would have to be taken away from those whose drives have led to the present state–the giant corporations, the military, and their politician collaborators. We would need–by a coordinated effort of local groups all over the country–to reconstruct the economy for both efficiency and justice, producing in a cooperative way what people need most. We would start on our neighborhoods, our cities, our workplaces. Work of some kind would be needed by everyone, including people now kept out of the work force–children, old people, “handicapped” people. Society could use the enormous energy now idle, the skills and talents now unused. Everyone could share the routine but necessary jobs for a few hours a day, and leave most of the time free for enjoyment, creativity, labors of love, and yet produce enough for an equal and ample distribution of goods. Certain basic things would be abundant enough to be taken out of the money system and be available-free–to everyone: food, housing, health care, education, transportation.

The great problem would be to work out a way of accomplishing this without a centralized bureaucracy, using not the incentives of prison and punishment, but those incentives of cooperation which spring from natural human desires, which in the past have been used by the state in times of war, but also by social movements that gave hints of how people might behave in different conditions. Decisions would be made by small groups of people in their workplaces, their neighborhoods–a network of cooperatives, in communication with one another, a neighborly socialism avoiding the class hierarchies of capitalism and the harsh dictatorships that have taken the name “socialist.”

People in time, in friendly communities, might create a new, diversified, nonviolent culture, in which all forms of personal and group expression would be possible. Men and women, black and white, old and young, could then cherish their differences as positive attributes, not as reasons for domination. New values of cooperation and freedom might then show up in the relations of people, the upbringing of children.

To do all that, in the complex conditions of control in the United States, would require combining the energy of all previous movements in American history–of labor insurgents, black rebels, Native Americans, women, young people–along with the new energy of an angry middle class. People would need to begin to transform their immediate environments–the workplace, the family, the school, the community–by a series of struggles against absentee authority, to give control of these places to the people who live and work there.

These struggles would involve all the tactics used at various times in the past by people’s movements: demonstrations, marches, civil disobedience; strikes and boycotts and general strikes; direct action to redistribute wealth, to reconstruct institutions, to revamp relationships; creating–in music, literature, drama, all the arts, and all the areas of work and play in everyday life–a new culture of sharing, of respect, a new joy in the collaboration of people to help themselves and one another.

There would be many defeats. But when such a movement took hold in hundreds of thousands of places all over the country it would be impossible to suppress, because the very guards the system depends on to crush such a movement would be among the rebels. It would be a new kind of revolution, the only kind that could happen, I believe, in a country like the United States. It would take enormous energy, sacrifice, commitment, patience. But because it would be a process over time, starting without delay, there would be the immediate satisfactions that people have always found in the affectionate ties of groups striving together for a common goal.

All this takes us far from American history, into the realm of imagination. But not totally removed from history. There are at least glimpses in the past of such a possibility. In the sixties and seventies, for the first time, the Establishment failed to produce national unity and patriotic fervor in a war. There was a flood of cultural changes such as the country had never seen-in sex, family, personal relations-exactly those situations most difficult to control from the ordinary centers of power. And never before was there such a general withdrawal of confidence from so many elements of the political and economic system. In every period of history, people have found ways to help one another-even in the midst of a culture of competition and violence-if only for brief periods, to find joy in work, struggle, companionship, nature.

The prospect is for times of turmoil, struggle, but also inspiration. There is a chance that such a movement could succeed in doing what the system itself has never done–bring about great change with little violence. This is possible because the more of the 99 percent that begin to see themselves as sharing needs, the more the guards and the prisoners see their common interest, the more the Establishment becomes isolated, ineffectual. The elite’s weapons, money, control of information would be useless in the face of a determined population. The servants of the system would refuse to work to continue the old, deadly order, and would begin using their time, their space–the very things given them by the system to keep them quiet-to dismantle that system while creating a new one.

The prisoners of the system will continue to rebel, as before, in ways that cannot be foreseen, at times that cannot be predicted. The new fact of our era is the chance that they may be joined by the guards. We readers and writers of books have been, for the most part, among the guards. If we understand that, and act on it, not only will life be more satisfying, right off, but our grandchildren, or our great grandchildren, might possibly see a different and marvelous world.