From the first chapter of Howard Zinn’s classic The People’s History of the United States (1980). For Indigenous People’s Day.

Because of Columbus’s exaggerated report and promises, his second expedition was given seventeen ships and more than twelve hundred men. The aim was clear: slaves and gold. They went from island to island in the Caribbean, taking Indians as captives. But as word spread of the Europeans’ intent they found more and more empty villages. On Haiti, they found that the sailors left behind at Fort Navidad had been killed in a battle with the Indians, after they had roamed the island in gangs looking for gold, taking women and children as slaves for sex and labor. END_OF_DOCUMENT_TOKEN_TO_BE_REPLACED 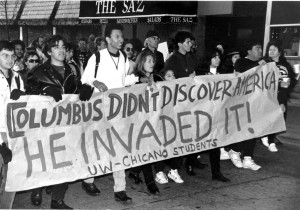 An excerpt from the first chapter of Howard Zinn’s classic A People’s History of the United States of America (1980):

Columbus would never have made it to Asia, which was thousands of miles farther away than he had calculated, imagining a smaller world. He would have been doomed by that great expanse of sea. But he was lucky. One-fourth of the way there he came upon an unknown, uncharted land that lay between Europe and Asia–the Americas. It was early October 1492, and thirty-three days since he and his crew had left the Canary Islands, off the Atlantic coast of Africa. Now they saw branches and sticks floating in the water. They saw flocks of birds. END_OF_DOCUMENT_TOKEN_TO_BE_REPLACED

Katerina Friesen is a recent graduate of Anabaptist Mennonite Biblical Seminary, Elkhart, Indiana. She is a writer and community builder, and currently serves as the interim pastor of Belmont Neighborhood Fellowship in Elkhart.

The largest gathering of Native American tribes in over a century is happening near Cannonball, North Dakota, about a mile from the Standing Rock Sioux Reservation. Tribes that were once divided are finding reconciliation and unity in a movement of nonviolent resistance to protect the sacred lands and waters of the Lakota Sioux.

From Sept. 16-23, I traveled there with a delegation of Mennonites from the Dismantling the Doctrine of Discovery Coalition to show support and solidarity with the thousands of people resisting the Dakota Access Pipeline (DAPL), slated to carry over 450,000 barrels of crude oil per day from the Bakken shale of North Dakota to refineries in Illinois, over 1,100 miles. Our delegation included Anita Amstutz, John Stoesz, Ken Gingerich, Maria Thomas, and I, stayed at the Sacred Stone Camp, the first of the three main camps where between 5,000–7,000 people were estimated to have camped during the week we visited. END_OF_DOCUMENT_TOKEN_TO_BE_REPLACED