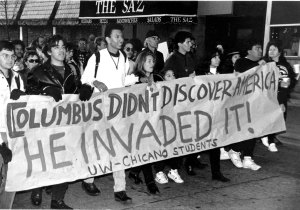 From the first chapter of Howard Zinn’s classic The People’s History of the United States (1980). For Indigenous People’s Day.

Because of Columbus’s exaggerated report and promises, his second expedition was given seventeen ships and more than twelve hundred men. The aim was clear: slaves and gold. They went from island to island in the Caribbean, taking Indians as captives. But as word spread of the Europeans’ intent they found more and more empty villages. On Haiti, they found that the sailors left behind at Fort Navidad had been killed in a battle with the Indians, after they had roamed the island in gangs looking for gold, taking women and children as slaves for sex and labor.

Now, from his base on Haiti, Columbus sent expedition after expedition into the interior. They found no gold fields, but had to fill up the ships returning to Spain with some kind of dividend. In the year 1495, they went on a great slave raid, rounded up fifteen hundred Arawak men, women, and children, put them in pens guarded by Spaniards and dogs, then picked the five hundred best specimens to load onto ships. Of those five hundred, two hundred died en route. The rest arrived alive in Spain and were put up for sale by the archdeacon of the town, who reported that, although the slaves were “naked as the day they were born,” they showed “no more embarrassment than animals.” Columbus later wrote: “Let us in the name of the Holy Trinity go on sending all the slaves that can be sold.”

But too many of the slaves died in captivity. And so Columbus, desperate to pay back dividends to those who had invested, had to make good his promise to fill the ships with gold. In the province of Cicao on Haiti, where he and his men imagined huge gold fields to exist, they ordered all persons fourteen years or older to collect a certain quantity of gold every three months. When they brought it, they were given copper tokens to hang around their necks. Indians found without a copper token had their hands cut off and bled to death.

The Indians had been given an impossible task. The only gold around was bits of dust garnered from the streams. So they fled, were hunted down with dogs, and were killed.

Trying to put together an army of resistance, the Arawaks faced Spaniards who had armor, muskets, swords, horses. When the Spaniards took prisoners they hanged them or burned them to death. Among the Arawaks, mass suicides began, with cassava poison. Infants were killed to save them from the Spaniards. In two years, through murder, mutilation, or suicide, half of the 250,000 Indians on Haiti were dead.

When it became clear that there was no gold left, the Indians were taken as slave labor on huge estates, known later as encomiendas. They were worked at a ferocious pace, and died by the thousands. By the year 1515, there were perhaps fifty thousand Indians left. By 1550, there were five hundred. A report of the year 1650 shows none of the original Arawaks or their descendants left on the island.

The chief source-and, on many matters the only source-of information about what happened on the islands after Columbus came is Bartolome de las Casas, who, as a young priest, participated in the conquest of Cuba. For a time he owned a plantation on which Indian slaves worked, but he gave that up and became a vehement critic of Spanish cruelty. Las Casas transcribed Columbus’s journal and, in his fifties, began a multivolume History of the Indies. In it, he describes the Indians. They are agile, he says, and can swim long distances, especially the women. They are not completely peaceful, because they do battle from time to time with other tribes, but their casualties seem small, and they fight when they are individually moved to do so because of some grievance, not on the orders of captains or kings.