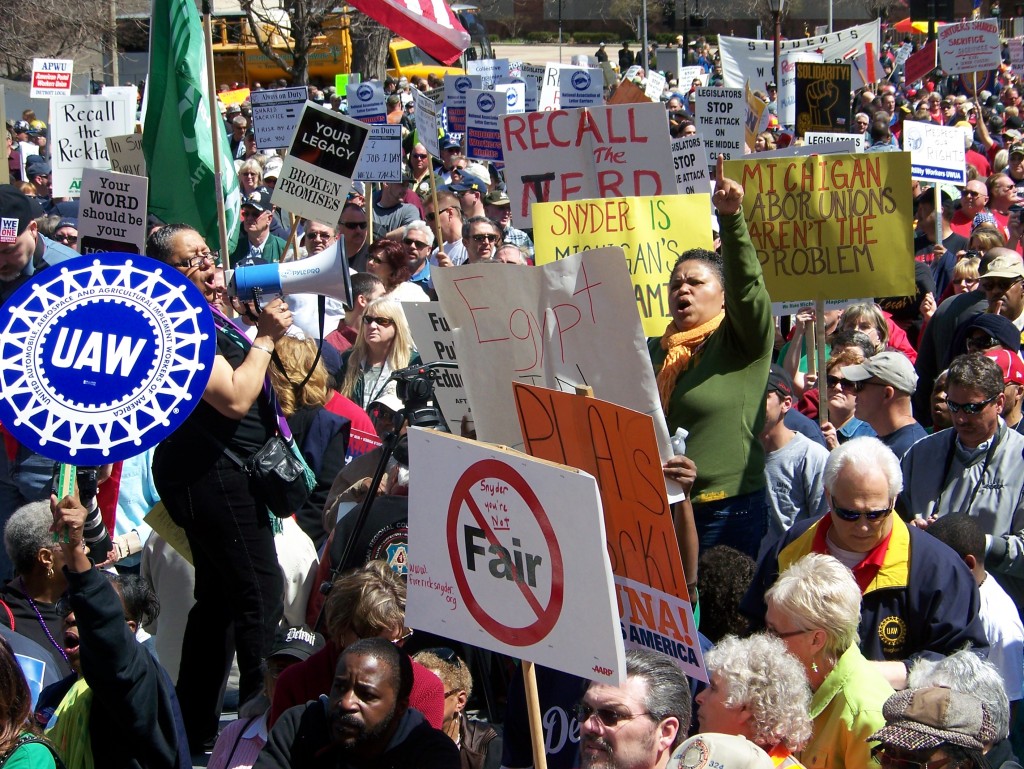 The year was 1968.  Almost five hundred women from the feminist and civil rights movements had gathered outside of Boardwalk Hall in Atlantic City, New Jersey to protest the Miss America pageant.  The organizers of the protest were opposed to the objectification and mistreatment of women and saw the Miss America pageant as an embodiment of so much that was wrong in our culture.  But they also saw the pageant being linked to other major social ills like racism (no woman of color had been allowed to participate), war (the Miss America winner would go ‘visit the troops’ in Vietnam) and materialism (because of all of the products that women were encouraged to buy to be ‘beautiful’).  So they literally crowned a live sheep Miss America to represent how women were being treated like livestock, threw objects of female oppression – like girdles, curlers and tweezers – into trash cans (no bras were burned, for the record, but women got blamed for it anyway!), they sang songs, and even secretly made their way into the actual Miss America pageant and unfurled a banner from the balcony that read “Freedom for Women”.   Their actions caused quite a stir to say the least. END_OF_DOCUMENT_TOKEN_TO_BE_REPLACED

By Chelsea Forbrook, a Spiritual Director, and Liberationist-Buddhist-Universalist-Mystic-12 step-Queer-Christian. Playing with questions, answers, and surrender.  Re-posted with gratitude and permission from Spiritual Subversive: a blog for 21st century seekers.

With the deluge of social media posts using #Metoo, women are hoping that men will finally understand that sexual assault and harassment happen to us on the daily. Perhaps they will wake up to the fear that women have internalized and had to accept as “normal.” Thankfully, I have not (thus far) experienced the horror of rape or physical assault. I have, however, experienced harassment as regular as sneezes during allergy season. Think I’m exaggerating? Think again. Here’s a (partial!) list of my experiences:

~ After hitting puberty, I wore baggy pants and large shirts for 15 years in an attempt to keep roaming eyes and inappropriate comments away from me. It didn’t work. So I chopped off all my hair, and lots of people assumed I was a lesbian. It still didn’t work.

~ I bike everywhere, as opposed to taking public transit, because it has reduced the amount of street harassment I experience by about 90%. My bike makes me feel safe and free. However, there are still plenty of guys who shout at me while I’m riding past, “Hey girl, ride that bike a little slower for me!” or “Damn, girl! You look good on that bike!” or the classic dog whistle followed by “Hey girl, come back here and go on a ride with me!” Sigh…

~ I used to ride public transit for three years, and I was sexually harassed every day, often multiple times a day while waiting at the bus stop. Everyone wanted my phone number, and everyone had comments about my ass or my weight. One stranger walked up and said, “Ooo, I really want to suck on those sexy toes,” and I was even solicited twice for prostitution (while fully covered and wearing baggy clothes, breaking out in profuse acne, and sporting dirty dreadlocks. In case you were wondering, it’s not about what she wears.).  Everyday before leaving the house I took deep breaths and prepared a response to this verbal abuse. Hyper vigilance became the norm.

~ I once had a van full of men try to kidnap me on a Sunday morning at 10am. They used a woman to try to lure me inside by having her ask me for directions. Luckily, my intuition told me to run right before the guy tried to reach out and grab me, and I was close enough to my church to find Sanctuary.

~ I got a dog for many reasons, one of them being so that I could walk alone around my neighborhood and feel a little safer. Even though I trust Chancho would try to protect me, I always bring my wallet with me when I walk, because I know I could end up dead and pantless in a country ditch somewhere and I want my ID there to make the identification process quicker. This thought feels quite casual, as it is routine. “Keys? Check. Phone? Check. Wallet-in-case-I get-raped-and-die? Check. All right Chancho, let’s go!”

~ I have been dumped because I didn’t wear tight enough pants. I have been dumped because I was “too old to be a virgin” at age 23. I have had a partner not believe that my “no” actually meant “no.” I have found out 5 times that the guy I thought I was dating actually had another real girlfriend, and I was just for fun. I have been cheated on in a committed partnership twice. Every day it’s a struggle to convince myself that I am good enough, and that I deserve respect. Not because I’m some man’s sister or daughter, but because I am a human being worthy of respect. It’s hard to feel worthy and whole some days when my experience keeps telling me otherwise.