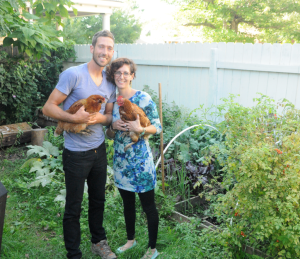 Watershed Discipleship Fridays continues with this piece from Kyle Mitchell, who lives with his wife Lynea on the 3rd floor of an old house in Cleveland. They have a couple egg-laying hens in the backyard and tons of red wiggler worms. Kyle spends his days working alongside folks with developmental disabilities on a 2-acre urban farm down the street from his house. In his spare time, he works alongside Lynea in the 2 youth gardens she started in the neighborhood. They are both passionate about growing food, spreading that knowledge, and figuring out ways to get healthy food to folks that don’t have access to it.
——————–
A few years back, I had a dramatic conversion experience. Someone introduced me to the act of picking berries. Since then, I’ve had a bit of an obsession with finding these delectable treats, both wild and cultivated. It’s hard to describe the revelation that takes place when you first begin to pick food off of a plant with your own hand and put it directly into your mouth, but I think Wendell Berry says it well in this short phrase:

Better than any argument is to rise at dawn and pick dew-wet red berries in a cup.

“Better than any argument” captures my attention, because while I don’t mind using intellect, I’m a terrible arguer. I prefer experiential learning or transformational experiences, and picking berries has been one of those for me. If I did have to argue the benefits, I suppose I could say that berries are good for you. They taste good. Picking wild berries for free seems a bit subversive, like cheating the system. It connects one with neighbors (I climbed a mulberry tree this year at a neighbor’s house, gave it a few shakes and watched the ripe mulberries fall off into our blue tarp below. Quite fun!)

It connects one with the earth. And in a day when many of us live in concrete-dominated cities (I live in Cleveland) and are seeking to be disciples in and of our bio-region, ingesting native wild berries (juneberries, mulberries, black raspberries to name a few in my watershed) joins us to the rhythms of our place – the rhythms of the sun, the soil, and the water that have teamed up to nourish the trees, brambles, and bushes that in turn nourish our bodies and spirits. In this we experience the tangible benevolence of the Creator, who looked and saw that it was indeed, very good.

One of my favorite spots to pick mulberries is behind an old, abandoned library. I try to imagine all the forces that have rendered this place useless, another human endeavor turned to rust and decay, forgotten and abandoned. I pick and eat, enjoying the shade of the mulberry trees that have watched all this happen, and continue to produce fruit that is indeed, very good.

One thought on “Watershed Discipleship: Transformation Through Picking Berries”