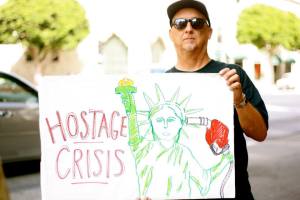 A theology of reclamation is about redemption–the healing of our individual, but more importantly our collective, humanity. It is thus, in the North American context, fundamentally concerned with the struggle to become a non imperial people, neither grandiose nor ashamed. It is about practicing discernment, honesty, dignity, community, and simplicity.
Ched Myers, Who Will Roll Away The Stone (1994)
—————
By Tom Airey

20 years ago, Ched Myers penned Who Will Roll Away The Stone: Discipleship Queries For First World Christians, his promised sequel to Binding The Strong Man (1988), the critically-acclaimed 560-page socio-political reading of Mark’s Gospel. Who Will Roll  was an inter-disciplinary bombshell for making sense of how followers of Jesus might live in the wake of “the 1st Gulf War” and the Los Angeles uprising of 1992. This underrated work from Myers (above, at a climate march in L.A. in September) deserves to be celebrated and, above all, read.

In short, Myers’ “interrogatory theology” requires a whole lot of deep questioning from those calling the United States home, or what he calls the locus imperii: the context of empire. But when we’re hearing from Myers, whether reading his scholarship, or joining he and his wife Elaine Enns for table fellowship after work in their backyard garden, it’s virtually impossible to stay on the surface. The content is deep and nourishing, utterly allergic to cliches and sound bites. Maybe it’s just because I’m an introvert and native suburbanite, but all of this demands a whole lot of extra space and time to discern the actual implications for my life.

Myers gets all his questions from Jesus himself, read through the lens of an umbrella of liberation theologies, challenging us all to view life through “the perspective of the periphery.” For First World Christians, this snatches the focus away from insular pieties like worship music, a personal relationship with Jesus & eternal salvation in heaven:

Mark’s Jesus is thus portrayed not as the answer to our private questions but as the question to our public answers.

Real repentance is required: a rigorous personal inventory that inevitably leads us away from ourselves towards a prophetic imagination of a world made anew. After all, for too long, our “repentance” has been obsessed with symptoms, while unforgiving systems (family, social, economic, political, religious) continue to create winners and losers out of us all. Drawing from Mark’s Gospel, Who Will Roll calls readers to go “radical,” getting to the “roots” of our sin (blindness, deafness & hardness of heart) & to commit to “spiritual disciplines,” transformed by socio-political sensitivities (Bible Study, Prayer & Liturgy).

This leads radical disciples in a journey of conversion, what Myers calls “discontinuity” (with Empire), a life committed to economic redistribution, social relocation & nonviolence (Gandhian satyagraha). This, of course, is all a bit too provocative, even heretical, for a religious establishment conveniently ignorant of race & class privilege and the destructive & dehumanizing legacy of capitalism. For starters, it is vital that this unspoken (& mostly unseen), trend is exposed.

In his introduction, Myers proposes 4 main reasons why so many imperial citizens “seek refuge in political ambivalence”:

1. As we continue to experience worldly comfort and privilege, we become more and more insulated from those for whom ‘the system’ does not work.
2. We assume that our socio-political structures are the lesser of evils and, unfortunately, cannot think of a better alternative.
3. We figure the contemporary political issues are too complicated for the church to deal with.
4. Christian leaders have struck an ideological bargain with secular capitalism, handing authority over the public sphere to the State in hopes of retaining a modicum of authority over the private sphere.

And so, those “blessed” with access to power cling to the status quo, sucked in by the centripetal forces of class-based comfort, a constructive constipation, a convenient complexity and/or the Capitalist Compromise.

One of the most profound interpretations & implications that Myers animates (and there are many) is his offering on Mark 5, the infamous story, unique to Mark’s Gospel, about the demonic possession of the man living in the graveyard. This story is a portrayal of “the profound connection between ‘internal’ and ‘external’ pathologies” that humanity suffers. The demon’s name is Legion, a clear allusion to the Roman military-industrial-complex that dominated 1st century Palestine. Myers explains:

He had fully internalized the spirit of empire, making him schizophrenic; he was so possessed by its pathological power that he could only live self-destructively…the dominating pattern of colonial violence was being reproduced in the pathological behavior of those living under the system.

Drawing on the biblical work of Walter Wink & John Howard Yoder (and plenty of others), combining the theological strands of his mentor Jim McClendon & liberation theologians and the sociological & psychological work of Frantz Fanon (and others), Myers connects the dots for 1st World readers: demon possession still matters!

But instead of it being solely a “spiritual” matter, it has everything to do with the systems that deal us oppression and entitlement. Our skyrocketing rates of mental illness don’t just happen. They are a result of Dr. King’s systemic giant triplets of evil: racism, militarism & materialism. As it turns out, when we look in the mirror, the Gerasene demoniac is staring back at each one of us:

If we accede to the imperial verdict, we will necessarily identify ourselves with those occupying forces of spiritual and military domination and become possessed by the rule of death. The stone blocking our path in this case is that of compulsive self-destruction: addictions, family violence, urban decay, ecocide. In the end our internalized oppression becomes so great that our greatest fear becomes liberation itself.

Myers commits the last few chapters of his work towards a constructive commitment to working for a whole new world, emphasizing a form of solidarity with critical analysis on gender, race and class, instead of the paternalistic charity favored in wealthy suburban churches and corporate-funded foundations.  He promotes an ecumenism that “invites each of the participating communities to draw more deeply from the wells of their own traditions by learning about the living waters of others,” while scripting the Tower of Babel story (Genesis 11) as a baptism into cultural diversity.  He also plants early seeds of a “watershed discipleship,” narrating a bio-regional focus of our theological work.  This “theology of re-placement” takes the form of both pain and promise, a vulnerable lamentation and love letter for his native California:

The rape of Vandenburg [Air Force Base] and Laguna are heridas that provoke in me particular sadness, rage, and shame, because neither has sustained the attention of organized resistance. Indeed I often question why my own work for justice has always focused elsewhere, why I have not fought more directly for the land that I love.

In fact, I was deeply moved when, a few years back, Myers demanded to drive a much longer, alternative route to Laguna Beach after I told him of the new housing developments scarring the mouth of Laguna Canyon, connecting the 405 with the formerly wide open Highway 133. He simply could not bear to witness it. The news produced in him a painful grimace, as if I told him I preferred La Victoria over his homemade, watershed-grown tomatillo salsa.

On a few occasions, I’ve spoken with Myers about the strange dynamic of his work in a culture obsessed with either-or politics & religion: blue-state/red-state, liberal/conservative, fundamentalist/mainline-denominational. Pastors and scholars of more Evangelical ilk have become scripted to cast him as a “liberal,” “too political” or even just plain “Marxist,” while those in more activist settings are uncomfortable with his critical, consistent & careful commitment to the Bible and prayer. After all, the locus imperii has become adept at utilizing dualisms to distract the populace from the crises that bell hooks has named imperialist white-supremacist capitalist patriarchy.  Myers’ “insomniac theology” can’t be pegged by imperial distinctions designed to lull subjects to sleep.

Published before Myers’ 40th birthday, Who Will Roll is more relevant than ever on the eve of his 60th birthday (to be celebrated with a Radical Discipleship Festival in February in Southern California’s Ojai Valley).  The L.A. riots have become symbolized in Ferguson, a “new Jim Crow” stalking young African-American males in our chocolate cities.  Desert Storm has morphed into a concoction from another Bush, an infinite war on terror, remote-controlled drones killing civilians half-way around the world.

Although rarely cited and often overlooked, Who Will Roll will gather steam in the decades to come as Jesus radicals seek out guidance, support and nurture in a theological source that masterfully blends history, psychology, biblical studies, sociology, economics, political science and ecology. This work is magnificently “theological” in the way of his mentor Jim McClendon, who prodded disciples to struggle towards “the discovery, understanding, and transformation of the convictions of a convictional community” and (here’s where Myers’ genius particularly shines) relating them “to whatever else there is.”

One thought on “Who Will Roll Away The Stone? 20 Years Later.”