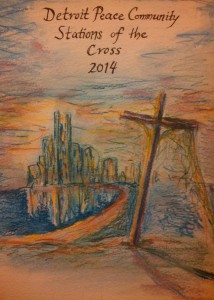 I learned the liturgical year as a child by where we put our bodies. Mondays in Advent were spent at Williams International where they were making cruise missiles and Good Friday was spent walking the streets of Detroit. This walk has been happening since before I was born and I’ve walked it every year of my life. As a community, we spend Lent thinking about where we see the Cross today. Where is crucifixion happening today. Then together on Good Friday, we name it out loud by taking our bodies and a wooden cross to those places.

Indifference to the Poor

Leader: Christ was pierced for our sins.

All: Christ was crushed for our offenses.

For our battle is not against flesh and blood, but against the principalities and powers, the rulers of this world of darkness.    Ephesians 6:12

Pope Francis frequently warns against indifference to the poor, an indifference he says is becoming globalized. He calls uf to acknowledge “the saving power at work in their lives and to put htem at the center of the Church’s pilgrim way. We are called to find Christ in them, to lend our voice to their causes, but also to be their friends, to listen to them, to speak for them and to embrace the mysterious wisdom which God wishes to share with us through them.” (Joy of the Gospel #198)

In Detroit today we are especially challenged to not become indifferent to the poor. In the enthusiasm to revitalize the city b creating new developments and renovating old structures, by encouraging more affluent people to reside here, there is a real danger the concerns of the poor among us will not be taken into account, will be met with person and civic indifference.

Here at Manna Community Meal the poor are not only fed, they are known. They are not anonymous. They are individuals with their own smiles and burdens. And it is out of such knowing that we are better able to recognize the existence of “principalities and powers,” conditions and structures that cause such inequality in our society, favoring some while oppressing many. And it is by acting on such knowing that we experience “the saving power at work in their lives.”

Song: Were you there when the poor helped us to see?

Leader: Christ was pierced for our sins.

All: Christ was crushed for our offenses.

Like the hum of a drone, war itself has become little more than background noise in a culture so steeped in violence that we seldom take notice of the killing being done in our name. With the advent of drone warfare, killing has become clean, easy, antiseptic. The same question asked of Jesus by James and John is asked by the President’s advisors each “Terror Tuesday” when target lists are devised:   Do you want us to call fire down from heaven to destroy them?

Like the rain of scripture that falls on the just and the unjust, bombs dropped by Predator and Reaper drones – in Afghanistan, Pakistan, Yemen, Libya, Somalia and beyond –fall where they will with chilling regularity.

While drone operators sit in front of their computers, peacemaker Kathy Kelly sits in federal prison for a nonviolent action against drone warfare. Like a voice in the wilderness, she offers witness: I have been with children while Hellfire missiles were aimed at their street and listened as U.S. Air Force planes shrieked through the skies overhead. I’ve been at the bedsides of children whose bodies were ripped apart, and I’ve been with families who have exhumed the bodies of their children and held funerary rituals. I’ve been with young teenagers accompanying their fathers and uncles to exhume the bodies of victims.

Drone warfare also takes a tragic toll on those involved in killing by remote control. Heather Linebaugh, a former drone imagery analyst, writes: I felt like I was haunted by a legion of the dead. My physical health was gone, my mental health was crumbled.

Drone warfare, like all warfare, is never justified. War is never the answer. Jesus rebukes his disciples for their desire to call down fire from the heavens. Are we listening?

Song: Where you there when they put their faith in war?