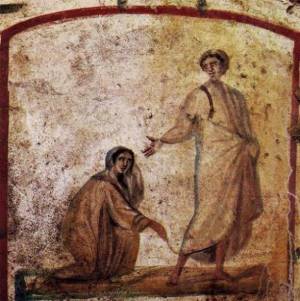 Touch, however, is always ‘touchy.’ It crosses boundaries. In U.S. culture, we have a presumption against touch. ‘Look, but don’t touch’ describes behavior toward objects, but is also used to describe relations between people…. Jesus … allowed himself to be touched by the bleeding woman who reached him through the crowd and the woman anointer at Bethany. He received Judas’ ambiguous kiss and the violent soldiers’ blows. After his death women touched him, washed him, rubbed oil into his skin, and wrapped his body in linens. Even resurrected Jesus said to Thomas, ‘Touch me and see. No ghost has flesh and bones like this. — Rose Marie Berger