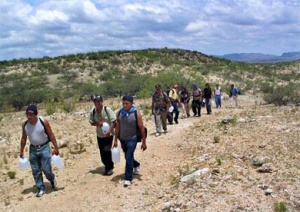 After a lengthy hiatus in John, the RCL gospel returns to Mark, though it piecemeals this Sunday’s text (I’ll read it whole, and suggest you do as well).

A summary scene sets up our episode: “They laid the sick in the marketplaces and besought Jesus that they might touch his garment…” (Mk 6:56). What ensues is a story that contrasts the Nazarene who seeks out human contact with the sick and unclean in the town square, and Pharisees who consider such public spaces threatening, so that “when they come from the marketplace do not eat before they purify themselves” (7:3).

Jesus again takes on the scribal-Pharisaic coalition over the issue of table fellowship and the Purity Code (7:1; see 2:13ff). This is a three-part episode:

The deeper question here is whether the table will be a place where in-group boundaries are maintained, or where the “outsider” is embraced. This controversy story is followed by two healings that provide object lessons in the principle of inclusion (7:24-30 and 31-37, the readings for Sep 6th).

The disciples apparently neglect certain purification rites at table (7:2). The washing of hands, produce and utensils had nothing to do with hygiene; it concerned the symbolic removal of impurity (7:3f). These rituals, together with exclusive dietary rules, functioned politically (defining ethnic identity) and socially (who one ate with and what one ate reflected one’s status in the class hierarchy).

The fact that Mark sets this debate in relation to the “marketplace” also suggests an economic dimension in the background. Pharisaic regulators were concerned that marketplace food had been rendered unclean at some stage (i.e. from seed sown on the Sabbath or fruits harvested without properly separating out tithes), and sought to control such “contamination.” Many Galilean peasants resented how these elite “middlemen” influenced processes of production, distribution and consumption of produce.

The Pharisees, in turn, are accusing the disciples of group disloyalty and defending their own social and economic status as Purity regulators. But here their charge is more specific: the disciples are ignoring the “tradition of the elders” (7:5). This referred to a body of legal interpretation that Pharisees claimed was handed down orally alongside the written Torah. Jesus refuses to recognize the authority of this oral law which legitimated Pharasaic social power, portraying it as “human tradition” in contrast to the “commandment of God” (7:8f). He then quotes a canonical text to underline his point (7:6f = Isaiah 29:13). The allusion is germane: Isaiah’s oracle denounces false prophets (Is 29:10) and people who “cannot read” (29:12), and contends that “the wisdom of their wise shall perish” (29:14)!

Jesus then invokes “case law” to illustrate how Pharisees “abandon the commandment of God and hold fast to human tradition” (Mk 7:9). He argues in 7:10 that Torah enjoins a responsibility to provide economic support for aging parents (see Ex 20:12), and condemns those who would try to escape this obligation by pronouncing a “curse” (see Ex 21:17). Apparently some were allowed to will their estates to the Temple by declaring them korban (7:11). Such vows of dedication froze one’s assets until death, at which point they were released to the Temple treasury. Because this practice leaves one’s parents financially ostracized, Jesus argues, the “vow” to the Temple becomes a “curse” upon the elderly (7:12), and “nullifies the command of God” (7:13).

Mark, who began this episode by linking the Pharisees with the Jerusalem scribes (7:1), will later indict both the scribal class and the Temple treasury in an economic system that exploits the poor (12:38-44). The principle here is the same we saw in earlier conflict stories: Jesus puts those who are vulnerable (in this case the dependent elderly) before the demands of institutions and the sophistry of the privileged. Mark is again trying to show how “piety” can pre-empt justice.
*************
All groups establish boundaries to determine who is in and who is out. Boundaries can be a good thing, such as when they help protect weaker people from domination by stronger people. But while this “defensive” function is usually cited as justification for boundaries, more often the actual relations of power are the opposite: boundaries function to protect the strong from the weak, protecting privilege and maintaining inequality. It is such boundaries that Jesus consistently challenges, as he does now with the Purity strategy of the kosher diet (7:14).

“There is nothing which goes into a person that can defile; only that which comes out of a person defiles” (7:15). This aphorism is immediately characterized as a parable, in which the physical body symbolizes the body politic (7:17). Jesus contends that social boundaries constructed by the Purity Code are in fact powerless to protect the integrity of the community. Real “contamination” arises only from within a community.
Mark’s editorial comment interprets this to mean that Jesus “declared all foods clean” (7:19). That is, the kosher diet must no longer function as a culturally exclusive boundary that proscribes table fellowship with non-Jews. Mark agrees with both Luke (see Acts 10:9-16) and Paul (see Rom 14): obstacles to building community with non-Jews must be removed. This will be confirmed by Mark’s next episode in which Jesus welcomes a foreigner “to the table” (7:24-37).

In conclusion Jesus gives his alternative: the true “site of purity” is not the body but the heart, the traditional moral center of a person in Hebrew anthropology (7:18-20). A vice-list follows, alluding in part to the prophet Hosea’s denunciation of public crime in Israel: theft, adultery and murder (7:21 = Hos 4:2). Jesus thus re-draws the lines of group identity: the ethnocentricity of the Purity code is replaced by the rigor of collective ethical self-scrutiny.

We should not underestimate how radical Jesus’ proposition was for first century Jews, themselves a marginalized, minority community within the Roman Empire. An analogy for modern North Americans might be declaring all borders open, and defining U.S. citizenship not by one’s passport but by one’s genuine commitment to the Bill of Rights!